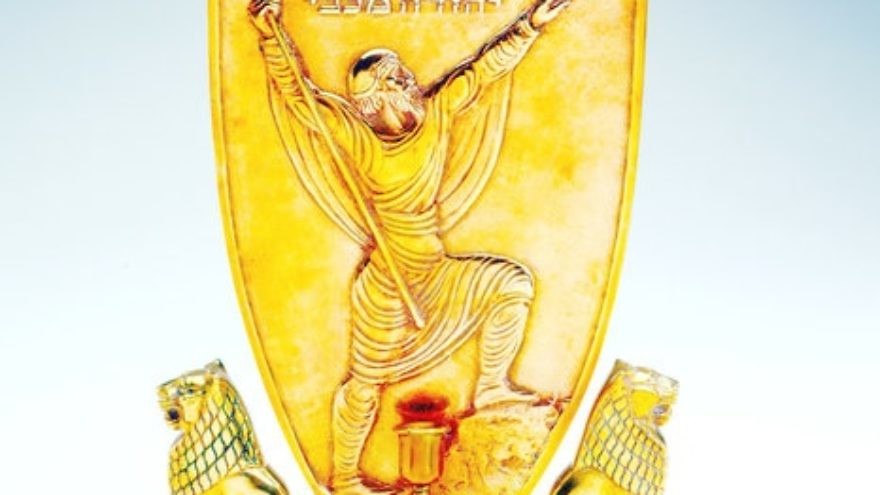 Jews around the world celebrate Hanukkah each year by lighting a menorah such as this one. Credit: The Jewish Museum, gift of Karl Nathan.
Republish this article
785 WORDS
Spread the word.
Help JNS grow!
Share now:

To the generation of European Jewish immigrants who came to the U.S. in the late 19th and early 20th centuries, Hanukkah was only a minor festival in a Jewish calendar with no shortage of holidays. But for their descendants who make up the overwhelming majority of those who currently identify as Jewish, it is the most popular and widely observed religious holiday.

The reasons for this are obvious. To an increasingly assimilated Jewish population, a holiday that involves no restrictions on food (unlike Passover) or any required time in synagogue (unlike Rosh Hashanah and Yom Kippur) has an edge. But the most important factor is its proximity to Christmas. Since the 25th of the month of Kislev in the Jewish calendar generally coincides with mid-to-late December, Hanukkah is the Jewish Christmas. That’s why the tradition of a small gift of gelt to children on Hanukkah became a full-blown Jewish component of the mass marketing end-of-year splurge.

For some observant Jews, this is just one more sign of the demographic apocalypse that threatens the non-Orthodox population.

Each national Jewish population study that has come out in the course of the last three decades has illustrated the growing toll of assimilation. In the most recent survey conducted by the Public Religion Research Institute (PRRI), the numbers tell of a precipitous rise—from 22 percent to approximately 33 percent—in the number of Jews who claim Jewish identity but don’t embrace Judaism as a religion. PRRI calls these people (who don’t answer “Jewish” when asked their religion but give other answers indicating their identity) “cultural Jews.” I think that term is less useful than the one that used to describe the same group in the Pew Research Center study published in 2013: Jews of “no religion.”

Jews of no religion are proud of their identity. But their conception of what it means to be a Jew has more to do with food and even comedy than essential elements of Judaism and Jewish peoplehood. Thus, for Jews of no religion, a holiday with a few parochial elements like lighting candles and food (latkes or jelly donuts) and no burdens, is an easy way to take part in the Christmas spirit of giving.

That leads scolds to complain about incorporating the vapid materialism of the American holiday season into Jewish culture. From their point of view, we’d be better off with no December holiday at all than one that is just a blue-tinseled version of Christmas. But I think they’re wrong, and not just because exchanging gifts is fun no matter what the excuse might be.

That’s because if the true message of Hanukkah can somehow be insinuated into our observances, it can be an efficacious antidote to the decline of a sense of belonging to the Jewish people and what Judaism means.

Contrary to the marketing pitches, Hanukkah is not a Jewish version of the same anodyne non-sectarian message of good will that has replaced the original religious content of Christmas. To the contrary, the Hanukkah story is about a conflict in which Jews had to fight to retain not just their independence against Syrian Greek invaders, but also their religious identity as a popular and all-consuming secular Hellenist culture threatened to overwhelm Judaism.

Though aspects of this history are repellent to those who see universal values as more important than parochial Jewish ones, Hanukkah is an inspiring tale of something that ought to be both popular and familiar to 21st-century Americans. The Maccabees were doing something liberal Americans are supposed to applaud: fighting to preserve their culture against the majoritarian impulse. Unless you think everyone has a right to their own identity, faith and homeland except Jews—which is the essence of an anti-Semitic BDS movement that targets Israel—Hanukkah is a good way to educate young Jews to think it’s okay to be Jewish and proud.

Above all, Hanukkah’s message is that refusing to bow down to the idols of popular culture in any era is the duty of every Jew. That’s not as warm and fuzzy as Santa Claus, but it ought to resonate with young people who tell us they want something more idealistic than materialism.

The lights we kindle on Hanukkah may commemorate a miracle that secular Jews may disdain as a fairy tale, but they are also a reminder that it takes the extraordinary efforts and faith of ordinary Jews to keep the flame of Jewish civilization alive. That’s something we should hope the growing numbers of American Jews of “no religion” would embrace.