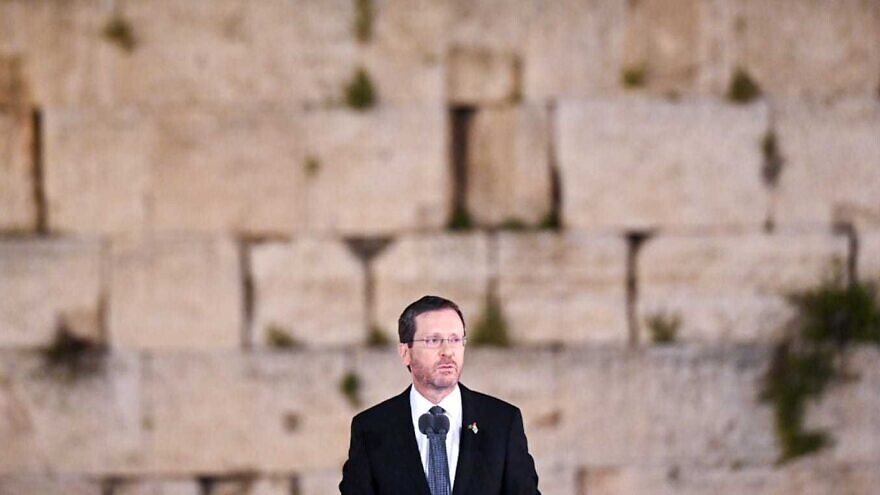 President Isaac Herzog at the Western Wall, speaking on the annual Remembrance Day for the Fallen of Israel's Wars and Victims of Terrorism, May 3, 2022. Photo by Kobi Gideon/GPO.
Spread the word.
Help JNS grow!
Share now:

(December 15, 2022 / JNS) Israeli President Isaac Herzog on Thursday slammed as a “blood libel” comparisons of the Jewish state’s policies towards the Palestinians to South African apartheid.

“The comparison between the State of Israel and the apartheid regime is not a legitimate criticism—it is a blood libel,” Herzog said in a video address to the World Zionist Organization’s annual conference in Tel Aviv.

“It is a dangerous and intensifying terrorism, since the legitimacy of the State of Israel and the justification of its existence is directly related to its ability to protect itself and hence they are trying to undermine this ability,” he added.

Herzog also described the BDS movement as a “brutal campaign” spearheaded by organizations “spreading lies and false facts and seeking to build a long-term policy that will undermine the existence of the state.”

He continued: “Let’s make no mistake, this is not a peace-seeking campaign, it is a campaign promoting hatred and incitement.”

For his part, WZO chairman Yaakov Hagoel warned of a resurgence in antisemitism, which he called a “malignant cancer” that required “major medical surgery to remove… at its roots.”