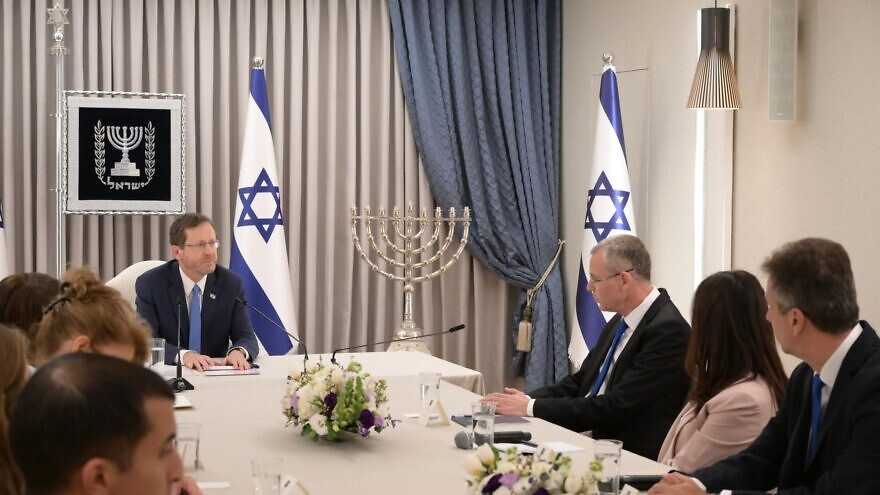 Representatives of Israel's Likud Party meet with President Isaac Herzog in Jerusalem and recommend that opposition leader Benjamin Netanyahu be tasked with forming a government in the aftermath of elections to the 25th Knesset, November 9, 2022. Credit: Amos Ben-Gershom/GPO.
Spread the word.
Help JNS grow!
Share now:

(November 9, 2022 / JNS) Israeli President Isaac Herzog on Thursday began a second day of consultations with representatives of the political parties voted into the 25th Knesset, ahead of tasking an individual—Benjamin Netanyahu, barring a force majeure—with forming a government based on their recommendations.

Herzog is scheduled to meet with representatives of United Torah Judaism, which won 7 seats in the Nov. 1 national elections, Religious Zionism (14), Yisrael Beiteinu (6), Otzmah Yehudit and Noam (which both ran on the Religious Zionism slate) and Ra’am (5).

The Israeli president will round out the process on Friday by meeting with members of Hadash-Ta’al (5) and the Labor Party (4).

The consultations are being broadcast live in accordance with Israel’s Basic Law: The Knesset, which grants the president one week (beginning Wednesday) to task a candidate with forming a coalition.

That candidate, which will almost certainly be Netanyahu, will then have four weeks, with the possibility of a 14-day extension, to earn the formal support of at least 61 parliamentarians to pass a confidence vote in the 120-seat Knesset.

If the candidate is unable to form a coalition within the allotted time, Herzog can either task another party head with doing so, or inform the Knesset Speaker that he sees no prospect for the formation of a coalition, in which case parliament would disband and the country would head to another round of elections within 90 days.

In the former case, the chosen candidate would have just 28 days to receive the formal backing of a majority of legislators (in Israel, a minority government is formed when a ruling coalition comprises fewer than 61 lawmakers but is backed in key votes by members of the opposition).

Should the second candidate also fail to secure the necessary support, a majority of Knesset members could, in turn, submit a joint formal written request to Herzog to task a specific lawmaker with forming a coalition within 21 days. If no such request is made, or if the third candidate is unable to form a coalition, the legislature will be dissolved and Israelis would head to the polls again, for the sixth time in just over four years.

However, after five elections in rapid succession beginning in April 2019, the Israeli public has given Netanyahu a resounding mandate to helm a stable, right-religious coalition.

Already Israel’s longest-serving premier, Netanyahu looks primed to return to the Prime Minister’s Office for an unprecedented third round of leadership, after holding the post from 1996-1999 and 2009-2021.

Schedule of consultations (subject to change):

11:00: Arrival of representatives of Religious Zionism.

12:00: Arrival of representatives of Yisrael Beiteinu.

16:30: Arrival of representatives of Otzma Yehudit.

17:15: Arrival of representatives of Noam.

10:00: Arrival of representatives of Hadash-Ta’al.

11:00: Arrival of representatives of Labor.