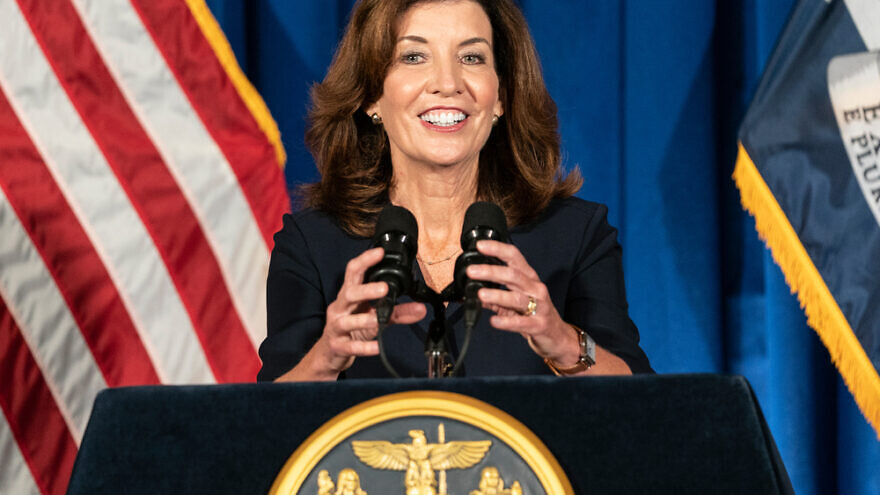 (November 8, 2022 / JNS) Democratic New York Governor Kathy Hochul comfortably defeated Jewish Republican challenger Rep. Lee Zeldin, garnering 55% of the vote as of 11:25 p.m., according to The Associated Press. She tweeted that she is “deeply honored to be elected Governor of the State of New York.” Her projected margin of victory defied polls that had anticipated a potential dramatic comeback by Zeldin in the days leading up to the election.

Hochul became governor in August 2021 after then-Gov. Andrew Cuomo resigned amid a scandal over sexual harassment allegations. Her year in office had been less eventful than that of Cuomo’s predecessors, but she and her party have become the figureheads of the rising crime plaguing New York City.

Zeldin aimed to take advantage of the perception that Hochul and New York Democrats were weak on crime and positioned himself as the law-and-order candidate. Despite his loss, the message especially resonated with the state’s many Orthodox and Haredi neighborhoods, where increased crime usually also means a dramatic rise in anti-Semitic assaults on visible Jews and their property.

Outside of Brooklyn’s Edward R. Murrow High School on Tuesday, a sign folded around a streetlight captured a headline from a Jewish community newspaper, reading, “GOV. HOCHUL TO YESHIVAS: NOT MY PROBLEM.

“The priorities are the life of our community, Jews in Brooklyn, in New York City, in the United States, but particularly Orthodox Jews in our community that have been attacked and been spit on. And I’m not just talking about physically. I’m talking about verbally by the highest levels of government, by the media,” New York City Councilman Kalman Yeger told JNS as he exited the voting booth. “And it’s time that people stand up, and that’s what you’re seeing in our community. People are standing up and they’re saying enough is enough. We’re not going to take it anymore.”

Yet the vast difference between the number of Democrats over Republicans in the state, as well as concerns over abortion rights, led to Hochul pulling through in the campaign.

Zeldin was assaulted during a campaign event in July and targeted with an anti-Semitic death threat in June.