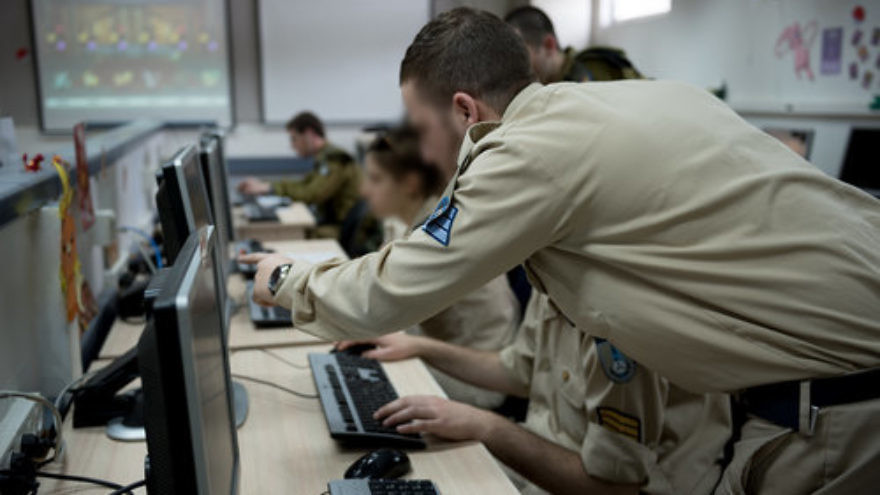 In the not too distant future, an Israel Defense Forces (IDF) battalion commander may stare out at the urban sprawl of a Gazan neighborhood. As he surveys the residential buildings, the locations of enemy gunmen hiding in apartments will be visible, marked in red by the augmented reality (AR) military glasses he’s wearing.

On the third floor of a building, he will see a hostile combatant crouching and pointing a shoulder-fired missile at him. On the fifth floor, he will know two snipers are lying in wait. Behind the building enemy mortar launchers hide, and the path leading to the structure is booby trapped with explosives.

The battalion commander will pass on the coordinates of these threats to Israel Air Force aircraft hovering overhead, which will promptly destroy the targets.

The commander may receive an incoming alert message on his eye wear; a terrorist cell is spotted moving in his direction from the Gazan coastline. With the push of a button on the screen of a tablet-like device, the commander could order an Israel Navy missile ship, waiting in the sea, tens of miles away to launch a precision strike on the target.

And then the commander will lead his soldiers forward.

This is a fictional scenario today, but it could become reality soon, thanks to the high-tech revolution of the IDF’s network-centered warfare (NCW).

The technology used in the above scenario will allow the IDF to adapt to 21st century Mideast warfare, where enemies appear and vanish in very little time, often in urban settings. This new environment is a far cry from the organized state militaries the IDF faced in the 20th century.

Maj. Assaf Ovadia, head of the IDF’s Combined Operations Department, confirmed to JNS.org that several technological breakthroughs have recently occurred, paving the path for the formation of a digital military network that significantly enhances the IDF’s capabilities.

“The world is changing very quickly, both in the civilian and military spheres. So are the threats we are dealing with,” Ovadia said. “Our ability to handle big data means we can bring information very rapidly to the end user in the field. We are adding new abilities all of the time.”

For now, this means that all three IDF branches; the army, navy and air force, are linked in a unified command and control network. A fourth member of the network is the IDF’s Military Intelligence Directorate, that allows critical information in real time to reach units conducting operations.

Learning from the past
Following important combat lessons learned from the 2006 Second Lebanon War, the IDF’s C4I Branch (which stands for Computers, Communications, Command and Control) set up the revolutionary Network IDF which allows all military branches to share the same data infrastructure.

In the past, each IDF branch had its own system for managing operations, which inefficiently and slowly transferred data to one another.

“Now, nothing is transferred because everyone is sitting on the same infrastructure. Each one is contributing to the common picture, in line with their missions,” Ovadia explained.

Network IDF began as a concept in 2014 and quickly began changing the way Israeli forces fight in battle.

Then, during the 2014 conflict with Hamas on July 8, a terrorist naval commando cell from Gaza swam north in the Mediterranean Sea and landed on Zikim beach on Israel’s southern coastline. What happened next represents “the first sparks” of the network, Ovadia said.

“An observations soldier saw suspicious activity on the beach. She transmitted data in real time to ground and air units. Then, a dialogue began between a tank commander and the air force. The units coordinated their firepower against the targets,” he recalled.

The network allows military platforms, like a helicopter and a tank, to communicate directly with one another, exchanging intelligence data, instead of relying on slow indirect channels. And it allows the military to identify and destroy a target in far less time.

At the same time, higher-level military officials use the network to interact with another, and stay up to date on battlefield developments.

Securing the data
The biggest challenge with the new system is securing the network against breach attempts, which could become a source of vulnerability for the IDF. Since its inception, the IDF has worked to secure the network so the data can be shared with end users in the field.

In 2015, Network IDF was declared fully operational, and today it continues to evolve.

For the network to be truly effective, Ovadia said, it’s necessary to refine data until it turns into useful knowledge. Big data analytics play a role in this.

And the intelligence must be sent only to those who would directly benefit from it.

“We don’t want a company commander to receive all of what Military Intelligence has. Similarly, a tank commander is only interested in the ten kilometers in front of him. They will receive alerts, in real time, that are relevant to their sectors,” he said. “Then, they can respond appropriately.”

In today’s IDF, every ‘end user,’ whether a tank commander, or a senior officer in the general staff, has access to a command and control system, which includes a screen. Future plans include making these capabilities more automatic. And augmented reality is already being used in training.

“We are dealing with augmented reality a lot. We are on the way to it,” Ovadia said. “In the future, we won’t want an observations soldier to merely say what she sees. We want the commander in the field to see what she sees.”