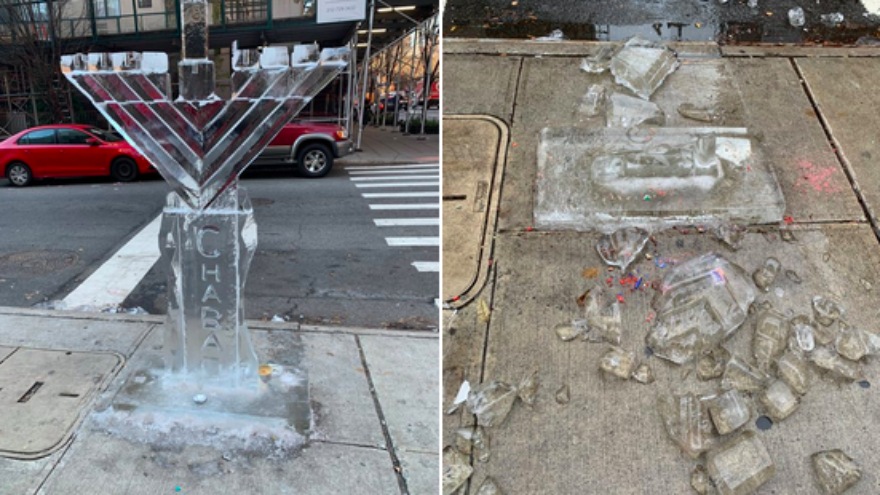 The ice-carved menorah commissioned by Upper East Side (UES) Chabad Israel Center, before and after it was smashed. Credit: Twitter.
Spread the word.
Help JNS grow!
Share now:

(December 23, 2022 / JNS) The ice-carved menorah commissioned by Upper East Side (UES) Chabad Israel Center was smashed in an apparent antisemitic attack on Wednesday night. This incident follows a previous act of vandalism that took place at the same center in October during the Sukkot holiday.

“This was definitely a malicious and intentional act,” said Rabbi Uriel Vigler, who heads the Chabad Israel Center on the UES, in a statement to the @Jews_of_NY Instagram page. “The ice was smashed from both sides. Also on Sukkot we faced this kind [of] hate when our sukkah was vandalized.”

Prior to this incident, the center’s sukkah was vandalized overnight on a Saturday just before the start of Sukkot. Video footage showed a person urinating on the sukkah before kicking it in. The vandalism ended when an unidentified heroic New Yorker intervened.

“On Hanukkah Jews light the menorah purposely at night time in order to spread light, because just a bit of light dispels the darkness,” the rabbi’s statement continued, in reference to the symbolism behind the ongoing Jewish holiday.

“The darkest place right now is in the heart and soul of some individuals who perpetrate antisemitism and harm individuals who I represent, with words, physical actions, with assaults, with messages on social media,” Hochul said at the event, adding that she views such actions as an attack on her and all New Yorkers.

Vigler concluded by saying that “the forces of hatred will never be victorious,” and that the Chabad center would still light the menorah “and pray that light will win over darkness like it always has for the Jewish people.”