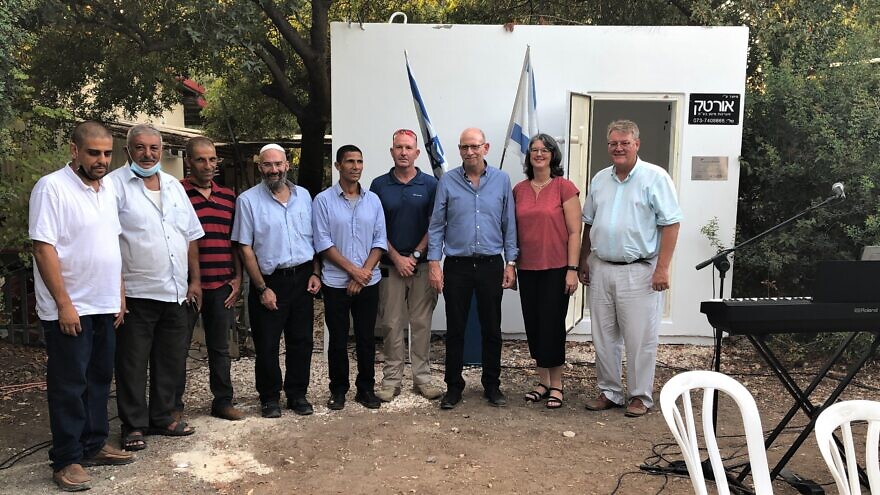 (December 1, 2021 / JNS) The International Christian Embassy Jerusalem is in the process of delivering 36 new portable bomb shelters to Israeli border communities that are especially vulnerable to rocket and mortar fire from Gaza and Lebanon. The funds have been raised from Christians worldwide in the past six months since Israel’s latest conflict with terrorist factions in the Gaza Strip.

With this development, the ICEJ has now donated a total of 161 portable bomb shelters to Israeli communities under rocket threat since 2008 with the majority (130) placed in towns along the Gaza periphery in the south and the remaining ones deployed in the north.

In the past decade, the western Negev region has received most of the attention from government and private sources seeking to better protect the local civilian population from frequent rocket barrages. Working in partnership with “Operation Lifeshield,” the Christian Embassy has placed dozens of mobile bomb shelters in communities in the Gaza envelope, stretching from Kerem Shalom in the south all the way up through Sderot and Ashkelon.

Most have been donated to schools, day-care centers, medical clinics, youth centers, community halls, university campuses, factories and other public places that cannot operate during times of crisis without adequate bomb shelters. 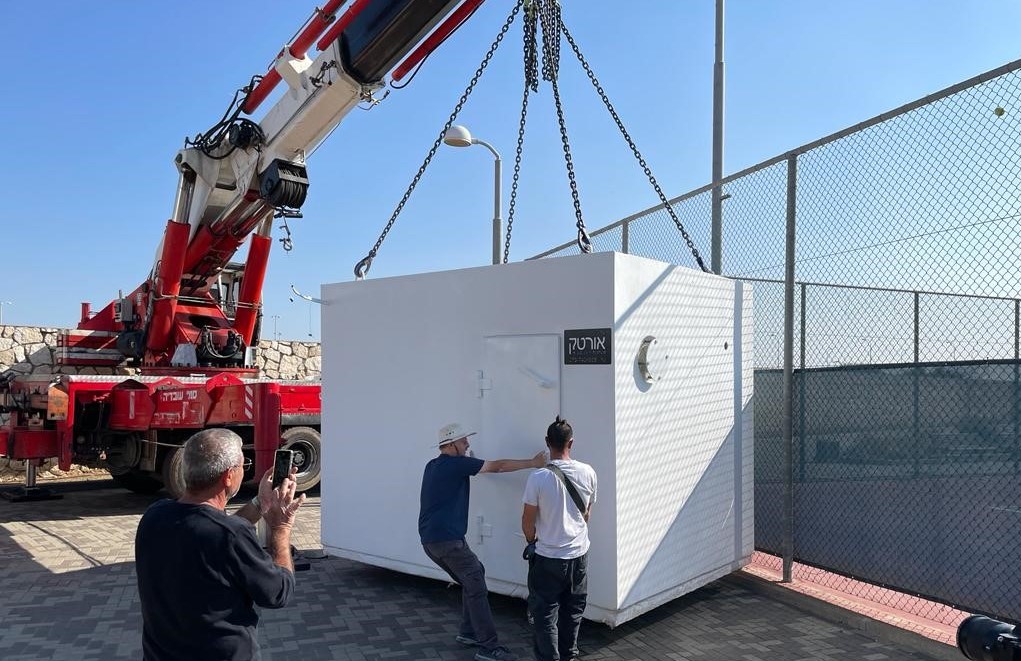 A new bomb shelter is put into place at the Akko-Israel Tennis Center in Israel. Credit: Christian Embassy Jerusalem/Operation Lifeshield.

Yet the need for more bomb shelters in the north has become more apparent due to their sporadic existence, coupled with Lebanon’s growing economic crisis and domestic instability.

A State Comptroller report issued last year warned that 2.6 million residents of northern Israel do not have access to functional bomb shelters. While efforts have been made to upgrade existing shelters, the state budget has provided little funding to add new and better ones, due in part to the nature of Israel’s government in recent years and the priority given to resupplying the IDF’s Iron Dome batteries, the report concluded.

‘Give their families peace of mind’

To that end, the Christian Embassy is delivering some of its 36 new shelters to public places in Haifa, Akko, Kfar Maccabi and elsewhere in consultation with local authorities, security chiefs and social agencies. Two new bomb shelters were delivered and dedicated on Nov. 23 at the Israel Tennis Center facilities in Akko, which teaches tennis and other sports to Jewish and Arab youths from disadvantaged families.

Since the 11-day conflict in May with Hamas and Palestinian Islamic Jihad based in Gaza, the ICEJ has received donations for new bomb shelters from Christians in dozens of countries, most notably from Brazil, Canada, China, the Czech Republic, Fiji, Germany, Ireland, the Netherlands, South Africa, Switzerland, the United Kingdom and the United States.

“Many Israelis living along the Gaza border have told us that these mobile bomb shelters indeed save lives and give their families the peace of mind they need to continue their daily lives under the constant threat of rocket attacks,” said Dr. Jürgen Bühler,  president of ICEJ. “We now want to focus more on the need for additional bomb shelters to protect civilians in the north. The existing public shelters are not enough, and these portable shelters are an effective way to provide greater security to the smaller towns and villages in the Galilee and Haifa regions that are often overlooked.” 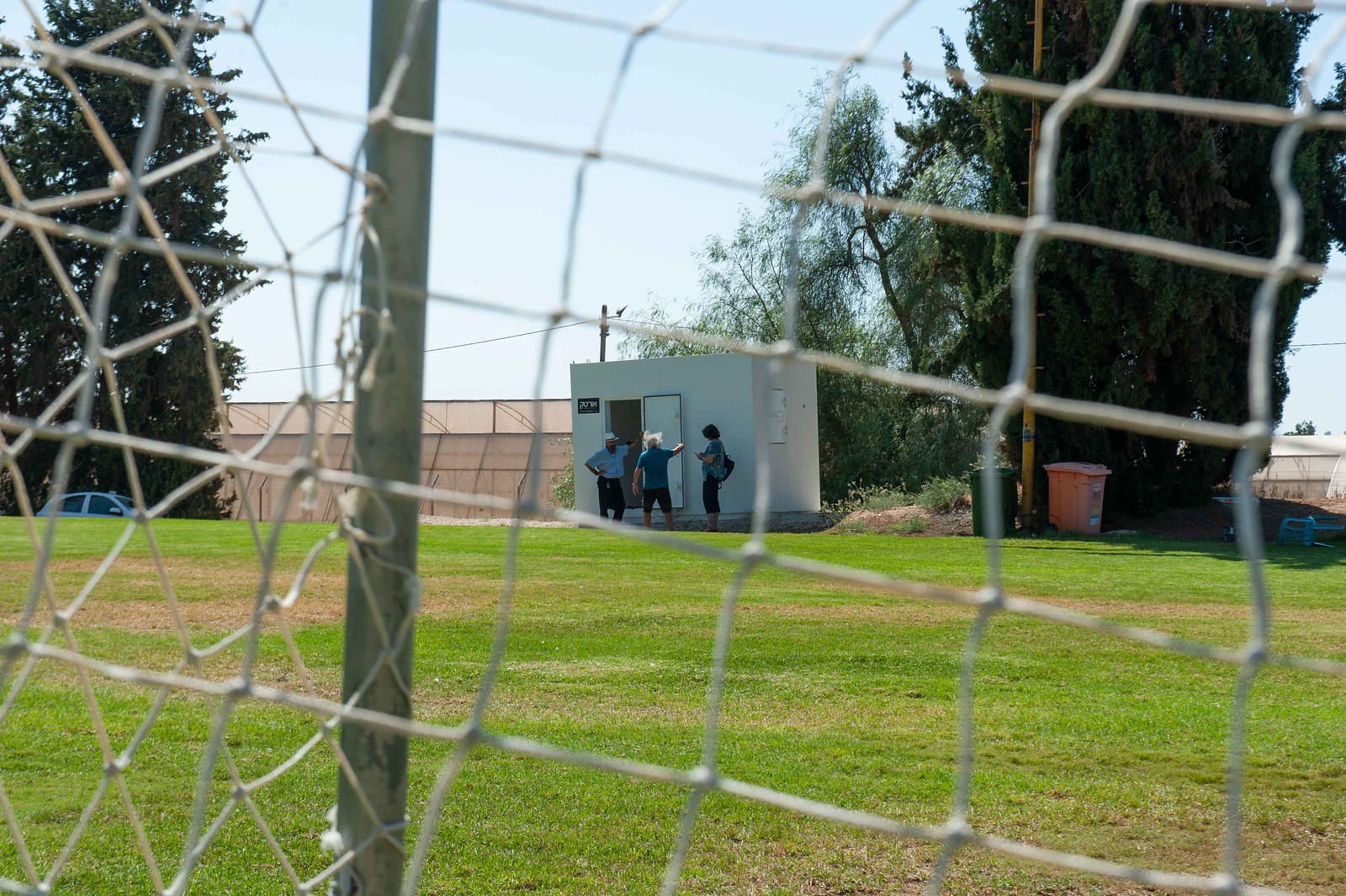 A new bomb shelter was placed on a soccer field at Kibbutz Bror Hayil in southern Israel. Credit: Christian Embassy Jerusalem/Operation Lifeshield.
Republish this article in your newspaper or website