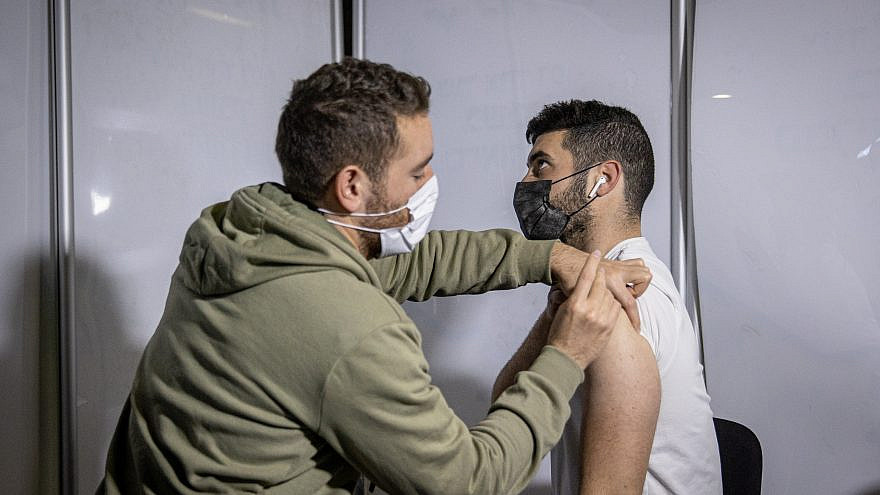 (March 11, 2021 / JNS) The Israel Defense Forces announced on Thursday the completion of its coronavirus vaccination program, becoming the first military in the world to inoculate nearly every one of its service members.

All service members received the Pfizer-BioNTech vaccine with 81 percent of personnel fully vaccinated by Thursday and 85 percent in the coming days.

The development enables many operational units to now return to near-normal functioning, in line with what the General Staff defined as a “green unit”—meaning that at least 90 percent of its members are vaccinated.

IDF Chief Medical Officer, Brig. Gen. Professor Alon Glazberg stated, “We are proud to be the first military in the world to be vaccinated.”

Speaking to journalists, he added that the IDF vaccine program took the form of a “10-week dash,” describing it as an “enormous effort to vaccinate service members from all branches—the air force, army and navy across the country.”

Glazberg said extensive logistical efforts were needed to move the vaccine in its deep-frozen temperatures, adding, “We did not waste a single vial.”

The IDF Medical Corps personnel worked “day and night” to implement the program, he added, while at the same time continuing to back up the civilian health system, such as running hospital departments and providing specialized medical care.

Meanwhile, within the IDF, logistics units teamed up with line officers and the Health Ministry to get the vaccines to service members.

Head of the IDF Logistics Division, Brig. Gen. Pini Ben Moyal said that 22 facilities had been set up around the country enabling units to arrive and receive their vaccine doses.

“We thought about maintaining the vaccines in the right temperatures, delivering them as fast as we can, and managing and coordinating the vaccinations in the facilities,” he said. In the next stage, large numbers of soldiers were transported from bases to the vaccination centers.

“The third level was the digital level. [It involved figuring out] how can we control and command every soldier that comes into the [vaccination] compound, register them, and then how do we know the vaccine the soldier got is OK and ensure the soldier gets the second dose,” explained Moyal. A unique application was created to track the vaccine progress of each soldier.

The defining feature of the operation, he said, was “modesty—and learning day by day. Before we got to this operation, we only had a two-week alert that the vaccines were coming to the IDF.”

A command center was set up in Tel Aviv that placed all decision-makers in the vaccination program in a single location, and the progress of the vaccines was monitored on a daily basis together with regional commanders of the air force, navy and intelligence units.

“The main thing was doing things step by step and learning on the way,” said Moyal.

As of this month, no IDF member had died from the virus, and a single service member suffered a severe case. As of March 11, 370 IDF soldiers have been confirmed as being infected.