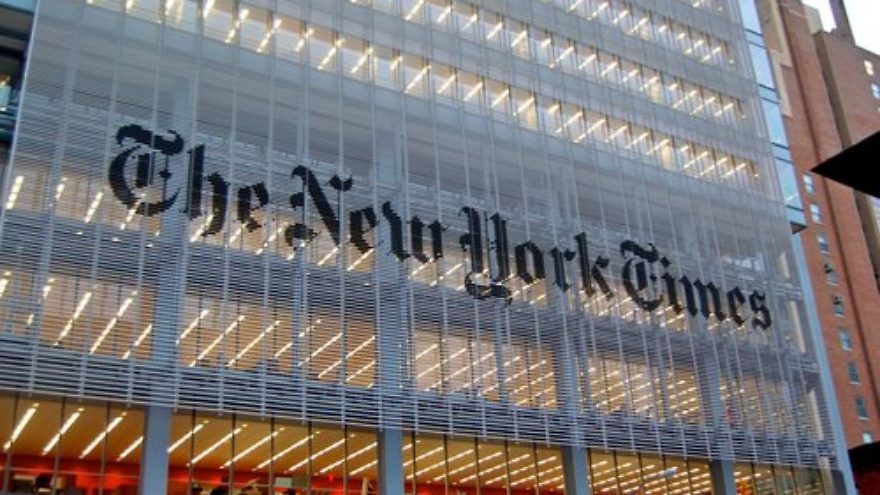 (August 10, 2018 / CAMERA) Following a well-worn pattern, The New York Times is again downplaying Palestinian belligerence, this time obscuring the fact that intensive Palestinian rocket attacks against southern Israel prompted a wave of Israeli airstrikes on Hamas site in the Gaza Strip in the last 24 hours.

Today’s article by Isabel Kershner (“Renewed Clashes Between Israel and Gaza Interrupt Talk of Cease-Fire“) fails to report the chronology of events, and erased cause and effect, by telling readers in its opening paragraph that Israel and Hamas spent the night “trading” attacks, as if discussing a simultaneous transaction: “Talk of a long-term cease-fire between Israel and the Hamas rulers of Gaza was abruptly interrupted by cross-border fire late Wednesday and early Thursday as the Israeli military traded blows with Palestinian militants, the latest in a series of recent sharp clashes.”

The second paragraph continues with the obfuscation, reducing the long night of Palestinian attacks that sent Israeli civilians to bomb shelters throughout the night, and Israel’s eventual response, as an “exchange.” The headline also is flawed by a murky portrayal of events: “Clashes Between Israel and Gaza.” 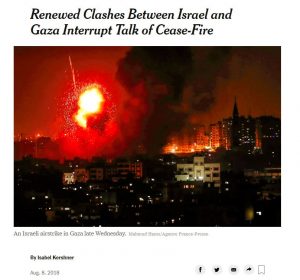 The third and fourth paragraphs detail the Palestinian rocket attacks and the Israeli air strikes, respectively, but still do not indicate that the latter were in response to the former. On the micro level, Kershner notes that military said that one specific strike “hit a vehicle that it said was carrying a squad that had just launched a rocket at Israeli territory.” Nevertheless, there is no indication that Israel’s “waves of attacks against targets across Gaza” was in response to the scores of Palestinian rocket attacks targeting Israeli civilians.

Strikingly, the word “respond,” or any variation thereof, appears only in context of Hamas responding to Israeli strikes: “Hamas, the Islamic militant group that has ruled Gaza for 11 years, has been trying to change the balance of deterrence in the area, responding to every Israeli strike against Gaza.”

In addition, about the incident Tuesday in which Israel fired on a Hamas post after it thought its troops on the border were targeted, Kershner again twice referred to Hamas responding. She wrote that “Hamas vowed to respond,” and that later in the day “Hamas responded with rocket fire.”

The Los Angeles Times, for its part, clearly stated in the very first sentence of its storythe cause and effect of Palestinian rocket fire and subsequent Israeli airstrikes: “Hamas, the militant group that controls the Gaza Strip, fired at least 70 rockets Wednesday across the border into Israel, which retaliated with airstrikes on the Palestinian territory.” The LA Times’ print headline also clearly laid out the chain of events: “Hamas fires 70 rockets at Israel; Nation retaliates with airstrikes in Gaza, and 200,000 civilians are ordered to shelters.”

And while The Washington Post‘s opening sentence recounts the events in reverse chronological order it does explicitly state that the Israeli strikes were in response to the Palestinian rockets: “Israel struck more than 150 targets in Gaza in response to a barrage of rockets from the Palestinian territory, its military said Thursday, in a significant escalation even as negotiations took place on a longer term cease-fire” (Emphasis added).

Separately, The Times grossly misrepresents Hamas’ ongoing rocket attacks against the Gaza envelope communities with the following claim: “Palestinian fire was mostly calibrated to hit border areas rather than population centers.” In the last several weeks of rocket fire, Hamas did not calibrate its fire to hit only unpopulated areas, as readers are likely to understand from this passage.

While Hamas has until a little while ago avoided attacks on larger cities further from the Gaza border, such as Beersheva and Ashkelon, it freely targeted Sderot and other border communities. Some rockets landed in the communities, and many others were shot down by the Iron Dome, which is designed to intercept only rockets headed towards population centers.