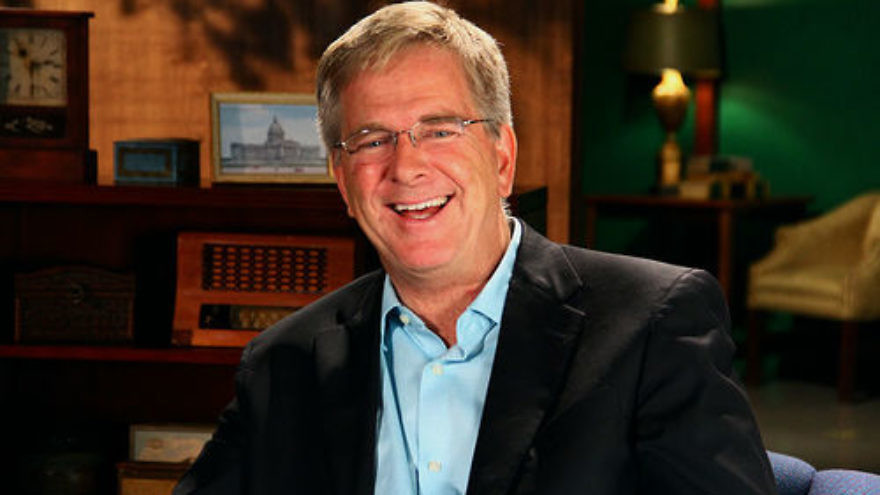 Television travel show host Rick Steves has embraced a new cause—to promote empathy and tourism for what he calls “Palestine.”

In support of his mission, Steves has produced a documentary about the conflict between Israel and the Palestinian Arabs, called “The Holy Land, Israelis and Palestinians Today,” anticipated for release in September 2014. Concerns about Steves’s understanding of the conflict were raised after the Committee for Accuracy in Middle East Reporting in America (CAMERA) identified serious errors and omissions in a two-hour lecture about Israel and the Palestinian Arabs that he posted on YouTube in November 2013. More disturbingly, it was learned that Steves had praised an anti-Israel propaganda film for revealing “truths” about the conflict.

Steves’s immersion in the Israeli-Palestinian conflict is part of a trend among popular “infotainment” figures to take on more serious topics. This trend manifested itself in the past year with two popular infotainers, Steves and television chef Anthony Bourdain, expounding on the Israeli-Palestinian conflict. Each expressed a desire to stay above the fray by promoting empathy for both sides. But as it turned out, both were taken in by the well-rehearsed Palestinian narrative of victimization, at the cost of factual accuracy.

In September 2013, Anthony Bourdain, host of the CNN series “Parts Unknown,” presented a segment on Israel and the West Bank. Bourdain acknowledged that he knew little about the conflict. “Here goes nothing,” he joked. His frolicsome style was ill-suited for such a serious topic, and his show was soon hijacked by Palestinian activists offering unsubstantiated anecdotes alleging unlawful Israeli actions.

Steves approached the topic with more intensity. Yet he seems to have relied on unscholarly propagandistic sources to inform his perspective. After viewing the film “Peace, Propaganda and the Promised Land,” he wrote on his blog in April 2012 that he realized how he had been “duped” and “bamboozled” by Israel’s supporters. The film that supposedly transformed him features a line-up of anti-Israel agitators who deceptively allege that the media promotes a distorted pro-Israel message. The film depicts Zionism—the national liberation movement of the Jewish people—as a racist ideology akin to that which governed apartheid South Africa. The film portrays the Palestinian Arabs as hapless victims. Missing is any substantive discussion of the Palestinian rejection of any solution that would require them to acknowledge the right of the Jewish state to exist and live in peace within secure borders.

Steves’s susceptibility to such agitprop suggests that he possesses little knowledge of the Arab conflict with the Jews and was easily gulled into accepting the “Palestinian narrative” with its appropriation of human rights rhetoric and revisionist history. The influence of “Peace, Propaganda and the Promised Land” on Steves is evident in his two-hour lecture. He devoted considerable effort to illuminating Israeli and Palestinian experiences, yet he lacks insight. Like Bourdain, he parrots the well-rehearsed message fed to him by Palestinian interlocutors. The failure to do adequate fact-checking mars his account with fundamental factual errors.

Repeatedly, he displays a series of maps depicting the expansion of Jewish settlement in the British Mandatory Palestine at the expense of the Arabs. The maps falsely show all of the land not possessed by Jews at any time as Arab land. In fact, the bulk of Israel and the West Bank were never Arab land. For centuries, the Ottoman Turks held the territory as state land. This status transferred to the League of Nations’ Palestine Mandate after World War I and in 1948 to Israel—except for the portion illegally seized by Jordan, which labeled it the West Bank in place of Judea and Samaria. The maps’ false rendition of history creates the illusion that Jewish settlement supplanted an already existing nation called Palestine.

Steves also is silent on the fact that today’s Jordan was created by Britain in the 1920s on more than three-quarters of mandatory lands, and that it includes a Palestinian Arab majority. He gets more basic history wrong, asserting that after the slaughter of six million Jews in the Holocaust, “the whole world is interested in finding some kind of justice, some kind of future for Jewish civilization.”

In reality, despite the revelations of the Holocaust, Jewish resettlement in Palestine was vigorously opposed. The British blocked the flight of Jewish refugees to Palestine during and after the war and interned thousands of them in camps on Cyprus. And to this day, demonizing rhetoric against Jews and calls to destroy Israel in many Muslim countries underscores that the “whole world” is still not reconciled to a secure future for Jewish civilization.

Steves depicts former Palestine Liberation Organization leader Yasser Arafat as genuinely interested in peace, but “undercut by people on his extreme right that thought he was too moderate.” In fact, Arafat’s duplicity was exposed repeatedly, and he lost credibility as a peace partner. To a group of Arab diplomats in Stockholm in 1996, three years after the signing of the Oslo Accords, Arafat said:

“…We plan to eliminate the State of Israel and establish a purely Palestinian State. We will make life unbearable for Jews by psychological warfare and population explosion; Jews will not want to live among us Arabs. I have no use for Jews; they are and remain Jews.”

Steves contends that only “extreme Zionists” describe the West Bank as Judea and Samaria. In fact, these are the official designations used by the Israeli government and in official British documents during the Mandate period. Even noted Palestinian scholar Walid Khalidi endorsed this terminology. Steves seems unaware that the term West Bank only came into popular usage during the Jordanian occupation from 1948-1967. His handling of Hebron also underscores his bias. He mentions the massacre of 40—in reality, 29—Muslim worshippers by Baruch Goldstein in 1994, but does not mention the destruction of Hebron’s Jewish population in 1929. Of the Jewish settlers in Hebron, he sneers, “I couldn’t even begin to talk with them,” yet he is sympathetic to a Palestinian boy who insults him.

Steves repeatedly invokes the canard that one man’s terrorist is another man’s freedom fighter. This excusal of terrorism seems to be an attempt to equalize the claims of the two parties—when in fact only one side is sending suicide bombers into cafes and family gatherings to target and murder the other side’s civilians. His failure to deal with the culture that spawns and celebrates terrorism is underscored by his failure to address the incitement to hate Jews recited in Palestinian media, government, religious institutions, and schools. Murderers of Jews are held up as icons to be emulated. City squares, schools, even girl-scout troops honor the perpetrators of horrific massacres of civilians. There is no equivalent to this pathology in Israeli society.

Despite the appearance of a serious effort to explore the conflict, Steves demonstrates laxity toward his responsibility to ensure a factually accurate account. In an article in Salon magazine (March 20, 2009) dealing with his endorsement of travel to Iran, in response to a question about Iran’s threatening activities, Steves glibly states, “Maybe they do fund terrorism, maybe they do want to destroy Israel, maybe they do stone adulterers. I don’t know. I just wanted to humanize the country and understand what makes its people tick.”

“Humanizing” a country in the grip of a dictatorship, the world’s leading state sponsor of terrorism, is to make a willing dupe of oneself. Similarly, if Steves is going to stake his reputation on a documentary on Israel and the Palestinians that reaches potentially millions of viewers, shouldn’t he care enough to investigate the facts? Aren’t the stations supported by the Corporation for Public Broadcasting that he hopes will broadcast his program obligated by the Telecommunications Act to meet basic journalistic standards of accuracy, objectivity, context, and balance? Stay tuned.

Steven Stotsky is senior research analyst for the 65,000-member, Boston-based Committee for Accuracy in Middle East Reporting in America (CAMERA). Any opinions expressed above are solely his own.