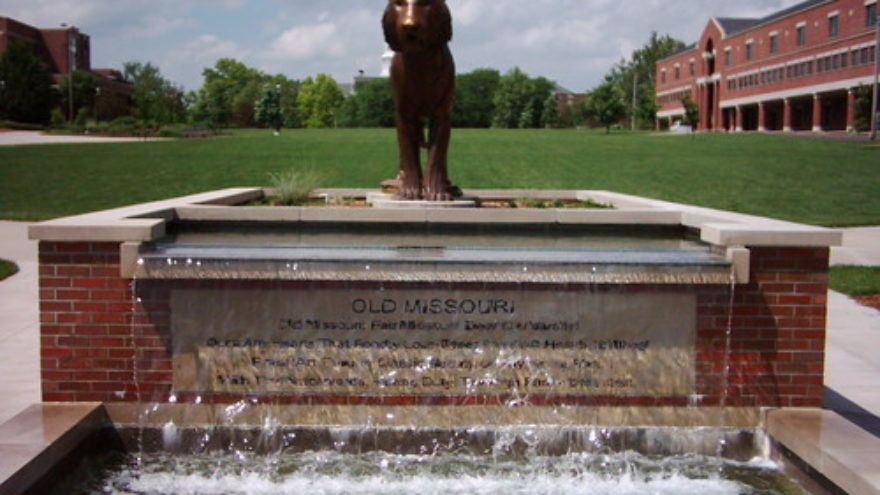 The fountain and statue that make up "Tiger Plaza" on the University of Missouri campus in Columbia, Mo. Credit: Yassie via Wikimedia Commons.
Republish this article
1374 WORDS
Spread the word.
Help JNS grow!
Share now:

(June 11, 2015 / JNS) A University of Missouri (MU) fall 2015 honors tutorial that pro-Israel students felt would promote bigotry and misinformation on their college campus has been cancelled. “Perspectives on Zionism,” which was scheduled to be taught by self-proclaimed “post-Zionist” and “Nakba Jew-in-law” George Smith, was nixed due to no enrollment, according to a June 10 announcement.

Yet the catalyst behind the cancelled course—Smith, a tenured biology professor who pushed for a curriculum that the instructor himself said would have included works by anti-Zionist authors such as Ilan Pappé, who has accused Israel of ethnic cleansing—is very much active.

The pro-Israel community welcomed the news of the course’s cancellation.

“I can now walk away with the knowledge that there is no interest among students [at MU] to take biased classes like Smith’s,” said Destiny G. Albritton, former president of MU’s Christians United for Israel (CUFI) campus chapter.

“We salute the MU administration for upholding academic standards and being a model other schools can emulate,” Roz Rothstein, CEO of the Israel education organization StandWithUs, said.

Chantelle Moghadam, co-founder and president of Students Supporting Israel at MU, said, “We were very happy to hear that the administration finally made the right decision, and that unbiased education has triumphed over this professor’s political views.”

Smith has written dozens of columns and letters to the editor in the local and campus newspapers in Columbia, Mo., equating Israel’s Independence Day with a Palestinian version of Holocaust Remembrance Day. He uses phrases such as “Zionist mythology” and accuses Israel of “colonization of the Occupied Palestinian Territories.” He shows up at pro-Israel events and heckles the speakers. Earlier this year, when 25-year-old Israel Defense Forces reservist Hen Mazzig spoke at MU as part of the StandWithUs Israeli Soldiers Tour of the Midwest, Smith heckled him from the audience with hostile questions and accusations.

“[He said], ‘Why do you kill Palestinians? How many U.N. schools have you attacked?” Mazzig told the Chicago Tribune. “And at the end, he came to me and said, ‘How can you come here and defend Ashkenazi Jews—white Eastern European Jews—when you are an Arab Jew?’”

MU alum Daniel Swindell said Smith brought flyers to a talk by the Sderot Media Center’s Noam Bedein that made a joke out of the thousands of rockets that have been launched at Israel. Area spiritual leader Rabbi Yossi Feintuch said Smith showed up to a speech by an American Israel Public Affairs Committee (AIPAC) representative at his synagogue and proceeded to harass the speaker, advocating that Iran should achieve nuclear independence. CUFI’s Albritton noted that Smith has attended organizational meetings and interrupted, using “intimidation tactics” to get his point across.

Smith has used his tenure—he has worked at MU for 30 years—to bring in anti-Israel speakers with university funding. Recently, six university departments sponsored a talk by author Saree Makdisi, who has said it is more important to eliminate the Jewish state than to create a Palestinian one.

“He uses his reputation to get several departmental sponsors,” Albritton told JNS.org. “But when Students Supporting Israel or CUFI asks these same departments to co-sponsor events, we either don’t hear back or we hear, ‘we cannot help you.’ It’s not fair.”

“I do go to pro-Zionist meetings, but I don’t disrupt. I am just vocal with my questions,” he told JNS.org. “People have freedom of speech. Our university does not sensor our political speech—or any other kind of speech.”

When one reads about MU in the media, it’s usually about the black-and-gold Tigers football team, the stellar reputation of the school’s journalism school, or as a stopping point and party hub situated between the cities of St. Louis and Kansas City.

“The University of Missouri is not a hot bed of anti-Semitism or BDS (the Boycott, Divestment and Sanctions movement),” Karen Aroesty, Missouri/Southern Illinois regional director of the Anti-Defamation League, told JNS.org. Until recently, the impact Smith had on campus was, in Aroesty’s words, “minimal.”

The honors tutorial, however, created tension.

“When I saw the roster of what honors tutorial would be offered in the fall and I saw that George wanted to teach this class, I immediately spread the word around,” said Albritton. “George [Smith] is not qualified to teach the class. His background is in biology. He has no background in international relations. His only interest in Zionism is that he has been a virulent anti-Zionist activist.”

Sixteen local, national, and international organizations wrote a letter to MU Chancellor R. Bowen Loftin urging him to cancel the class before it became “a stain on your university’s reputation and a disservice to students. … Smith’s proposed course would certainly contribute to a campus climate favorable to anti-Semitic acts.”

Students feared that if Smith has few qualms about using intimidation in group meetings, he would be equally as uninhibited in the classroom. The university, however, did not share those same sentiments.

Nancy West, director of MU’s Honors College, told JNS.org that honors tutorials are different than courses offered under the normal curriculum of the university. They are one-credit electives taught by instructors with “expertise in the subject area,” but not necessarily with credentials. Courses are reviewed by a faculty, staff, and student curriculum committee that reads the syllabus and interviews the teacher. According to university spokeswoman Mary Jo Banken, Smith’s class was approved by the committee with a vote of eight to four, with two abstentions.

Smith recalled that he was confronted by the committee as to whether being an activist disqualified him from teaching this course.

“Can an activist teach a class? It runs against the fundamental principles of academic honesty for a teacher to use his position of power to push a particular point of view. What I claimed—and who knows if I really could have lived up to this—was that if a student comes into this course convinced and committed to Zionism then that student will leave a better Zionist,” he said.

“Smith has a 30-year record of being an outstanding teacher who is very well respected,” said West. “We trusted that record and trusted him. … I stand behind George’s course.”

Nonetheless, it is unlikely that the course will ever be offered again in the future. While West said it is not uncommon for tutorials to be cancelled due to low enrollments—and Smith’s was not the only one this year—an affidavit is being prepared by Jewish community activists, in conjunction with the university legal department, that would help ensure Smith will be turned down next time he tries to teach about Zionism.

A source, who spoke on condition of anonymity because her testimony is tantamount to the affidavit, said four students that don’t feel safe with Smith leading anything on this topic have provided evidence. She has provided a series of harassing anti-Israel emails from Smith that will back up this case.

West said the university also agreed to change its policies as a result of some of the backlash. Going forward, all honors tutorials will be subject to anonymous student review after the first three weeks of the semester.

“If George’s course had gone through, we would have sent something to his students within the third week and, if there had been an issue, we would have addressed it right away,” West said.

The students are relieved they did not have to get to that point, and adult activists say they are proud of their students for pushing for change.

“Administrations sometimes try to bully our students and it is refreshing to see students stand up in the face of administrations, especially in a case like this,” said David Walker, who directs nationwide campus outreach efforts for CUFI.

Albritton graduated last month. She told JNS.org that she has left MU’s CUFI chapter “in good hands,” and that she is confident a strong hand against Smith’s anti-Israel bias will continue to be needed on campus.

Noted community activist Michael Robbins of Columbia said, “We cannot just be satisfied because George Smith had zero registration. Israel needs all the positive reinforcement it can get.”