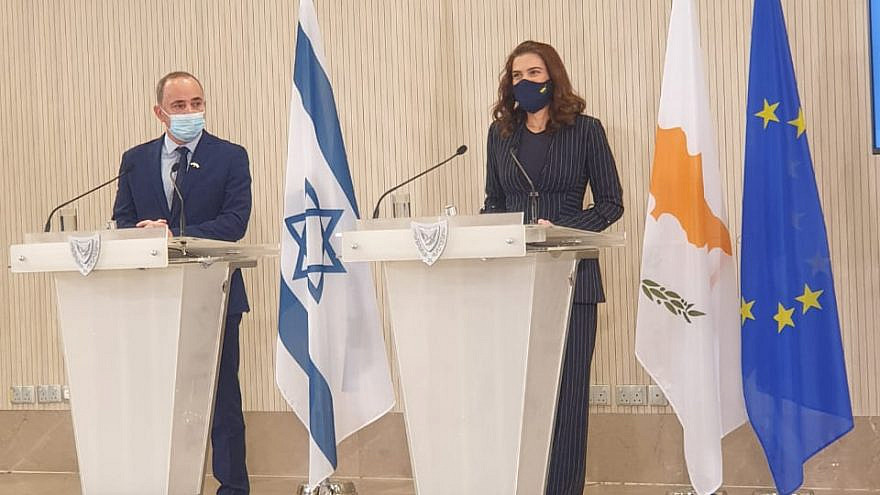 Israeli Energy Minister Yuval Steinitz and Cypriot Energy Minister Natasa Pilides at the signing of a Memorandum of Understanding (MoU) in Nicosia, Cyprus, regarding the construction of an undersea power cable connecting the two countries' power grids, as well as that of Greece, March 8, 2021. Source: Twitter.
Spread the word.
Help JNS grow!
Share now:

(March 9, 2021 / JNS) Israel, Cyprus and Greece signed a Memorandum of Understanding (MoU) on Monday regarding a project to link their power grids via the construction of the world’s longest and deepest undersea power cable.

Steinitz called the MoU “great news for the citizens of Israel,” according to a ministry statement.

“The Euro-Asia Interconnector underwater power cable will allow us to receive electricity backing from the power grids of the European continent in times of emergency, and more importantly will also support our ability to significantly increase reliance on solar power generation, and help us meet the government’s 2030 solar-energy targets,” he said.

Cypriot Energy Minister Natasa Pilides said that the MoU marked “a decisive step towards ending the island’s energy isolation and, consequently, our dependence on heavy fuels.”

Once completed, the undersea power cable will be the longest and deepest in the world, according to the ministry. The cable, which will be laid at a maximum depth of 2,700 meters (nearly 9,000 feet), will have a capacity of 1,000 to 2,000 megawatts.

According to the ministry, the project is expected to cost a bit more than $9 billion, part of which is to be provided by the European Union, which has recognized the undertaking as a Project of Common Interest.