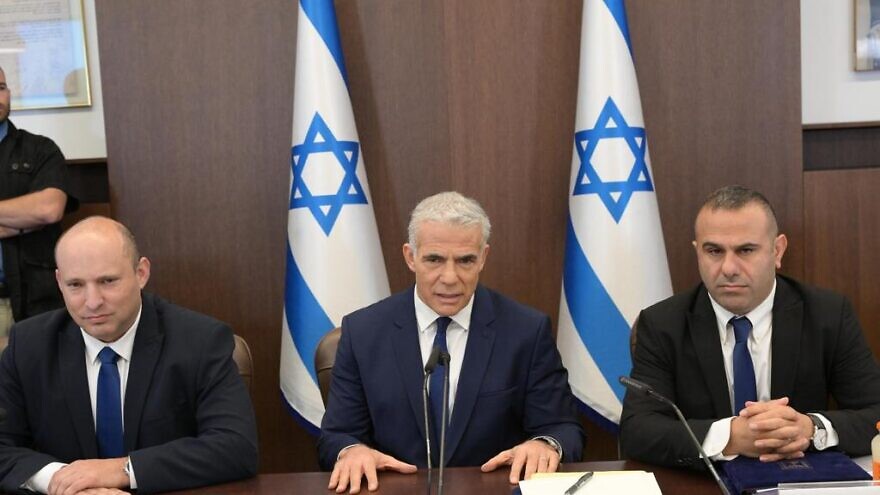 (October 27, 2022 / JNS) Israel’s Cabinet on Thursday approved the U.S.-mediated maritime border and natural gas agreement with Lebanon, paving the way for Israeli Prime Minister Yair Lapid to sign the accord, according to a statement from his office.

“This is a tremendous achievement for the State of Israel and for the government of Israel,” said Lapid at the beginning of the special Cabinet meeting. “This agreement strengthens Israel’s security and our freedom of action against Hezbollah and the threats to our north,” he said, adding that “everyone has signed off on this agreement and its contribution to Israel’s security and our operational needs.”

Lapid also suggested that by agreeing to the deal, Lebanon, an “enemy country,” was effectively recognizing Israel, and noted that the United States was providing Jerusalem with security and economic guarantees.

A signing ceremony is scheduled to take place at 3 p.m. at the United Nations base in Naqoura, located along the Israel-Lebanon border, which will be attended by members of the Israeli, Lebanese and U.S. negotiating teams.

The deal draws a border between the two countries’ exclusive economic zones (EEZs) based on a boundary known as Line 23, and awards a disputed area of around 840 square kilometers (324 square miles) to Lebanon, while recognizing Israel’s claim to the Karish gas field and to royalties from the section of the Qana field that extends into the Jewish state’s EEZ.

During a Wednesday meeting at the White House with Israeli President Isaac Herzog, U.S. President Joe Biden said that it took “guts” for Jerusalem to forge the accord, while reinforcing Washington’s “ironclad” commitment to the Jewish state’s security.

His comments came just hours after the British-Greek company Energean plc announced that it had begun extracting natural gas from the Karish platform off the northern Israeli coast.

Israel recently set up a rig at Karish, where the flow of gas was delayed in order to give the talks more time, and amid repeated threats of war by Hezbollah chief Hassan Nasrallah.

On Thursday evening, Lapid is slated to meet with American mediator Amos Hochstein, who spearheaded the indirect negotiations between Jerusalem and Beirut for more than a year.