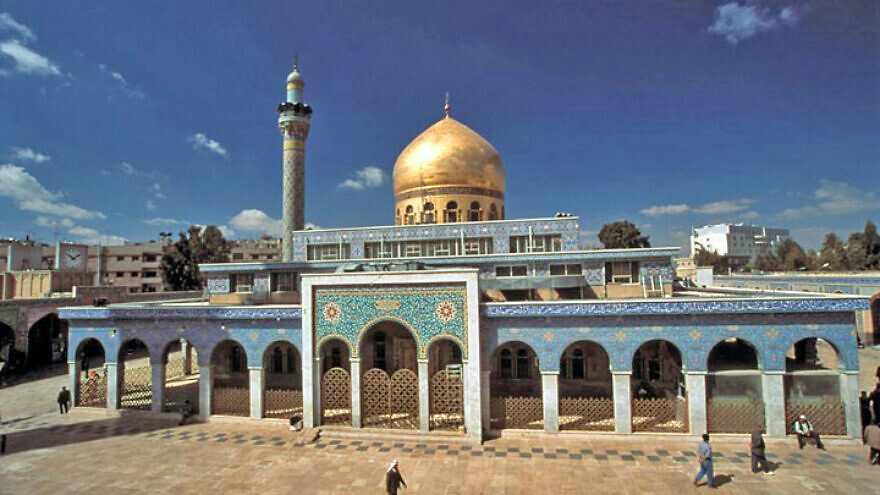 (October 4, 2022 / JNS) The Iranian-led radical Shi’ite axis is pursuing an ambitious “civilian entrenchment” program in Damascus’ southern outskirts, as part of a wider strategy of creating a logistical and military hub to serve the Islamic Republic, the Alma Research and Education Center, an Israeli security NGO, warns.

In a report published in late September, the Alma Center drew attention to the area surrounding the Sayyidah Zaynab Shrine south of Damascus, describing it as “an epicenter of a growing Shi’ite base with Iranian affinity.” The report called special attention to the changing nature of the area’s demographics.

Its author, Alma Center’s head of research Maj. (res.) Tal Beeri, told JNS that the failure to engage civilian entrenchment in Syria by Iran meant that Israel is engaged merely in “mowing the lawn in Syria” through airstrikes on military targets.

Instead, he called for a strategy that “tears the grass out by the roots,” using means such as sanctions and international pressure to “challenge the civilian infrastructure used by Iran to seed its presence in Syria in general, and in southern Syria specifically, on Israel’s doorstep.

“The civilian entrenchment is the root of the Iranian axis,” said Beeri. “It provides a civilian disguise for a military platform.”

The Sayyidah Zaynab area is built around the tomb of Zaynab, who was the granddaughter of Islam’s Prophet Muhammad and the daughter of Ali ibn Abi Talib, the fourth caliph from 656 until his assassination in 661 and the first-ever Shi’ite imam.

Tehran’s many activities at Zaynab reflect the fact that this area has been earmarked by the Iranian Revolutionary Guards Corps as a key zone in the Shi’ite corridor, which stretches from Iran across Iraq, Syria and Lebanon, and which is being built with “the strategic goal of exporting revolution in the Middle East,” according to Beeri.

“Zaynab serves as a logistical anchor and relay station for weapons transfers to Hezbollah in Lebanon,” he said.

In a pre-dawn attack on July 22, 2022, an airstrike targeted a weapons warehouse in the Zaynab region. ​​Beeri noted that the attack took place near an Iranian-built community center, which was completed in 2021 by the Jihad al-Bina development foundation.

“In our estimation, the attack was carried out against a shipment of electronic weapon components intended for Hezbollah’s precision missile project and its self-production of UAVs [unmanned aerial vehicles]. The attacked site was used as a temporary storage place in the civilian surroundings of Sayyidah Zaynab, thus serving as a human shield. The attack was carried out before it reached Hezbollah in Lebanon,” said Alma’s report.

According to Beeri, the proximity of the community center to the weapons warehouse serves as an “excellent illustration of the Shi’ite axis’s civilian entrenchment program, which it uses for human shielding tactics, and for creating favorable conditions for military build-up.”

From such storage centers, precision components for missiles can quickly reach Lebanon to the west by road.

The Iranian strategy includes a concerted effort to change the sectarian nature of the Zaynab region, he said.

“There is a significant trend of Shi’ite families moving into the area, from communities in northern and southern Syria (Shi’ites make up less than 1% of Syria’s native population)—but more so, from foreign Shi’ite arrivals, meaning families of Shi’ite militia members deployed to Syria by Iran from places like Iraq, Pakistan and Afghanistan,” said Beeri.

“They are taking control of the territory at Zaynab. This is visible through signs, graffiti and explicit evidence that local Sunni families have been compelled to sell their properties and vacate—and not at market prices,” he added.

In addition, Iran has fostered a highly active Shi’ite “tourism” scene at Zaynab, based on a mixture of real tourists and Revolutionary Guard operatives and foreign militia operatives, who use pilgrimage as an excuse to arrive in the area, Beeri said.

Since the start of 2022, some 125,000 Iranians have arrived at Zaynab under the guise of pilgrimage, according to Alma’s research.

“Anyone wandering around Zaynab would think they are in the heart of Tehran. They will find Shi’ite militias, IRGC and Persian-language signs and hotels. The area is under complete Iranian control,” said Beeri.

All of this leads the Iranian axis to implement its real goal at Zaynab: Setting up military command headquarters, weapons facilities, Shi’ite militia bases, intelligence control rooms, and other military infrastructure.

Many of the control rooms are jointly staffed by members of Hezbollah, the Iranian Quds Force and Shi’ite militia members, said Beeri. “There are also prisons and interrogation facilities there—a complete military infrastructure to support the Shi’ite corridor,” he added.

The military facilities that Iran is building at Zaynab are also close to Damascus International Airport, which means that weapon deliveries from Iranian flights can be quickly unloaded and sent to the southern Damascus area for storage and future transfer. Similarly, weapons smuggled in via the Iranian land corridor to Syria via Iraq can also find their way to the area.

“They are always switching areas— that is nothing new. From what we can tell, the geographical hub in Syria created by Iran is only growing stronger with time,” he said. “To what extent is it growing stronger—that is up for debate. But it is not declining.”