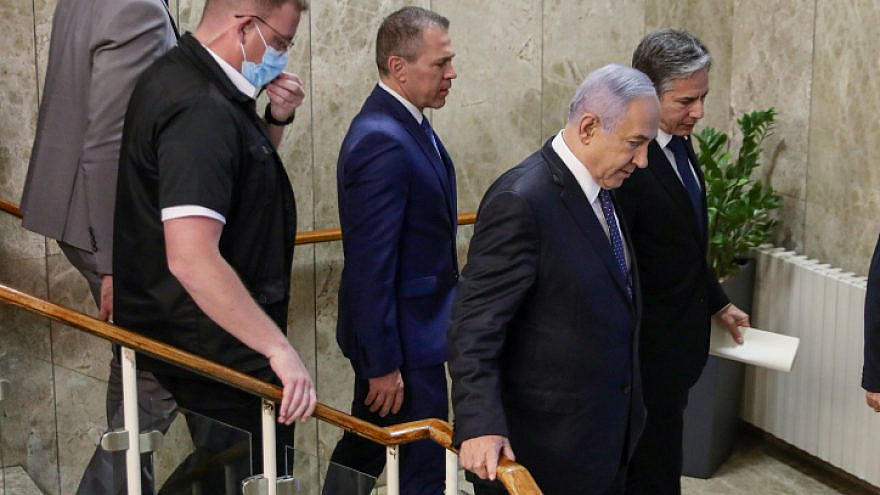 (May 25, 2021 / JNS) In a press conference in Jerusalem on Tuesday evening, U.S. Secretary of State Antony Blinken clarified the Biden administration’s stance on Iran and the nuclear deal—the Joint Comprehensive Plan of Action, or JCPOA. While he reaffirmed the current administration’s commitment to fixing some of the holes with a “longer and stronger” deal, and with a focus on Iran’s “support for terrorism” and “destabilizing proxy groups throughout the region,” he made it clear, like he already did earlier this week in an interview on CNN, that the United States intends to return to the original deal, which Israel has strongly opposed.

“The first thing we are trying to achieve is to put the nuclear problem back into the box that we constructed that was strong, solid and doing what we need it to do,” said Blinken, referring to the 2015 JCPOA, which Israel has slammed for being inadequate to deal with Iran’s hegemonic ambitions and spread of terror around the world.

He said the United States and Israel “are absolutely united in the proposition that Iran must never be allowed to acquire nuclear weapons,” but acknowledged that the two countries “sometimes have our differences with regard to the best way to achieve that goal.”

Israel and America are certainly at odds over the JCPOA and Iran’s intentions.

Contrary to Israel’s position that the deal failed to have a robust verification system in place, Blinken said “it was the most heavily monitored and verified agreement in the history of arms control.”

He added that, according to experts, “Iran was abiding by its commitments under the agreement.”

‘Israel will always reserve the right to defend itself’

Both statements may have raised some eyebrows in Israel and abroad.

Israel’s 2018 raid of an Iranian warehouse full of nuclear files proved that Iran had intended all along to go back to producing a nuclear weapon after the terms of the JCPOA ended.

During their joint press conference earlier Tuesday in Jerusalem, Israeli Prime Minister Benjamin Netanyahu said he had discussed the Iranian threat with Blinken and expressed hope that the United States “will not go back to the old JCPOA.”

Netanyahu also reiterated that “no matter what happens, Israel will always reserve the right to defend itself from a regime committed to our destruction, committed to getting the weapons of mass destruction to that end.”

Blinken’s visit comes after a number of developments on the Iran front.

Last week, just days after Israel shot down an armed Iranian drone near the border with Jordan, an explosion took place at the factory in Isfahan where drones are manufactured.

These developments are troubling and signal that Iran may be buying time to further its nuclear ambitions.

According to Ardavan Khoshnood, an associate professor at Lund University who specializes in Iranian foreign policy and the Islamic Revolutionary Guard Corps, “The Americans have a wrong analysis of Iran.”

“The U.S. is of the belief that the Islamic regime can be reformed, and that with time, they will change their malign behavior,” he told JNS. “This, of course, could not be more wrong. Iran has shown, over and over again, that it cannot be reformed. The Iranian regime is a theocracy. It is an ideological regime. Reform in these kinds of regimes does not happen by itself.”

As for the IAEA, Khoshnood said the agency can’t do much more, “especially now when the Biden administration in no way is interested in any confrontation with Tehran,” he said. “Without massive support from great powers, the IAEA is at its best lame and at its worst useless.”

Khoshnood said he doesn’t believe that the international community as a whole is aiming to appease Iran, “however, there are specific countries and even individuals with a specific political agenda which will appease Iran,” he said, adding that “many of them are afraid of what an Iran after the Islamic Republic may look like,” or that Iran “may become another Syria and Libya. Some actually are afraid of a lack of alternatives to the Islamic regime.”

‘Iran is playing its cards’

Yoel Guzansky, a senior fellow at the Institute for National Security Studies, told JNS he wasn’t certain if the two incidents of Iran sending the drone and Israel allegedly bombing the factory where the drone originated are actually related, but suggested that would be an amazing feat if it were true.

He said by blocking IAEA inspections, “Iran is playing its cards to pump up the pressure in the negotiations. It’s another card Iran can play; it doesn’t have a lot. They threatened they would do it, and they usually follow up.”

And that’s exactly what Israel is worried about. Iran has announced its determination to wipe out the Jewish state and is likely to follow through on its threat if given the opportunity. And that is why the nuclear talks underway in Vienna are so crucial to Israel.

“Israel is worried,” assessed Guzansky. “It seems Israel is out of the loop here, and the amount of influence it has is shrinking under the Biden administration.”

While Israel has voiced its concerns in Washington, Guzansky said Israel doesn’t yet know whether it has managed to influence the negotiations, “but we will see some sort of an agreement sooner rather than later.”