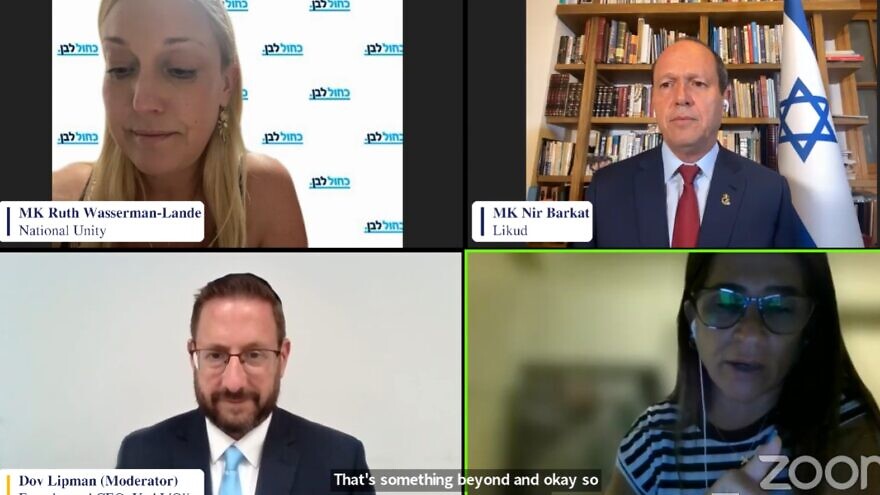 (October 3, 2022 / JNS) Seven Knesset members from across the political spectrum on Sunday night joined a JNS-sponsored debate on the pressing issues facing the Israeli electorate. Designed primarily for the benefit of English-speaking immigrants, the debate was jointly organized by two groups that focus on immigrant issues, Yad L’Olim and Telfed.

Founder and CEO of Yad L’Olim Dov Lipman, himself a former MK, hosted the debate. According to Dorron Kline, CEO of Telfed, which assists Australian and South African immigrants, it was meant to fill a “void in the education of the English-speaking [Israeli] public.”

The debate began with two-minute opening statements by each participating MK: Nir Barkat of the Likud Party, Simcha Rothman of the Religious Zionist Party, Merav Ben-Ari of Yesh Atid, Gilad Kariv of Labor, Ruth Wasserman-Lande of the National Unity Party, Yossi Shain of Yisrael Beiteinu and Mossi Raz of the Meretz Party.

That was followed by four questions (distilled from numerous online queries received from English-speaking Israeli voters) on 1. the Israeli-Arab conflict, 2. Iran, 3. Israel’s high cost of living, and 4. the relationship between religion and state.

Knesset members were given one minute to answer each question.

Q: What is your party’s plan to address the Israeli-Palestinian conflict?

Wasserman-Lande, a member of Gantz’s side of the combined list, defended the defense minister’s stance that support for the Palestinian Authority is necessary “to strengthen the security apparatus” in Judea and Samaria. She also argued for economic support for Palestinian Arabs. “What we must do is try to create sustainable sources of income and economic growth, at least temporarily, for the Palestinian population,” she said.

Labor’s Gilad Kariv said his party advocates renewing negotiations with the Palestinians. “The future of the Zionist enterprise depends on our ability to create a separation between Israel and millions of Palestinians and on securing a valid political future for the Palestinians at the same time,” he said.

Yesh Atid’s Ben-Ari agreed with the idea of separation and recommended listeners watch the Sept. 22 speech of the party’s head, Prime Minister Yair Lapid, at the United Nations for a better understanding of the party’s position. In that speech, Lapid expressed support for a two-state solution.

Meretz’s Mossi Raz seconded support for a “two-state solution and the end of the occupation.”

Likud’s Barkat disagreed, saying his party would agree to neither a two-state or a one-state (bi-national) solution, as the first would establish another terror entity like the Hamas-run Gaza Strip in Israel’s center and the second posed “a demographic threat to Israel.” Barkat suggested that the Arabs of Judea and Samaria should be viewed as “a bunch of tribes” and negotiated with along those lines.

Rothman of the Religious Zionist Party said the past teaches that whenever Israel cedes territory, it leads to terror. “Israel needs to control the Land of Israel. That’s why we came here. We came back to our ancient homeland. We are the indigenous people of the Land of Israel,” he said.

Q: Do you believe that the Iranian regime, the world’s largest state sponsor of terrorism, which is currently murdering its own people on their own streets, which repeatedly threatens to destroy the Jewish state, can be stopped from acquiring new weapons without direct Israeli military intervention?

Due to time constraints, only Ben-Ari and Barkat were given the opportunity to answer this question. They disagreed on whether Israel could go it alone. According to Ben-Ari, “The situation with Iran cannot be fixed by Israel by herself” and requires the cooperation of “its best ally, the United States.” Barkat said that while it would be better to work with partners, Israel must stop Iran even “if it’s by ourselves.”

The two debated the best way to convince Washington of the dangers of a nuclear-armed Iran. Ben-Ari insisted that opposition leader Benjamin Netanyahu damaged the U.S.-Israel relationship when as prime minister in 2015 he spoke before the U.S. Congress against the burgeoning nuclear agreement, saying that this was perceived as meddling in internal U.S. affairs.

Barkat said that the current Lapid-led government is not aggressive enough, and that in his recent visits to the United States senators he spoke with told him they were “deeply concerned” that Israel isn’t doing enough to combat a potential new Iran deal.

Q: What is your party’s plan to reduce the cost of living in Israel?

Israel’s economy has become a central election issue due to spiraling home prices and rising costs for basic items such as gas and food. Tel Aviv was named the most expensive city in the world last year, only recently losing the dubious honor to Hong Kong.

Religious Zionism’s Rothman said that dealing with housing prices is the single most important thing Israel can do to reduce the cost of living. He called for two reforms, one of the land laws, which would end the state’s virtual monopoly as the largest landholder, and freeing up areas in Judea and Samaria for construction. “We block ourselves from developing large numbers of new apartments in Judea and Samaria, very close to Tel Aviv, very close to the center of Israel,” he said.

Barkat agreed, saying that Israel’s Land Authority is “the biggest monopoly in Israel. You have to take it apart, especially in the Galilee, the Golan and the Negev.” Filling the market with low-cost land will create “opportunities for young couples.” He also said pro-business policies are needed and attacked the current government for raising taxes.

Ben-Ari, while agreeing that housing needed to be tackled, disputed Barkat’s version of events and said that taxes were only raised on disposable dishes and soft drinks as a way to fight obesity.

Labor’s Kariv called for an increase in the minimum wage and more free services, including in the areas of education and public health.

Q: What is your party’s platform regarding religion-and-state issues—do you want the status quo to remain or do you want to see changes and, if so, in what areas?

Israel wrestles with how to express its nature as a Jewish state in practical terms. The main issues are public transportation on the Sabbath, which in most places is suspended, and marriage—Jews in Israel must wed according to the strictures of Orthodox Judaism. Such laws have created tension with non-religious Israelis.

Raz said that Meretz supports a separation between synagogue and state. “We want to secure freedom from religion and also freedom for religion,” he said. “We want to make sure that people can use public transportation every day, including Saturday.”

According to Shain, Yisrael Beiteinu opposes Israel’s current marriage laws, rejects attempts to tighten Israel’s Law of Return and proposes better integration of the haredi, or ultra-Orthodox, community into wider Israeli society. The haredi sector, the fastest-growing segment of Israel’s population, resists efforts to enter the workforce and join the military.

Barkat and Rothman argued for maintaining the religious status quo. Barkat said the success he enjoyed as mayor of Jerusalem was due to the fact that he upheld that status quo in a coalition that included parties from across the political spectrum. “My interpretation of the status quo is that we will never bridge the different ideologies … The only thing we’ll be able to do if we want to live together side by side is understand that we can’t get everything we want,” he said.

The status quo allows people holding different views to live together, agreed Rothman. “Whatever you believe, you can live in the same country because you don’t try to impose your views on the State of Israel.”

Labor’s Kariv, the first non-Orthodox rabbi to serve in the Knesset, took issue with their position. “It’s unbelievable to hear the explanations of MK Barkat and MK Rothman. They are probably not disturbed by the fact that hundreds of thousands of Israelis cannot marry in their own country,” he said, adding that the status quo cuts against Israel’s democratic values and Jewish identity because it puts off many non-Orthodox Israelis.

“We strongly believe we need to create a new understanding around religion and state. The vast majority of Israelis support those moves and will push them in the next Knesset, including public transportation on Shabbat,” he said.

Wasserman-Lande described her National Unity Party as pluralistic and diverse, seeking to reach out to all communities. She warned that Israel is driving away Diaspora Jewry, “particularly the Jewish population of North America” due to “very specific policies pertaining to one stream of Judaism,” referring to the Orthodox hold on religious issues in Israel. At the same time, she said her party respects the Orthodox and the status quo. “We must solve this issue,” she said.

Speaking of “horrific obstacles” people must overcome in immigrating to Israel, Yad L’Olim’s Lipman asked the participants if they would support removing the bureaucracy that makes it difficult to move to Israel. All agreed they would help.

But contention arose when Rothman called for the elimination from Israel’s Law of Return of a clause allowing individuals not considered Jews according to Jewish law as long as they could prove descent from at least one Jewish grandparent. “The first step for a solution would be to remove the grandparent clause and then focus down the effort to actually bringing Jews that want to make aliyah to Israel,” he said.

“I think that we just heard one of the most extreme non-Zionist statements,” said Kariv. “The suggestion to change the grandparent clause will actually remove half the potential olim. It goes directly against the North American Jewish community and against the Jewish community in the former Soviet Union.”

According to Shain of Yisrael Beiteinu, “With Rothman’s theory, we would not have had the massive immigration from the former Soviet Union in the early ’90s. We will not have now all those thousands that are coming.” As a personal aside, Shain said that he had married an immigrant and when his son wanted to marry the rabbinate had asked him to prove his Jewishness, even asking if “you know any rabbi we can call?”

“We are in the midst of a struggle, a cultural war over Judaism,” he said.

Shain returned to this theme later in the debate during a question-and-answer period between Knesset members. “We are in a very important juncture in Jewish history,” he said. “The majority of the Jews will soon reside in the State of Israel. Israel will now define Jewishness itself, the direction of Jewish culture, and even the interpretation of the Jewish past and Jewish values. This is a huge responsibility.”