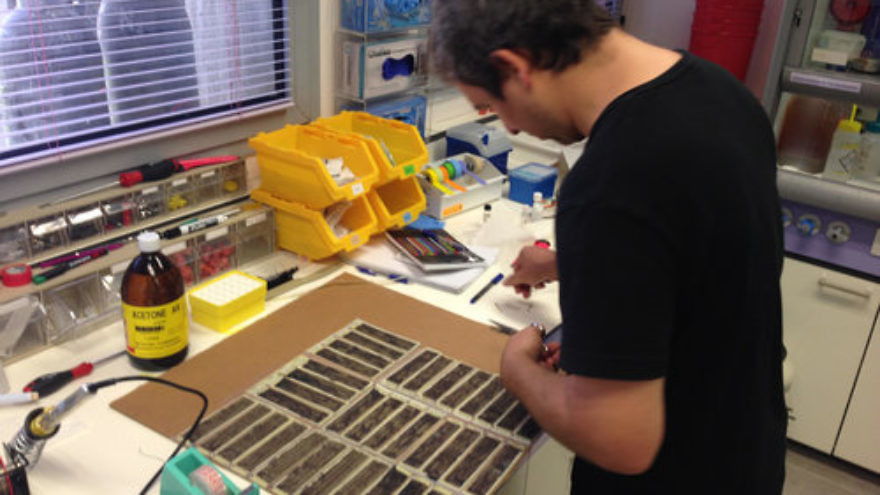 In October 2016, SpaceX and Tesla founder Elon Musk unveiled Powerwall II, a new high-performance rechargeable battery powered by a solar roof. These tinted-tile solar shingles mimic the look and feel of traditional roofing materials, replacing the bulky silicon panels that have been the norm.

“The goal is to have solar roofs that look better than a normal roof, generate electricity, last longer, have better insulation and actually have an installed cost that is less than a normal roof plus the cost of electricity…Why would you buy anything else?” Musk asks.

The SolarPaint start-up, based on Kibbutz Nahsholim in northern Israel, seeks to answer a similar question. SolarPaint’s “electrode-net” (ultra-thin wireframe similar to mosquito netting) and nanoparticle-infused coating can generate solar power by putting it on roofs, walls and in the future, even roads. This technology could be a game-changer, directly confronting the problem of limited land resources that has traditionally challenged the solar industry.

“What if we had a cheap way to generate electricity out of any object exposed to the sun merely by painting it?” Eran Maimon, SolarPaint’s chief technology officer and inventor, asks in a short promotional video posted on the company’s website.

Solar farms promise abundant clean energy—especially in sunny, desert climates like Israel. But they also require vast land tracts to produce the quantities of power necessary to fuel large population centers. Israel, a relatively small country (roughly the size of New Jersey) that is devoid of natural oil resources and threatened by hostile neighbors, has every reason to seek a solution to its energy needs that is both space-efficient and renewable.

Maimon first had the idea for SolarPaint in 2013. He promptly wrote a provisional patent, and in 2014 he began seeking investors. SolarPaint initially raised $1.25 million from Israeli angel investors and the Israeli government. The company is now on the classic “start-up nation” trajectory, aiming to soon pilot a production phase that will repurpose existing factory infrastructure in Israel to manufacture high-quality coated solar wallpaper rolls that feature “photovoltaic paint.”

If SolarPaint succeeds in demonstrating the viability of its products, the next step will be to “go global,” Maimon tells JNS.org.

SolarPaint’s intellectual property is closely guarded, and CEO Oded Rozenberg is reticent to speak at length about the ingredients of the “photovoltaic paint.” But he happily reveals the priorities that Maimon’s initial research addresses.

“Our selection process [for materials] was always in the following order: first it needs to be stable, abundant and low cost, and only after that it needs to also be efficient enough to be commercially viable” he says.

SolarPaint’s current price is $3.26-3.72 per square foot, Maimon says. This is a drop in the bucket compared to the expense of flexible solar panels, and even cheaper than conventional silicon panels. As of 2016, EnergySage.com estimates that installing a full solar panel system to power an individual household costs, on average, more than $12,500 after tax credits. SolarPaint’s energy yield is 30-50 percent more efficient per square foot than what a regular panel produces. Further, SolarPaint contends that when consumers factor in the surface versatility of the start-up solar wallpaper rolls, the price advantage over other products is even greater.

Maimon suggests that this next-generation solar technology has the potential to render obsolete the giant solar and wind farms that are constructed around the world. Likewise, he predicts a significant change in the way electricity is delivered to consumers.

“I think we will have more ‘prosumers’—producers that are also consumers,” he says. “There will also be micro-grids, and smaller, more secure and robust networks.”

“Israel is a great place for start-ups” like SolarPaint, Maimon reflects, describing a collegial atmosphere in which “it’s not a competition [but rather] a synergy.”

The company has forged enduring partnerships with academics, entrepreneurs and manufacturers throughout Israel. These partners share a seemingly patriotic interest in the company’s success.

Another advantage that Maimon highlights is the absence of an oil lobby in Israel, removing a common barrier to innovation in the solar industry. Instead, “we have an anti-oil lobby and a government initiative for finding alternative fuels,” Maimon says.

In the U.S., by contrast, the nascent Trump administration was quick to issue executive orders approving the controversial Dakota Access and Keystone pipelines, and is signaling support for renewed development of coal resources.

Rozenberg suggests that Americans have soured on solar in part because Chinese photovoltaics manufacturers have increased capacity and dropped the prices of solar panels, causing most companies in this field to go bankrupt. “Many Western companies couldn’t compete, investors lost huge amounts of money and now, in the West, people are hesitant to invest,” he says.

The volatility of the global energy market, in turn, may create a significant opportunity for SolarPaint to emerge as a leader in its niche. The start-up’s recent round of fundraising yielded $2 million, enough to cover operating expenses for the next 18 months.

Conscious of the solar industry’s cutthroat nature, Rozenberg and Maimon believe timing is everything.

“We don’t think we can compete in the short term with traditional silicon solar panels,” Rozenberg says. “We want to start sales at the end of 2019. Then we will be competitive already.”