(June 18, 2021 / JNS) The fact that Hezbollah is deeply embedded in some 200 southern Lebanese villages is well known, but what is less known is the role played by the terror organization’s local administrators.

Now, a new report published on Monday by the Israeli Alma Research and Education Center, a security watchdog, sheds new light on the role of the Rabat, Arabic for “liaison.”

When Hezbollah’s units in southern Lebanon need fuel, food or logistics, it is the Rabat who will deliver, according to the report. When the Iranian-backed organization needs to find a new civilian home to plant rockets in, the Rabat will be there, directing them to the right place.

Maj. (res.) Tal Beeri, who served for 20 years in the IDF’s Military Intelligence Directorate, is now head of Alma’s research department. He told JNS that the Rabat plays a critical role in Hezbollah’s ability to install weapons in civilian areas in Lebanon.

“The Rabat maps out locations in the village where Hezbollah can place its missiles,” said Beeri.

The liaison’s ability to do this stems from his authority in his area of jurisdiction.

“The Rabat serves as Hezbollah’s senior representative in a village,” Alma’s report stated. His duties are wide-ranging, including deciding the identity of village officials representing Hezbollah. “His word is final,” the report added.

“One Rabat may be appointed to several small, nearby villages. An area supervisor is appointed above the local Rabats,” it said, indicating how highly structured Hezbollah’s “state-within-a-state” truly is.

The questioning of a Hezbollah prisoner from the 2006 Second Lebanon War shed further light on the process that enables these administrators to control their areas, and boost Hezbollah’s tactic of using human shields by hiding powerful weapons in villages.

The questioning shed light on how, in the southern Lebanese village of Ayta ash Shab, “Hezbollah rents the houses and apartments. The properties are leased after Hezbollah address the person in charge of the village on its behalf (the Rabat),” the report said. The liaison then coordinates communications between Hezbollah and the relevant property owner. Prior to selecting the property that will act as a rocket-storage or launch center, the Rabat conducts a full clearance process to ensure that the location is suitable, said Beeri. “It’s not an automatic process. At the end of the clearance, the Rabat makes his recommendations to the Hezbollah unit that is looking for a civilian home.”

In most cases, Hezbollah offers rent money, but in others, the organization simply seizes the property, which always belongs to Lebanese Shi’ite village residents.

With time, said Beeri, Hezbollah understood that paying rent is preferable to avoid stirring up resentment.

“In open areas, if the property is privately owned, Hezbollah often declares an area of interest as a ‘closed military zone,’ ” he added.

The Hezbollah liaison system is a central aspect of the organization’s ability to operate freely and install civilian and military infrastructure in southern Lebanon, according to Beeri.

“They are considered to be central Hezbollah operatives in the areas they work,” he said.

The Alma report was able to expose the identity of 23 such liaisons throughout southern Lebanon.

“These are not mysterious figures. The village knows who the Rabat is. Anything that happens in the village must receive his approval. He deals with both the military and civilian matters,” explained Beeri.

Even in civilian matters, such as providing financial assistance to civilians or help with food during the pandemic, the Rabat became involved. He also acts as a local arbitrator, settling disputes. And the final call on who is entitled to Hezbollah aid, including fuel and money rests, with him.

The liaisons played a central role in allocating Iranian, Saudi and Qatari reconstruction money that poured into southern Lebanon following the Second Lebanon War. “Hezbollah asked their rabats who should get the money,” said Beeri.

The liaison is present at all communal events, such as social ceremonies, sporting events, and council meetings.

According to Alma’s report, “The Rabat system in southern Lebanon is another clear sign that the ‘state of Hezbollah’ actually controls the state of Lebanon and that Hezbollah’s power is derived from its connections to the people—Hezbollah put much work into cultivating these connections,” the report noted.

The amount of power focused in the hands of the Hezbollah liaisons opens the door to corruption and exploitation of power, said Beeri.

A prominent example of this occurred in August 2019, when a Lebanese man who had ties to the village Rabat incited an attack against a woman who refused to sign a Shi’ite temporary marriage contract, which is usually meant “purely for pleasure,” with the woman receiving the role of a type of mistress.

Eventually, some of the residents, in cooperation with Hezbollah operatives, attacked the woman, throwing her out of her home with her belongings. 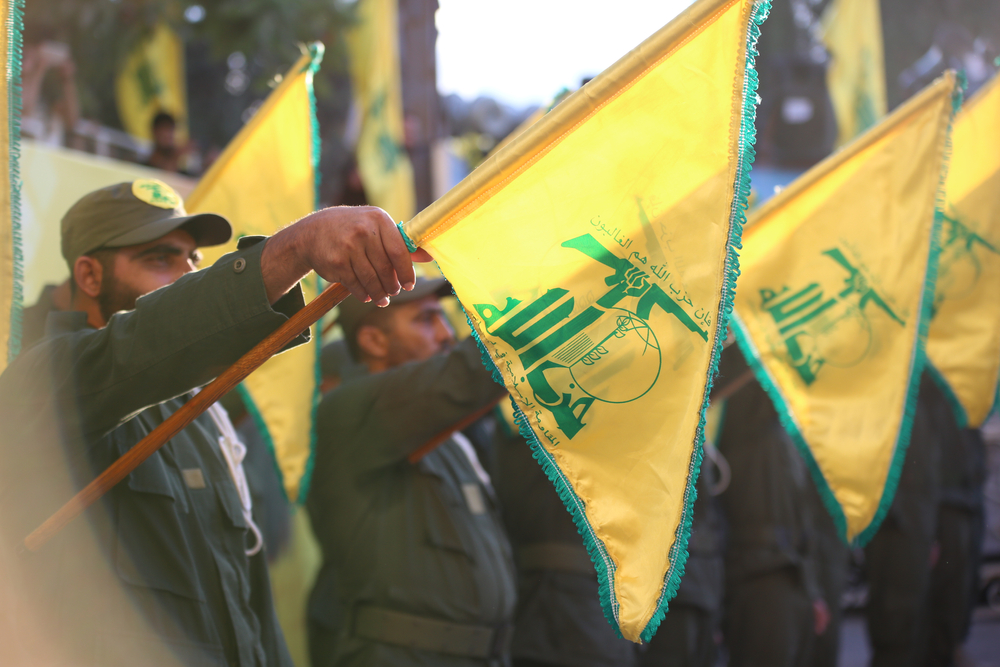 Flags of Hezbollah fly during a funeral salute. Credit: Shutterstock.

‘They know Hezbollah is the central address’

The Rabat also enables Hezbollah’s units to remain constantly supplied with fuel, food and all other logistical needs.

“Someone has to arrive and provide these things to the units,” said Beeri.

“The Rabat calls the gas stations and the service providers, and makes sure the supplies are coming in. Ultimately, their goal is either to rent property or procure business services. They often turn to local Hezbollah operatives who are also business owners or property owners. But that is not enough. So they also have to turn to local civilians for rent and business service needs,” he explained.

In addition to these roles, Hezbollah’s liaisons are also the local “police officers” of the organization, making sure that its wishes are enforced. Those who refuse to rent their property to Hezbollah risk facing “real pressure,” said Beeri, but this only occurs if the organization decides that the location is supremely important.

“Hezbollah does not want to lose its support base. Hence, only in certain cases of refusal, it will make the property owners ‘an offer that can’t be refused.’ Most of the population accepts these requests. They get favors in return. They know Hezbollah is the central address, and they don’t want to find themselves dealing with Hezbollah’s security unit,” he added.

Similarly, if Hezbollah wants to arrest someone in a village, it will consult with its local liaison and gather intelligence on their routines, workplaces and roads most often traveled and when.