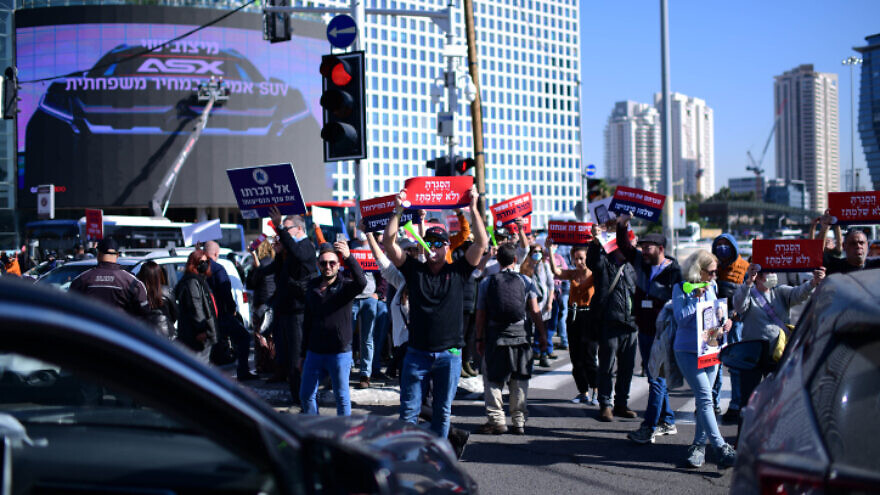 (January 11, 2022 / JNS) For two years now, since the outbreak of the worldwide coronavirus pandemic, hotels in Israel have seen dramatic drops in stays by incoming tourists; tour guides have lost most, if not all, of their business; and restaurants and other business owners who rely heavily on visitor traffic have suffered catastrophic and often irreversible damage, with many forced to close. The question on everyone’s mind is: When will tourism to Israel pick up again?

Jerusalem Deputy Mayor Fleur Hassan-Nahum told JNS that the tourism industry has been most affected by COVID-19 and related closures and restrictions.

“For Israel, it has been completely devastating,” she said.

Even though Israel is now allowing in tourists, “people are still cautious,” she added; “it will take a few years” before Israel returns to pre-coronavirus numbers, which, in 2019, stood at a whopping 4.5 million tourists. At the time, it seemed likely that 2020 would be the year to break another record with 5 million tourists.

Still, Hassan-Nahum said she remains optimistic about the future and hopeful that the coming year will be fruitful in terms of a rebound in tourism to Israel.

She also said that she believes this is going to be “the year of Gulf tourism to Israel by Muslim pilgrims coming for the first time,” adding that she is hoping for at least 200,000 tourists from the Gulf and neighboring regions.

On Jan. 6, Israel announced that it would scrap its “red list” of countries and reopen the skies to incoming and outgoing travelers, including foreign tourists, who must be either vaccinated or recovered. This return of freedom to fly, however, still includes the need to undergo a PCR test before the flight, before a return to Israel and then once again immediately upon landing in Israel. Tourists must then quarantine for 24 hours upon arrival in Israel or until they receive a negative test result.

For weeks, the public has clamored for the lifting of restrictions on flying and placed heavy pressure on politicians to assist.

Earlier this month, Israel’s Diaspora Affairs Minister Nachman Shai and Tourism Minister Yoel Razvozov demanded that the government reopen Israel’s skies to international visitors and tourists. Shai said the closures are “fracturing ties with Jews in the Diaspora,” while Razvozov said tourists are unable to visit Israel due to coronavirus rules that “have no medical value.”

For now, the public appears to have gotten its wish, but there is no telling how long it will last. Tourists are still afraid to arrive in large numbers since there is no way to predict what restrictions will look like in a week, and it is impossible to plan such trips with such little confidence. For this reason, it is impossible to know when tourism to Israel will rebound since the skies can be closed from one day to the next.

According to the Israeli Ministry of Health’s website, as of Jan 11, there were 185,753 people across the country who had tested positive with 247 seriously ill.

With these numbers in constant flux, tourists are still worried about traveling to Israel, and the Israeli government is worried about a massive stream of foreigners entering the country at a time when the Omicron variant of coronavirus is still raging.

Dan Ben-David, who heads the Shoresh Institution for Socioeconomic Research and is also an economist at Tel-Aviv University, told JNS that on average, the effect of the pandemic on Israel “has been considerably less than other developed countries.”

“Israel has weathered this relatively well on average in terms of GDP, which is higher than it was prior to COVID two years ago,” he said. “In most OECD countries, the recovery hasn’t been complete.”

“We also have literally the strongest currency in the developed world and one of the lowest inflation rates,” he added. “Israel is doing fairly well.”

“But this is a bit misleading,” he said. “The problem is that Israel is a very divided country” when it comes to the economy. “There are really two Israel’s in one.”

Ben-David pointed out that while the high-tech side of Israel, which is roughly about 10 percent of the workforce, did very well in weathering the pandemic, “a vast majority of people in Israel don’t belong to high-tech.”

In fact, a huge number of people in Israel are very poorly skilled, which means the service industry and other low-paying industries were among the hardest hit, he said.

“High-tech in general in the developed world was hit less than other sectors, and since Israel is much more dependent on high-tech, that impact helped lessen the overall damage,” he said.

According to the Ministry of Tourism in a statement to JNS, “The corona pandemic decimated Israel’s tourism industry with the abrupt closure of all incoming tourism in March 2020, after a consistent period of increasing growth. 2019 was a record year for incoming tourism to Israel, with revenue of NIS 23 billion [$17.4 billion]. Incoming tourism plunged to just 832,500 tourist entries in 2020 and 401,500 in 2021 (with revenue of approximately NIS 2 billion, or $641 billion).

The ministry said it has “worked throughout the pandemic to ensure that awareness of Israel as a safe, attractive tourism destination remains high.”

While it is impossible to discuss forecasts for 2022, given the unpredictability of the pandemic, the ministry said it “remains optimistic and is ready to welcome tourists back to Israel to enjoy its varied tourist, historical, religious and cultural sites.”

Taking advantage of the two-year period with no tourists, Israel has been repairing infrastructure and even building new hotels, as well as upgrading tourist sites.

With her usual enthusiasm, Hassan-Nahum repeated her hopes for a better tourism year, saying “Israel is prepared, and hotels are raring to go.”