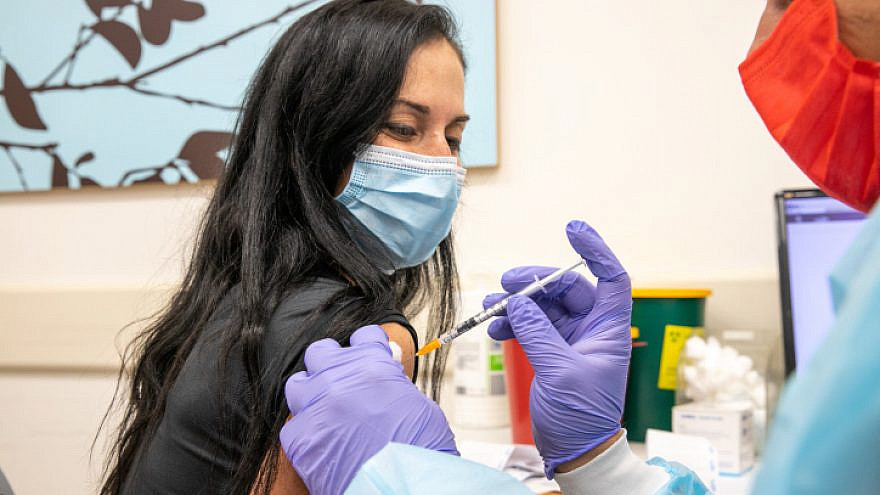 (January 19, 2021 / JNS) Israel’s Ministry of Health lowered the age of those eligible to receive the coronavirus vaccine to 40 on Tuesday. At the same time, the ministry ordered the country’s four health management organizations to prepare to distribute a quarter of a million vaccines per day.

The directive comes as the country faces a spike in infections, with more than 10,000 Israelis testing positive for the virus on Monday.

The ministry also published a position paper authored by doctors of the Israeli Association of Obstetrics and Gynecology, together with the doctors of the National Council for Gynecology and Genetics and the Israeli Society of Maternal and Fetal Medicine, recommending inoculation for pregnant women—albeit each in consultation with her own doctor.

“There is no scientific basis or facts that indicate infertility as a result of the vaccine,” the paper stated. “Coronavirus can be harmful during pregnancy, causing more serious illness and premature birth.”

Several pregnant women with no prior health conditions are now in hospitals fighting for their lives due to what doctors say appear to be a more violent mutation of the disease, reported Ynet.

Israel’s current and third national COVID-19 lockdown began on Dec. 27. Restrictions were tightened on Jan. 8 as morbidity continued to rise, with the Health Ministry confirming the presence in the country of both the U.K. and South African variants of the coronavirus.

According to the results of a serological study conducted by Tel Aviv’s Sheba Medical Center at Tel HaShomer, more than 98 percent of the people who received both doses of the COVID-19 vaccine developed antibodies that neutralize the virus.

Israel kicked off its vaccination campaign last month, with members of the over-60 population to receive the first dose. The age group was lowered to those above the age of 55, then 50, in the weeks that followed.