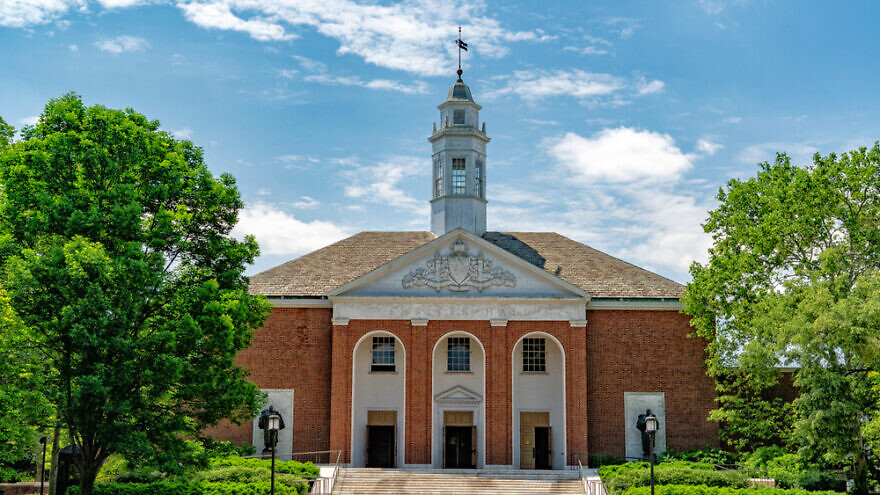 (July 20, 2021 / JNS) Six months after a teaching assistant at Johns Hopkins University polled followers on Twitter about giving “Zionist students” lower grades, the school has yet to take any public action, according to a July 9 letter to school administrators.

StandWithUs joined with the Louis D. Brandeis Center in penning the letter demanding that public action be taken to denounce anti-Semitism and anti-Zionism.

It was back in November 2020 that a teaching assistant who was identified by media outlets as Rasha Anayah tweeted a poll that asked “ethical dilemma: if you have to grade a Zionist students exam, do you still give them all their points even though they support your ethnic cleansing like idk [I don’t know].”

She posted the results showing 22 percent of the 18 people who voted “yes be a good ta” 78 percent voted “free palestine! fail them.”

Noting that the school has conducted an investigation into the actions of Anayah—an investigation whose findings the school has not made public—the two groups wrote, “While the investigation is an essential first step, it is just that—a first step. Not only is the university able to do more, it must do more, as a matter of federal civil rights law and university policy, as stated, e.g., in its ‘Discrimination and Harassment Policy and Procedures’ and its media guidelines.”

“The students are concerned that the school is not taking a bold stand,” said Roz Rothstein, CEO of StandWithUs. Instead, students fear Johns Hopkins is sending a message that “either they don’t care enough to make a statement or that things like this might be tolerated or that there might be grade reprisals if a student identifies as Jew and a Zionist.”

Rothstein added that Johns Hopkins is not known for having a culture that promotes anti-Semitism or anti-Zionism. But this incident sets a troubling precedent, given how “blatant” the anti-Semitism and anti-Zionism was in this case.

According to vice president of communications Andrew Green, the university is bound by the Family Educational Rights and Privacy Act of 1974, which “prohibits us from disclosing the details or outcome … .”

“As we have said publicly many times, Johns Hopkins unequivocally condemns anti-Semitism in all its forms,” he stated, noting that school officials have communicated their commitment to “to protect the safety and well-being of all members” of the Johns Hopkins community.

“Academic integrity is a foundational value of our institution, including the principle that all work should be judged on its merits alone,” said Green. “Bringing any other factors into the instructor-student relationship is a fundamental breach of that principle, and particularly so if those factors are based on bias or hate.”

“Not only do we find discrimination based on factors such as race, religion and national origin to be unconscionable, but they are incompatible with our academic community’s devotion to the free and open exchange of knowledge and ideas, which can only be accomplished in an environment of mutual respect and equal treatment, including with respect to academic decision-making and support,” he continued.

‘Allowing a hostile environment to fester’

In an interview with JNS, president of the Brandeis Center Alyza Lewin said that one piece of the story that most people haven’t fully appreciated is the impact of the TA’s actions.

“Not only was there a TA who threatened to lower the grade of the Zionists, she riled up students to turn against Zionists” by publishing a poll on Twitter “basically inciting followers to turn on the Zionists and agree that Zionists should be treated differently. No TA, no faculty member, no teacher, no staff should have that kind of conduct,” she said. “It should be unacceptable.”

Because the school has not taken any public actions—or even come out with a strong statement condemning the TA’s words—Lewin believes that they are allowing a “hostile environment to fester, [one that] suggests to other staff members that it’s OK to tweet that Zionists should not be welcome.”

She urged the academic institution to adopt the International Holocaust Remembrance Alliance (IHRA) working definition of anti-Semitism, which has become the standard recognized by many cities, countries and organizations.

Lewin also asked administrators to make a statement acknowledging that for many Jews, Zionism is an “integral” part of their identity, and that they have a right to feel safe and included on campus expressing that.