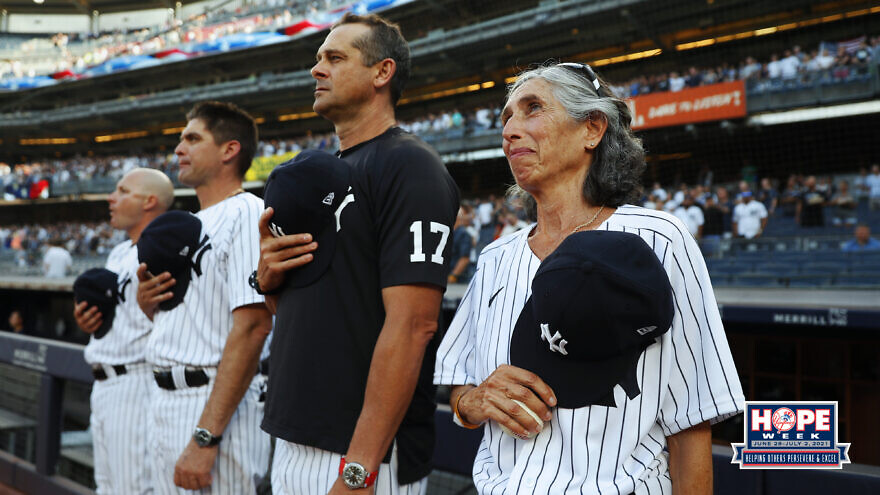 (July 2, 2021 / JNS) A Jewish mom finally got to be a bat girl for the New York Yankees on Monday night 60 years after her request was originally turned down because of her gender, ESPN reported.

Gwen Goldman, 70, a retired social worker in Westport, Conn., served as bat girl at Yankee Stadium for a game against the Los Angeles Angels. During a news conference in the fourth inning, she said the experience “took my breath away.”

“It was a thrill of a lifetime—times a million,” she added. “And I actually got to be out in the dugout too. I threw out a ball. I met the players. Yeah, it goes on and on. They had set up a day for me; that is something that I never would have expected.”

Wearing a full Yankees uniform, Goldman threw out a ceremonial first pitch to Yankees player Tyler Wade and then stood next to manager Aaron Boone for the national anthem. She was later introduced to the crowd before she walked onto the field and waved her cap as fans applauded.

Goldman was 10 years old when she wrote a letter to the Yankees asking them to be their bat girl. Then-Yankees general manager Roy Hamey wrote back to her in a letter on June 23, 1961, saying in part: “I am sure you can understand that it is a game dominated by men a young lady such as yourself would feel out of place in a dugout.”

Current Yankees general manager Brian Cashman told Goldman during a Zoom call that he was forwarded an email, written by Goldman’s daughter, about her rejection in 1961. He then read out his own letter, inviting Goldman to be a bat girl as part of the Yankees’ annual Helping Others Persevere & Excel (HOPE) Week.