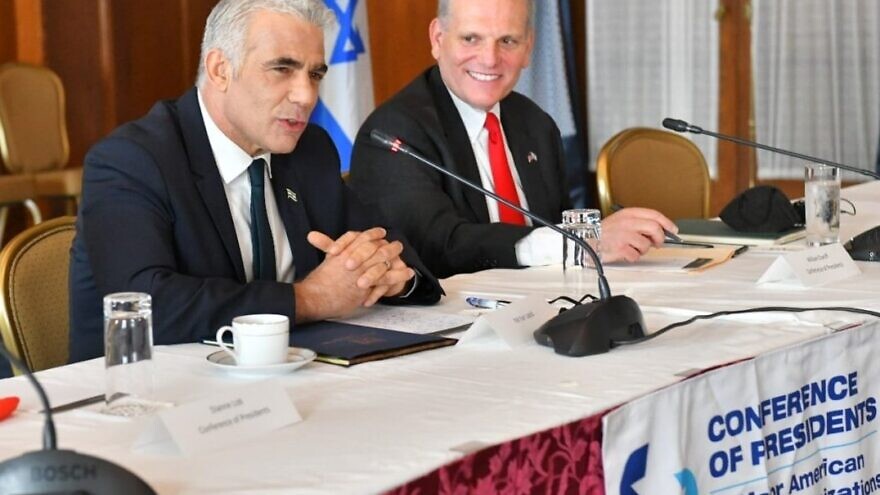 (October 14, 2021 / JNS) During the third and final day of his visit to the United States on Thursday, Israeli Foreign Minister Yair Lapid met with an array of lawmakers and Jewish groups, including leaders of member organizations that make up the Conference of Presidents of Major American Jewish Organizations.

In a joint news release following the meeting, Conference of Presidents chair Dianne Lob, CEO William Daroff and vice chair Malcolm Hoenlein said they were honored to host the meeting on Lapid’s first visit to the United States in his current position.

According to the release, Lapid spoke to the group about the importance of the U.S.-Israeli relationship, and the need to keep the safety and security of Israel a bipartisan issue, believing that it remains critical to strengthen the relationship between Israel and the American Jewish community.

“The Jewish community around the world is our family. That’s why I was glad to spend time with leaders from the [Conference],” he tweeted. “I’m looking forward to continuing to work together to advance the issues we all care so deeply about.”

“We are grateful for this partnership, and for today’s meeting, which reflects the enduring strength of the U.S.-Israel relationship. We look forward to continuing to strengthen the U.S.-Israel relationship, to develop and advance the progress of Israel’s diplomatic engagement through the Abraham Accords, to combat the growing threat of the extremist regime in Iran, to work together to combat the scourge of global anti-Semitism, including through promoting the adoption of the IHRA definition, as 51 of our member organizations have done, and to engage on many other issues of mutual concern,” wrote the leaders.

Lapid spent the rest of the day holding leisurely meetings with organizational leaders and lawmakers on the outdoor patio of the Café du Parc, attached to the Willard Intercontinental Hotel, a block from the White House.

Among the lawmakers he met with included Sen. Jon Ossoff (D-Ga.), who is Jewish.

“It was a great opportunity to discuss the future of the US-Israel relationship and thank him for his support for Israel’s security,” Lapid wrote on Twitter.

He was joined by representatives from AIPAC, which tweeted: “The U.S.-Israel partnership is deeply rooted in shared values, strategic interests and a commitment to improving the lives of the people of both countries.”