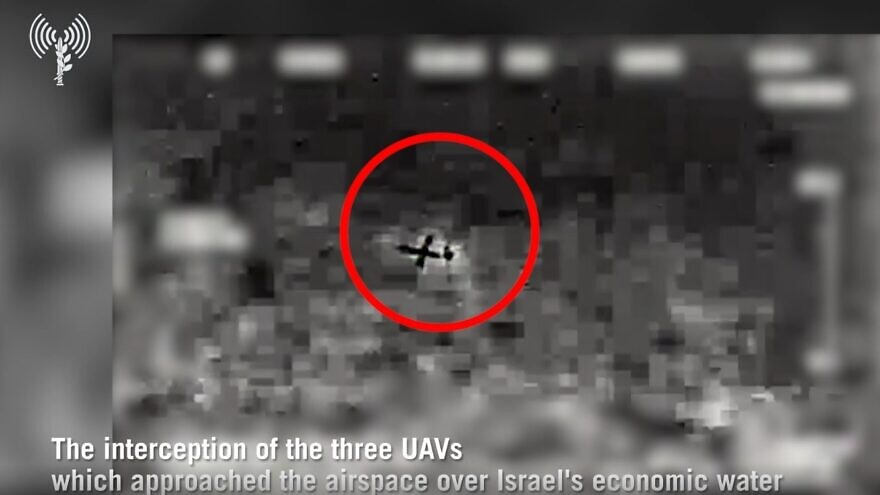 (October 30, 2022 / JNS) Outgoing Lebanese President Michel Aoun told Reuters on Saturday that Hezbollah’s drone attack against Israel’s Karish natural gas field in July was “useful,” as it served as a “deterrent” that tilted negotiations over the maritime border deal in Lebanon’s favor.

Jerusalem and Beirut on Thursday signed the U.S.-mediated agreement, which draws a border between the two nations’ exclusive economic zones (EEZs) based on a boundary known as Line 23. It awarded a disputed area of around 840 square kilometers (324 square miles) to Lebanon, while recognizing Israel’s claim to the Karish gas field and to royalties from the section of the Qana field that extends into the Jewish state’s EEZ.

Israeli Prime Minister Yair Lapid hailed the accord, contending it “strengthens Israel’s security and our freedom of action against Hezbollah and the threats to our north.”

On July 2, Hezbollah launched three unmanned aerial vehicles toward Karish, all of which were intercepted by the Israel Defense Forces. Later that month, Hezbollah chief Hassan Nasrallah threatened war if Israel began pumping gas from Karish in the absence of an agreement with Beirut.

“If the extraction of oil and gas from Karish begins in September before Lebanon obtains its right, we would be heading to a ‘problem,’ and we’ll do anything to achieve our objective,” he told the Hezbollah-affiliated Al-Mayadeen TV channel, according to Lebanese news site Naharnet.

“No one wishes for war, and the decision is in Israel’s hands, not in our hands,” he said, according to the report.

On Saturday, Nasrallah gave a speech in which he reportedly stated that there remained a maritime area under Israel’s control that needed to be “liberated,” seemingly contradicting widespread assurances that the border agreement fully resolved the dispute.

Nasrallah furthermore attributed the deal to the threat of conflict created by his Iranian-backed terrorist group.

Israeli opposition leader Benjamin Netanyahu earlier this month slammed the deal and accused Lapid of caving in to Hezbollah.

“Yair Lapid shamefully surrendered to Nasrallah’s threats,” Netanyahu reportedly stated, adding: “He is giving Hezbollah sovereign territory of the State of Israel with a huge gas reservoir that belongs to you, the citizens of Israel.”