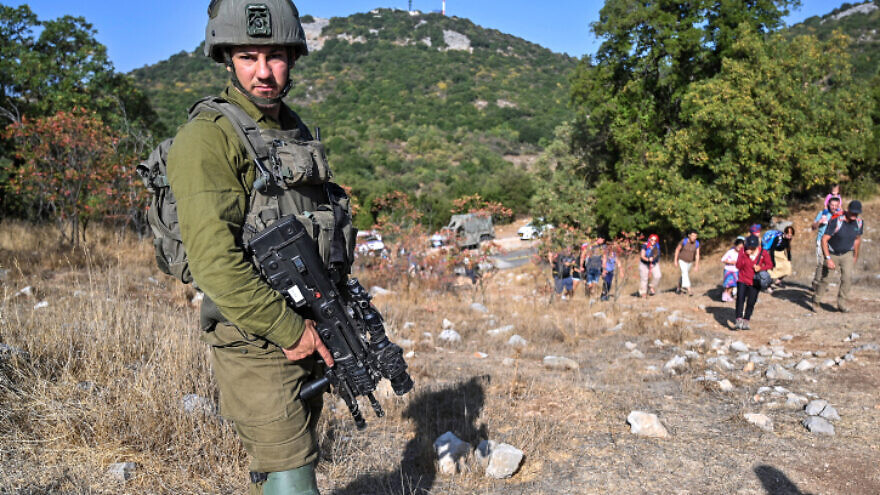 (December 22, 2021 / JNS) The deadly explosion that tore through a Hamas arms depot on December 10 in a mosque in the Burj Al Shimali refugee camp, in the southern Lebanese city of Tyre, is a vivid reminder of Hamas’s growing organized armed presence on Lebanese territory – and Iran’s role in helping it grow.

Two months before the blast, the mosque at Burj Al-Shimali was flagged as a central weapons manufacturing workshop in a detailed report by the Alma Center, a security watchdog based in northern Israel.

Hamas’s growing armed presence is not only a serious challenge for Hezbollah, due to Hamas’s independent decision-making on when to fire rockets at Israel – it is also creating a challenge for Fatah in Lebanon, Maj. (res.) Tal Beeri, director of the research department at the Alma Center, told JNS.

“Hamas does not just see itself as a guest in Lebanon,” said Beeri, who served for 20 years in the IDF Military Intelligence Directorate.

“It is a serious challenge for Hezbollah on Lebanon, because of its independent activities and force build-up, and it is also in a state of significant tension with Fatah, the central Palestinian movement in Lebanon,” he stated.

All of this serves Iran well, giving the Islamic Republic multiple proxies and allies that it can encourage to act against Israel from Lebanon, and giving it options when Hezbollah wishes to focus on domestic Lebanese crises and to dial down tensions with Israel.

“According to the documents we have, Hamas aspires to create precise rockets, guided by GPS, with a range of 20 kilometers at the first stage,” said Beeri. “This is a secret project.”

In 2018, Hamas came up with a working plan for Lebanon, sketching out the building of battalions with hundreds of members, and creating an elite attack force that is a mirror image of the elite Nahbe strike force in Gaza, based on 130 terror operatives.

“Their goal is to be able to fire 200 rockets at Israel from Lebanon in two rounds of fighting, or 100 rockets per round,” said Beeri. “Until now, only Hezbollah had such capabilities. It is unheard of for another organization in Lebanon to deploy such firepower.”

Other plans include setting up 122 millimeter mortar shells that are launched automatically by a timer, meaning that even when Israel locates the source of fire, it won’t have a target left to hit after the mortar is launched.

Fatah, which is the dominant movement at the Burj Al-Shimali refugee camp, is certainly unhappy to see Hamas building weapons “under its nose,” Beeri assessed. “This is the basis for the funeral gun fight, which was likely the result of an organized decision rather than a local initiative,” he added. “Fatah suddenly sees a weapons storehouse explode, causing damage. This could be motivation for it to settle accounts with Hamas.”

In Lebanon, Hamas sees a new front that it can activate against Israel in addition to the Gaza Strip, giving it operational flexibility.

This force build-up program is occurring with the active support of the Palestinian Branch of the Iranian Quds Force, the overseas special operations unit that nourishes Iran’s proxies throughout the Middle East with weapons, training and funding, according to Beeri.

He named Hamas’s “Construction Bureau” – a headquarters operation responsible for Hamas’s force build-up in all sectors – as the body overseeing Hamas’s workshops in Lebanon.

“Most of the Construction Bureau’s people are in Turkey, but today, for security reasons, many of them moved to Lebanon,” said Beeri. This includes Hamas’s Deputy Political Bureau chief Saleh Al-Arouri, who is responsible for building West Bank terrorism cells.

“Within Lebanon, Hamas has two central operational units. All told, there are hundreds of Palestinian operatives in Hamas – Lebanon, active in multiple refugee camps,” Beeri said.

With a population of some 200,000 Palestinians in Lebanon, focused in 10 central locations, Hamas can continue to recruit more operatives as its looks to expand its presence in all Palestinian refugee camps in Lebanon.

As Fatah feels increasingly cornered by Hamas in Lebanon, it is experiencing an eerie sense of déjà vu, as it was Hamas that toppled Fatah violently from power in Gaza in 2007, and it is Hamas that is continuously seeking to undermine the Fatah-run Palestinian Authority in the West Bank.

“Hamas is all of the time eroding Fatah and seeking to slowly consolidate its power. This is happening in Lebanon too, and it reminds Fatah of Gaza, sparking real fears,” said Beeri. “It appears as if Fatah has learned from history to be more active in stopping this.”

“Its military power is growing,” Beeri noted. “We saw early signs of this force during the Hamas-Israel conflict in May this year, when Hamas fired rockets at northern Israel from Lebanon.”

This gives Hamas a “victory picture,” showing the Palestinian street in general, and in Lebanon specifically, that it is acting against Israel and not Fatah, Beeri explained.

Returning to the December blast at the mosque, Beeri said it was no surprise that the Hamas operative killed in the explosion was a production engineer, linking him to Hamas’s Construction Bureau.

Alma’s October report lists 10 more sites across Lebanon used by Hamas to build weapons and train operatives on how to use them, including in southern and northern Lebanon, and in the eastern Beka’a Valley.

This month’s blast, Beeri assessed, originated from a failure to carefully store the weapons. “A very likely scenario is a work accident stemming from improper storage,” he said.

“The idea that Hezbollah approves and knows about all of Hamas’s activity in Lebanon is, in my view, wrong. Hamas wants to compartmentalize its activities and keep Hezbollah out of the loop,” said Beeri.

When Hamas fired rockets at Israel in August, leading to Israeli retaliatory airstrikes,  “Hezbollah was presented with  fait accompli, and it was forced to be dragged into the escalation even though it did not want this,” he recalled. Hezbollah responded to the Israeli airstrikes by firing 19 rockets at Israel.

For Israel’s part, Jerusalem must adopt the view of Hamas a single unified organization that operates from Gaza and Lebanon, said Beeri. This means creating a new Israeli formula, according to which “Israel will choose to respond to a Hamas attack in any arena. If Hamas fires rockets from Gaza, Israel can strike a Hamas storage facility in Lebanon. If it attacks from Lebanon, the Israeli response can occur in Gaza. In my view, if Israel conducts these types of pinpoint strikes against Hamas in Lebanon, and declares that the target is only Hamas, Hezbollah will not respond. It might even understand that this suits its interests.”