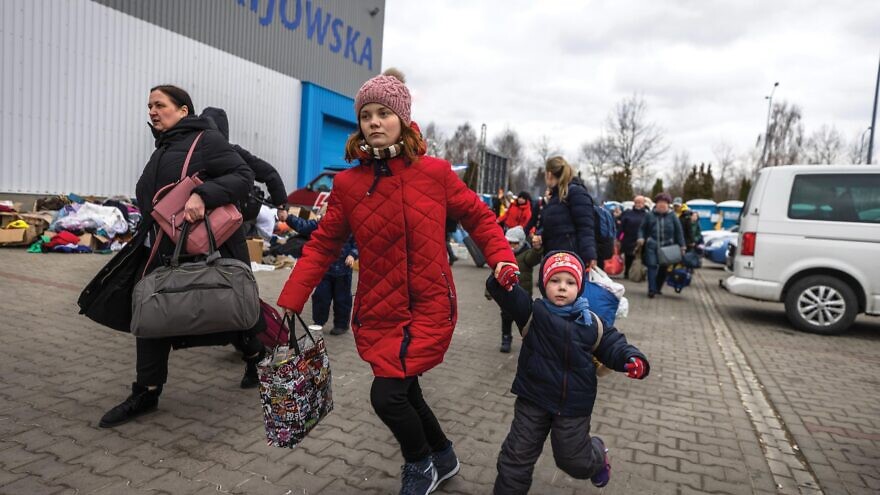 A mother and child who fled the Russian invasion of Ukraine at a temporary accommodation center in Korczowa, Poland. Photo by Olivier Fitoussi/Flash90.
Republish this article
1038 WORDS
Spread the word.
Help JNS grow!
Share now:

(December 18, 2022 / JNS) Jewish Ukrainian refugees throughout Europe trudged through the heaviness of the High Holidays. Now, Hanukkah brings the opportunity to let some much-needed lightness, and light, into their lives.

“Even when things look very dark, we believe that there can be light, and that when you’re lacking so much, it can actually last for longer than you think,” Rabbi Michael Schudrich, the chief rabbi of Poland, told JNS. “The real miracle isn’t that the oil menorah lasted for eight days. It’s that someone had the faith to light it even though he knew it wouldn’t be enough.”

Schudrich, together with a team of religious leaders and volunteers, have planned Hanukkah activities around Europe in hopes that the joy of Hanukkah will provide respite to these refugees taking shelter in their communities and provide a forum to allow less involved Jews to become engaged. Schudrich says the length of the holiday and the lack of religious restrictions will allow him to criss-cross Poland visiting up to two communities a day, including a stop Monday night at the palace of the president of Poland for a menorah-lighting ceremony.

Schudrich will be accompanied by Dr. Yuri Vedenyapin, a McGill University professor of Yiddish and a musician, who will perform holiday music for various audiences.

“I also do my Hanukkah quiz. We give out lots of silly prizes. One thing we’re doing is workshops, led by Ukrainians, on how to cook Ukrainian Jewish food for Hanukkah,” said Schudrich. “Part of their integration is to have them teach us something so that we’re not always in the position of doing something for them. It’s an absolutely brilliant idea from a young woman, a Polish convert to Judaism.”

Poland has absorbed more Ukrainian refugees than any other country and Schudrich said that many of the Jews have immigrated to Israel, moved on to other countries or, in some cases, returned to Ukraine. But those who have remained are under the care of organizations such as the Jewish Federations of North America (JFNA), the American Jewish Joint Distribution Committee (JDC) and the Jewish Agency for Israel (JAFI), which have helped fund assistance with housing, health coverage and other necessities.

Since Russia’s invasion began, JFNA has raised more than $78 million in support of Ukrainian refugees.

Schudrich said that given the sometimes horrific history of Jewish life in Poland, “it’s interesting to reflect that on the second day of the war [last February], we created a crisis management center. For hundreds of years, Polish Jews were the crisis.” 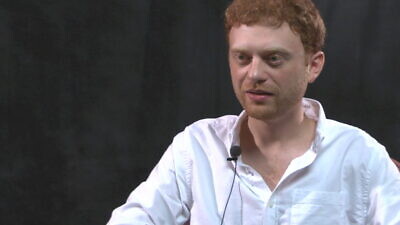 Vedenyapin is one of over 100 foreign volunteers serving the Jewish refugee communities, according to Hannah Miller, program director for the Global Volunteer Hub at Jewish Federations of North America. JFNA, JDC and JAFI created the hub in March, opening up a centralized application process for lay professionals with Ukrainian- and Russian-language skills to be efficiently vetted for placement in short-term roles in communities as needed.

“Volunteers have come from communities all across North America. The majority of people are professionals from fields like Jewish communal service, medicine, law, social work, psychology, but by and large, many of our volunteers are originally from Russia, Ukraine or elsewhere in the former Soviet Union,” said Miller. “Many of them said this feels like a full circle opportunity in many ways, this opportunity to give back.”

Vedenyapin, who was in Warsaw volunteering during the High Holidays, is one of many who are taking on multiple tours of duty. 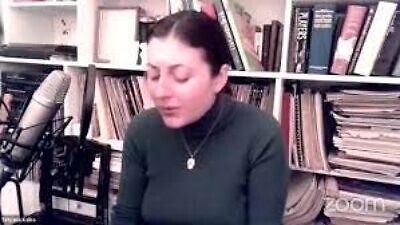 Rabbi Ilana Baird of San Francisco is returning to Europe after helping to lead a three-week summer youth camp outside the Warsaw Ghetto.

Miller said local communities have relayed to her that when the refugees hear that volunteers are willing to come all the way from North America, they’re moved.

“And then when they learned that those same people are willing to return, often within a short timeframe, it really makes them feel supported and connected to the larger global Jewish community. And I think that’s something is a wonderful benefit, but it’s something that I think has been an unexpected source of strength for a lot of these communities and it’s really touching,” said Miller.

Baird and her daughter are going to volunteer during Hanukkah in Barcelona, where JFNA and its partners just started sending volunteers.

Miller said the Baird family will participate in candle lightings and community celebrations, lead services, and offer workshops and “opportunities for the community to come together and learn from her about subjects connected to Hanukkah and how we can all find opportunities to spread light and increase light, particularly in an increasingly dark world.” That includes arts and crafts activities and children’s performances.

Miller said the community there is excited to have a Russian-speaking rabbi able to communicate with them in their own tongue. “There’s such an added joy that comes with that and such an added value that Rabbi Baird brings,” she said.

Mostly, though, the holiday will provide a built-in opportunity for a much-needed celebration for weary refugee communities throughout the continent.

“Hanukkah is something so many of us can easily and readily connect to regardless of what our circumstances are. Particularly right now as it gets dark so early, and it is so is already so cold in so many of these places, people are really looking for opportunities to find light and to feel warmth as a community,” said Miller.

That’s one of a number of themes that Schudrich says resonates with him.

“How often are we limited in trying to do something because we say we don’t have enough? One of the messages of Hanukkah is that even when we’re missing so much, we go ahead and we do what we can with whatever we have,” said Schudrich, who added that regardless of the refugees’ current status or their future plans, world Jewry has been provided an opportunity to help.

“Now that we succeeded in saving them from death, we need to give them life,” said Schudrich. “Wherever we’re going this Hanukkah, it’s very important that we include the Ukrainians, both that they should have a chance to celebrate, which is really important in such a situation, and the idea of integration. We are one community.”