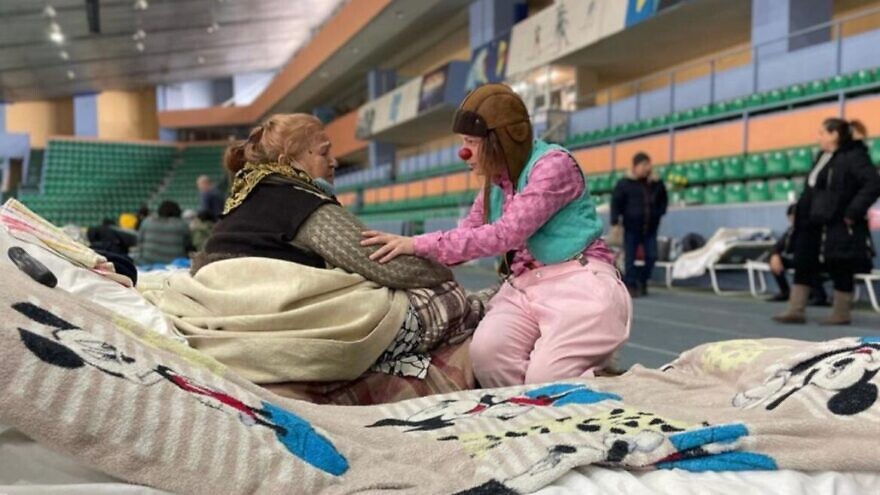 (March 22, 2022 / Israel21c) Reut Shifman-Tsoref, aka Zaza the Dream Doctor, saw a Ukrainian woman trying to lull her month-old child to sleep in a shelter packed with other refugees. Red nose in place, Zaza approached and looked the mother in the eye with a silent request for permission as she gently touched the baby’s leg.

Maintaining eye contact, Zaza continued stroking the infant until the mother felt safe. They don’t speak the same language, but they didn’t need to exchange a single word.

“Slowly the mom took her hands off and let me take the baby,” said Zaza. “I sang him songs that my grandmother taught me. I got him to sleep and then I started massaging the mother’s leg, too, to help her relax.”

Zaza was one of four Dream Doctors accompanying a weeklong Israeli medical mission that aided more than 2,000 refugees in seven shelters in Kishinev, Moldova, and at the Moldova-Ukraine border crossing. There are now three teams on the ground. 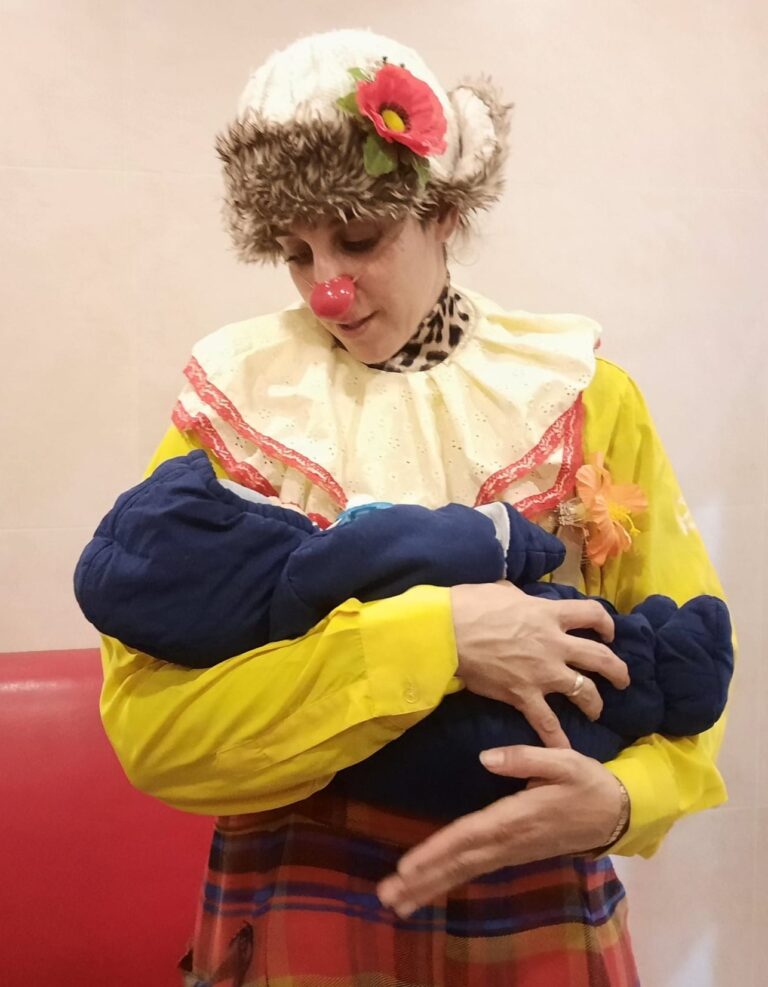 Reut Shifman-Tsoref, aka Zaza the Dream Doctor, holds an infant in a Moldovan shelter for Ukrainian refugees. Photo courtesy of Zaza.

Some 350,000 Ukrainian refugees—mainly women and children—have poured into Moldova since Russia’s invasion of Ukraine on Feb. 24. Their present situation is nightmarish and their future uncertain.

Dream Doctors Zaza, Zoya, Vitaly and Gad have tried to bring smiles to the faces of these weary, frightened displaced Ukrainians. 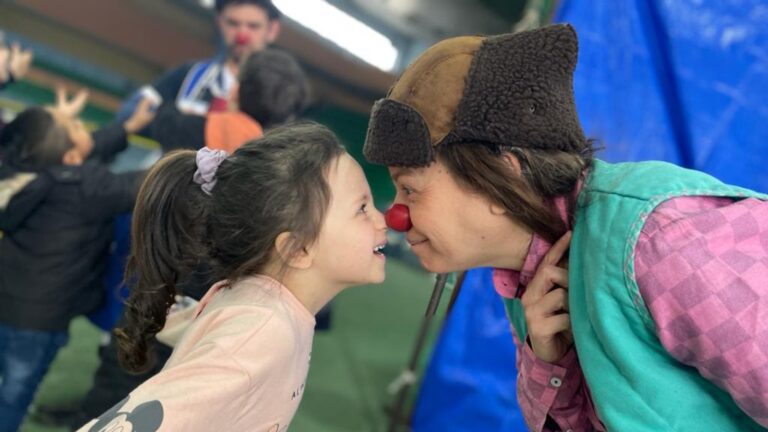 But therapeutic clowning is not just fun and games. It’s a serious, innovative approach to trauma intervention.

“People think we only joke with patients, but a lot of times they don’t need us to make them laugh. They need us to see them, to calm them,” said Zaza, who works at Jerusalem’s Shaare Zedek Medical Center. 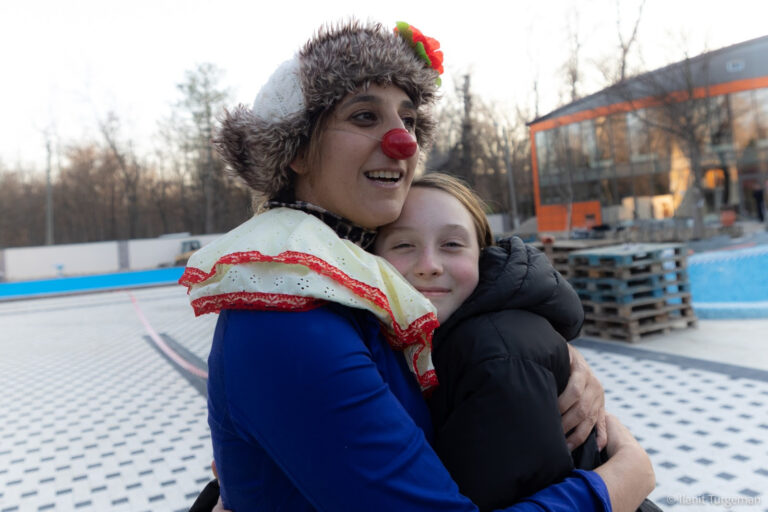 The next day when Zaza encountered the same mother with her newborn and her older children, they immediately ran over to her.

“Again I took the baby and got him to sleep. Holding him gave both his mother and me a moment of calm in the storm—it works both ways. It was such a difficult scene there, and a new baby symbolizes life and hope.”

“Our work here is to alleviate the worry and fear, if only for a few minutes. Those moments of joy bring back hope and sanity in this otherwise chaotic time,” explained Tsour Shriqui, CEO of Dream Doctors.

“In freezing temperatures, many Ukrainians are arriving without gloves and other warm items of clothing, with babies in their arms and nowhere to go. For a mother, watching her child laugh and play infuses the strength to push further for a better life.” 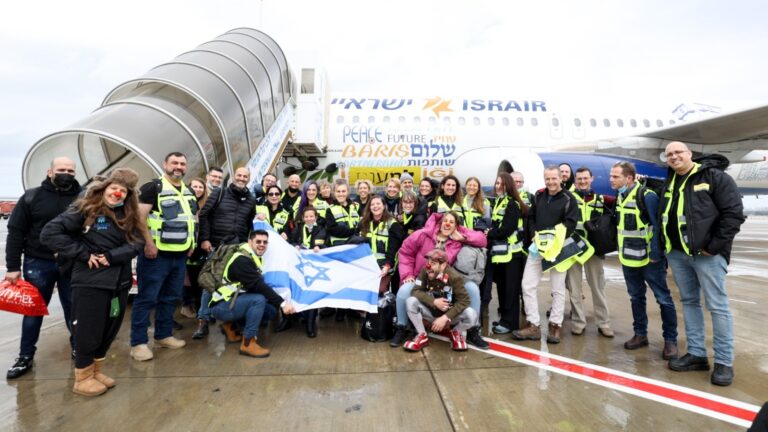 Dream Doctors are an integral part of medical teams in 34 hospitals across Israel. They also have extensive experience working in humanitarian relief missions worldwide, said Shriqui.

Their aid in foreign countries is often in collaboration the Israel Defense Forces, and this time in collaboration with Tel Aviv Sourasky Medical Center and charitable foundations including Lema’anam: Physicians for Holocaust Survivors.

The organization has traveled to disaster zones in Nepal, Haiti, Uganda, Ethiopia and Chad, among others, according to Shriqui.

“Dream Doctors were also in Houston after Hurricane Irma, Pittsburgh after the 2018 synagogue shooting, and in the Bahamas following the major earthquake in 2019. In 2018, Israel’s Foreign Ministry sponsored a unique training opportunity for Dream Doctors to coach a team of Yazidis from Iraq—a group that was severely victimized by [Islamic State]—in the art of medical clowning,” he said.

Some of the Dream Doctors in Moldova speak Ukrainian; Zaza does not. But 14 years with the organization have made her a master of nonverbal communication.

“Not speaking the language protects me a little, because I can’t hear the terrible stories,” she said. “I work just with my body and my mind.”

Many of the refugees were forced to leave husbands, sons and brothers in the war zone and travel for many hours, or even days.

“They are in emotional distress. But they don’t want pity—they want encouragement that they are strong and will be fine,” said Zaza. 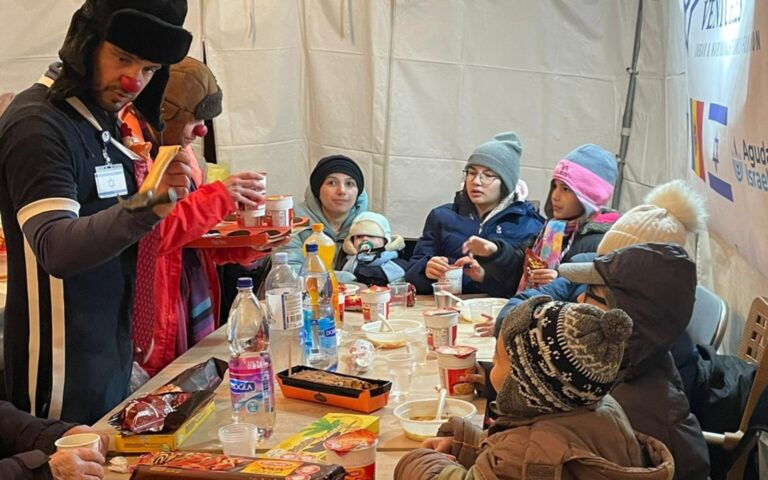 Despite her professional experience, however, Zaza said it nearly broke her to encounter elderly Ukrainians in the refugee shelters, among them Holocaust survivors.

In a poem she wrote in Hebrew on her Facebook page, Zaza described how she was reduced to tears seeing these elderly refugees “packing the rest of their lives in a suitcase, sitting and waiting for the next instruction. In their eyes there is pain and doom.” 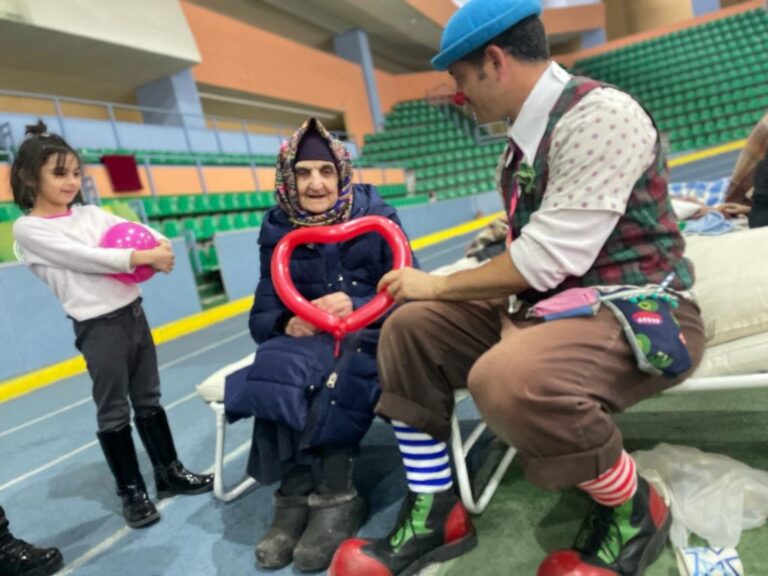 In this heart-wrenching place, she says, “We all work together as a team and support each other. “We try to give the refugees a small moment of calm and respite, to release endorphins, even to allow them to laugh.”