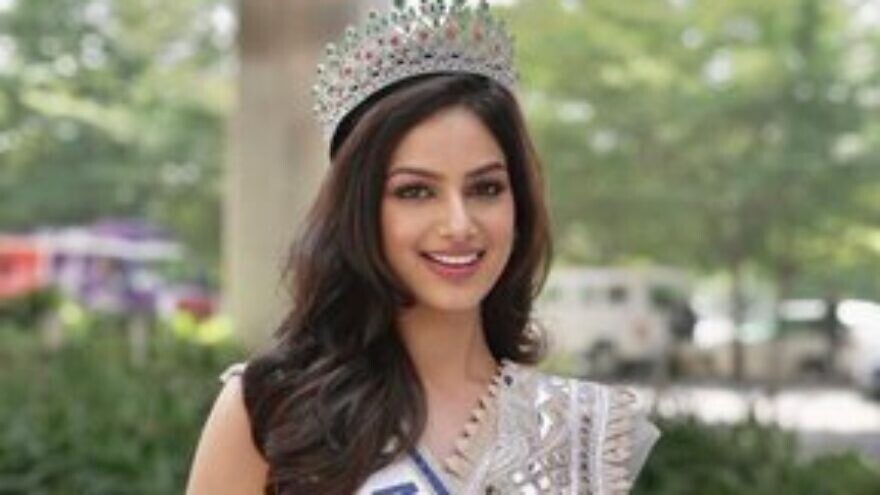 (December 13, 2021 / JNS) Harnaaz Sandhu of India was crowned the 70th “Miss Universe” in the resort town of Eilat on Sunday.

This is the first time the “Miss Universe” competition has been hosted by Israel. The event was broadcast live to over 600 million viewers in 172 countries in English, with a parallel broadcast in Spanish.

Sandhu was crowned by the previous winner, Andrea Meza of Mexico. Sandhu said she felt “overwhelmed because it’s been 21 years since India got Miss Universe crown and it’s happening right now,” AP reported. Miss Paraguay was the runner-up.

Israel had been on the shortlist of countries to host the competition “due to its rich history, beautiful landscapes, myriad of cultures and appeal as a global tourist destination,” said Paula M. Shugart, president of the Miss Universe Organization, which runs the competition, according to the report.

Israeli Tourism Minister Yoel Razvozov said in an Israeli government press statement in October that the Jewish state needs to present itself “as a vaccination nation that invites tourists to visit. The ‘Miss Universe’ pageant is, without doubt, an important and significant anchor of this plan.”

There had been some controversy over Israel hosting the pageant, with anti-Israel protesters condemning the move.

The South African government withdrew its support for its contestant because she refused to abide by a boycott against Israel. The contestant, Lalela Mswane, decided to compete despite pressure to withdraw, finishing as second runner-up.

The previous “Miss Universe” had spoken against the pressure on contestants to boycott the beauty pageant last month.

Despite politics and the pandemic, the contest went off without a hitch.

Only Malaysia, a Muslim country, decided not to send a representative, citing the COVID-19 pandemic as the reason, AP reported.