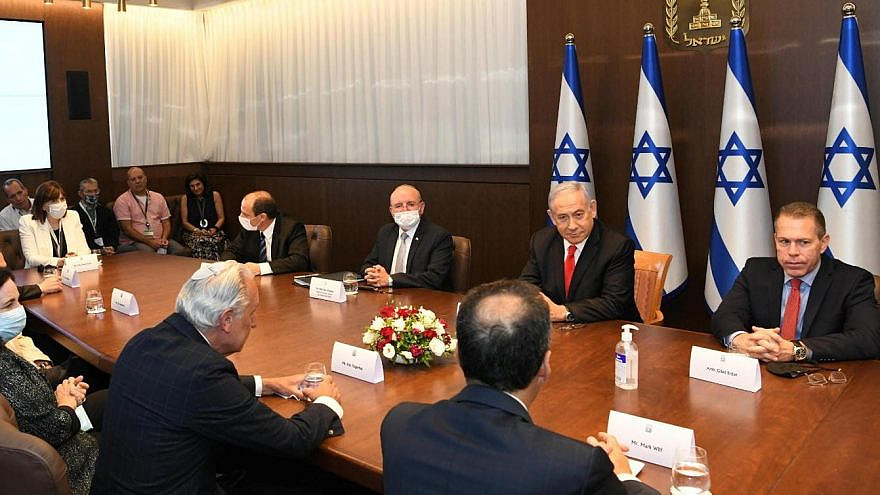 (June 3, 2021 / JNS) Following the announcement of a formation of a new coalition government in Israel on Wednesday, American Jewish leaders and organizations for the most part stopped short of offering any type of predictions and insight into how the agreement will change U.S.-Israel relations.

Instead, most celebrated the successful execution of democracy and some, the historic nature of the first time that an Arab Party’s has been included in a coalition government that is bent on incorporating a diverse spectrum of political views.

“While we await to see how the current situation materializes, we have complete confidence in Israel’s democracy, and JFNA has a longtime relationship with key leaders who may be coming into the new government,” Fingerhut said in a statement.

On Wednesday, Lapid and Bennett announced they forged an agreement on the next Israeli government. However, the proposed government still faces political pressure from Netanyahu and a confidence vote by the Knesset.

While official reaction from the Biden administration is likely being reserved for when the new government is sworn in, White House press secretary Jen Psaki, addressing a question about whether U.S. policy would change if Netanyahu was replaced, said Israel would remain a key strategic partner.

“Israel will remain an important strategic partner—one where you have an abiding security relationship—and that will continue,” she said.

AIPAC congratulated Bennett and Lapid for assembling a “broad and diverse” coalition that includes Zionist and Arab parties.

“Israel will remain an important strategic partner—one where you have an abiding security relationship.”

“The formation of this government just two weeks after Iranian-backed terrorists fired more than 4,300 rockets at innocent Israeli civilians further demonstrates the resilience of Israel’s democracy and its commitment to democratic values,” the statement read. “We look forward to further bolstering the bond between the U.S. and Israel as the two democracies work in close partnership to advance our shared interests and values.”

Democratic Majority for Israel board co-chairs Ann Lewis and Todd Richman remarked at the historic nature of the coalition in a joint statement.

“We note with pride that this government is not only expansive, including parties representing the right, left and center of Israeli politics, it is also inclusive, with Arabs, women and Jews of color holding key positions,” they said in the statement. “We congratulate Yair Lapid and his colleagues for achieving what many considered impossible: bringing together a broad spectrum of Israel’s political parties to form a new unity government.”

They said “when this government is sworn in, Israel will be the only country in the Middle East where Jews and Arabs govern together. With Mansour Abbas’ Ra’am Party joining the coalition, we are witnessing the beginning of a new chapter in Israel. Much work remains to be done in both countries; but with [U.S.] President [Joe] Biden and Democrats leading America, and a new government in Israel, this is a moment of hope and opportunity.”

‘Israel can undergo a healing process’

While reaction from the traditional, bipartisan pro-Israel organizations on the changes were muted, progressive organizations such as J Street and Americans for Peace Now (APN) could hardly contain their excitement at the prospect of Netanyahu’s 12-year rule is coming to an end, despite Bennett espousing similarly right-wing views.

“While we recognize that the proposed new prime minister, Naftali Bennett, is no more interested in the pursuit of peace than his predecessor Benjamin Netanyahu, we are pleased that Bennett will share power in his cabinet with progressive Israeli politicians,” a statement from APN read. “Under this new government, Israel can undergo a healing process. Such a healing process has the potential, perhaps even the promise, of shifting the public discourse in Israel to focus on crucial challenges facing Israel today, including the need to end the occupation and to pursue peace with the Palestinians.”

Jeremy Ben-Ami, president of J Street, wrote a long column on the organization’s website celebrating Netanyahu’s removal, saying that his fall from power is a “great relief” for those who care about democracy.

“It’s nearly impossible to overstate the damage Netanyahu and his party has done to Israeli democracy, civic institutions and the rule of law, the degree to which they have harmed Israel’s relationship to American Jews or the negative impact they have had in expanding settlements, undercutting hopes for a two-state solution and delegitimizing the entire concept of Israeli-Palestinian diplomacy and compromise.”

Ben-Ami said he recognized that Bennett was Netanyahu’s protégé and even held more pro-settlement, anti-Palestinian views when he positioned his party as a right-wing alternative to Netanyahu’s Likud, but because the new coalition’s survival depends on centrist, center-left and left wing parties, they will block any attempts, he said, to annex Palestinian land and promote measures to strengthen democracy and coexistence.

“While we have good reason to hope that it would be far more moderate and reasonable than its predecessor in many areas, we also cannot expect that it will act to end the intolerable, unjust and deteriorating status quo of endless occupation and recurring violence,” wrote Ben-Ami.

He said he believes that Congress and the Biden administration should pursue a reset in U.S.-Israel relations to strengthen progressives in Israel and confront human-rights violations and destructive measures not conducive to the peace process from both Israeli and Palestinian leaders.