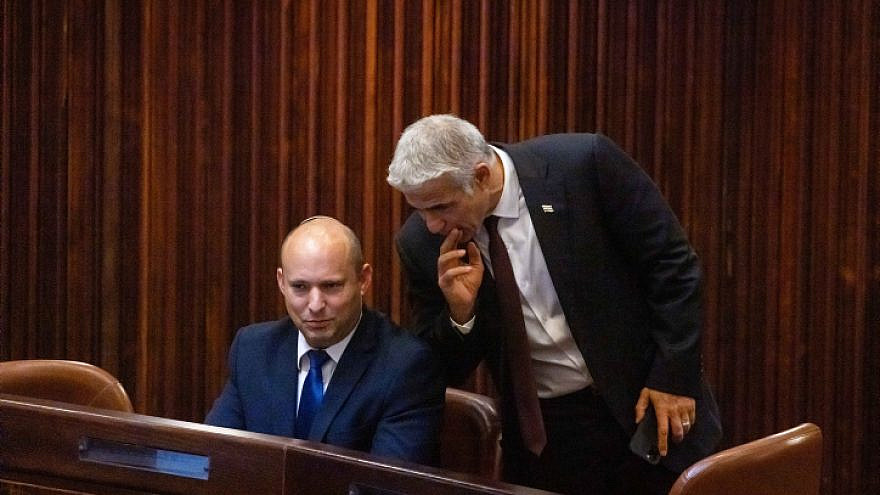 In an announcement on Twitter in Hebrew, Lapid wrote that the new government “will work in the service of all Israeli citizens, those who voted for it and those who did not. It will respect its opponents and do everything in its power to unite and connect all parts of Israeli society.”

Bennett and Lapid will head a government comprised of seven parties spanning the entire Israeli political spectrum from the left, center and right. It will also be supported by the Ra’am Party, marking the first time that an Arab party has played a role in forming a government. The Jewish parties in the new coalition will include the centrist Yesh Atid and Blue and White, the right-wing Yisrael Beytenu, Yamina and New Hope, while also including the left-wing Labor and Meretz.

Despite the announcement by Lapid just minutes before his mandate was set to expire, he still faces a number of hurdles. The declaration must be approved by Rivlin and then a vote of confidence in the new government must be held in the Knesset in the coming weeks. Plus, the government is expected to garner a bare majority of votes in the Knesset—likely 61 out of 120—making just one defection needed to collapse the coalition.

In a statement, Rivlin’s office congratulated those involved in the agreement and said that the “Knesset will convene as soon as possible to ratify the government, as required.”

Netanyahu, who failed in his first attempt to form a government earlier this spring, will most likely continue to try to press lawmakers in Yamina and the New Hope Party to defect from the government.

If the new government is sworn in, it will end Netanyahu’s term as the country’s longest-serving prime minister. He has sat at the nation’s helm continuously since 2009 and served for three years in the late 1990s.

Netanyahu, who is on trial for charges of corruption and bribery, has indicated that his Likud Party will go into opposition.