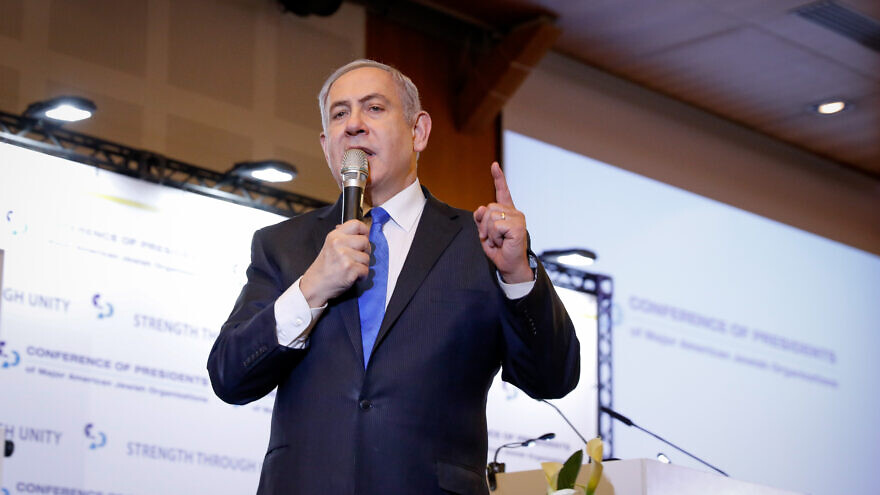 (February 16, 2020 / JNS) Israeli Prime Minister Benjamin Netanyahu told a delegation of American Jewish leaders that the “accumulation of power is creating a new approach for Israel” in its relations throughout the Middle East, and particularly with Palestinians.

Speaking to the Conference of Presidents of Major American Jewish Organizations, an umbrella of 53 diverse religious and political Jewish groups that works to build consensus among the largest Jewish Diaspora community, the prime minister explained mechanics of the newly released “Peace to Prosperity” Mideast plan, as well as changing relations between Israel and its Muslim nations.

Calling the Trump plan a “breakthrough,” Netanyahu noted that the United States is set to “recognize Israel’s sovereignty over the Jordan Valley, the northern Dead Sea and all the communities, the Jewish communities, large and small, in Judea and Samaria” upon the completion of a “mapping process” and regardless of Palestinian acceptance of the plan.

Earlier this week, both the United States and Israel assigned three members to a six-member bilateral committee that will convert the conceptual map presented by the Trump administration into a detailed technical map to define precise borders for the immediate application of Israeli sovereignty in key disputed territories.

“We’re working together to finish this [mapping process] as fast as possible,” said Netanyahu.

He said that as a prerequisite, Palestinians will need to “stop paying terrorists and to withdraw all their claims against Israel and the ICC in The Hague.”

Netanyahu then said that in order to complete the negotiations, Palestinians would need to “recognize Israel as the Jewish state; recognize the united Jerusalem as Israel’s capital; recognize Israel as the power responsible for security everywhere West of the Jordan; recognize our sovereignty in the places that I mentioned; and also adopt a constitution, a democratic constitution that assures democratic rights, free speech, free elections, freedom of religion and a few other things.”

“This is a short list. It’s longer,” Netanyahu said, adding that “they also have to dismantle, disarm Hamas and demilitarize Gaza.”

He noted that “two powers,” the United States and Israel would jointly determine whether Palestinians had fulfilled the conditions.

He added that “the change that we’re witnessing today is part of the reemergence of Israel is a power among the nations.”

‘Intimate ties’ with the Arab world

Relating to Israel’s relationships with other Muslim nations in the Middle East and Africa, Netanyahu said he has “been developing context with the Arab and Muslim countries, and I can tell you this, there are scarcely one, two, three Muslim or Arab countries around the world that we don’t have intimate ties.”

Netanyahu noted that following a recent meeting with the president of Sudan, “the first Israeli airplane passed yesterday over the skies of Sudan” en route to South America.

“I am just telling you what is above the surface,” said Netanyahu, comparing Israel’s relations with Muslims countries to an iceberg, in which most of the contacts are taking place under the radar.

Prior to arriving in Israel, nearly 30 members of the American delegation visited Saudi Arabia, where they met with Saudi leaders to discuss improving ties between the Jewish community and the Sunni Muslim world. Citing the need to remain discreet, the leaders have kept the contents of the meetings off the record.

“I’m glad we have a solid partner with United States, and I hope that other countries will join and guess what, other countries in the Middle East are joining—many more than you think. So that is our task. To ensure the future of Israel, to ensure the strength of Israel, not merely the survival of the Jewish state, but the thriving of the Jewish state. All of that is happening,” he said.

“And I know that one of the biggest resources that we’ve had over the years, I could personally report to you because I’ve been around you a long time, is the Conference of Presidents,” he added. “And I have to ask you to applaud one man who has been doing that all along, Malcolm Hoenlein.”

Hoenlein, who has led the Conference for the past 35 years, is handing the reins to Daroff, though will remain in a part-time capacity.