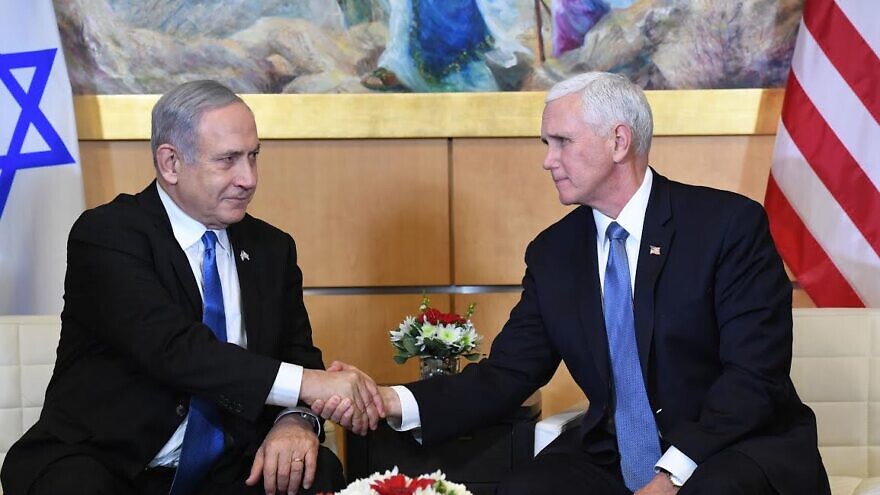 (January 23, 2020 / JNS) Israeli Prime Minister Benjamin Netanyahu, and Blue and White Party and opposition leader Benny Gantz are scheduled to visit the White House next week for a development on the highly anticipated Mideast peace plan, which has been called the “deal of the century,” announced U.S. Vice President Mike Pence on Thursday while meeting with Netanyahu.

Pence said on the table to be discussed are “regional issues, as well as the prospect of peace here in the Holy Land.”

U.S. President Donald Trump further confirmed the visit on Twitter, saying he “looks forward to welcoming” the two Israeli party leaders. But he said that “reports about details and timing of our closely held peace plan are purely speculative.”

The United States looks forward to welcoming Prime Minister @Netanyahu & Blue & White Chairman @Gantzbe to the @WhiteHouse next week. Reports about details and timing of our closely held peace plan are purely speculative.

The proposal, which would reportedly be released before the Israeli elections on March 2, is purportedly “the most generous deal ever” for Israel, which could include Israeli sovereignty over the Jordan Valley, and all settlements in Judea and Samaria, in addition to a demilitarized Palestinian state, according to Israel’s Channel 12.

White House spokesperson Hogan Gidley told reporters on Thursday that he had no information “at this time.”

The Trump administration opposes Israeli annexation of the Jordan Valley ahead of the peace plan’s release, reported Israel’s Channel 13.

The Palestinian Authority, which has been officially boycotting the Trump administration, is expected to reject Trump’s latest peace plan even before conversations begin.

‘It won’t change the Palestinian position’

The long-awaited plan has been delayed numerous times due to the Israeli elections and other reasons. The economic component was released last June at a conference in Bahrain.

JNS previously reported that it would include recognizing a Palestinian state with its capital in remote parts of eastern Jerusalem. The Palestinians have claimed that sector of the city as the capital of a future state, a position supported by most countries. But Israel considers the entire city, including its eastern part, to be the Jewish state’s undivided capital.

Aaron David Miller, who advised on Mideast issues at the U.S. State Department for 25 years and serves a senior fellow at the Carnegie Endowment for International Peace, told JNS there has been “no precedent” for a sitting prime minister and opposition leader meeting with a U.S. president, and that the reported trip indicates a concrete development is in store.

He said that two major party leaders don’t “come to Washington just for a conversation,” which poses questions as to why an initiative would be released a month before the third round of Israeli elections.

“Whatever the U.S. wants, it’s highly unlikely” that the Trump administration seeks for Netanyahu and Gantz to form a unity government, said Miller, “given Knesset arithmetic and Netanyahu’s indictment.”

“If this were a plan that would actually bring us closer to launching or relaunching negotiations between Israelis and Palestinians, an argument could be made by Gantz and Netanyahu, and the Trump administration, that what is best right now with this historic opportunity at hand is to form a national unity government,” added Miller. “That’s not what’s going on here. You don’t have a Palestinian interlocutor, and you’re unlikely to have one.”

Yet if the United States were to be able to convince the Gulf states to have a meeting with Netanyahu as part of the peace plan, “that could change the political equation,” said Miller, adding that “it won’t change the Palestinian position.”