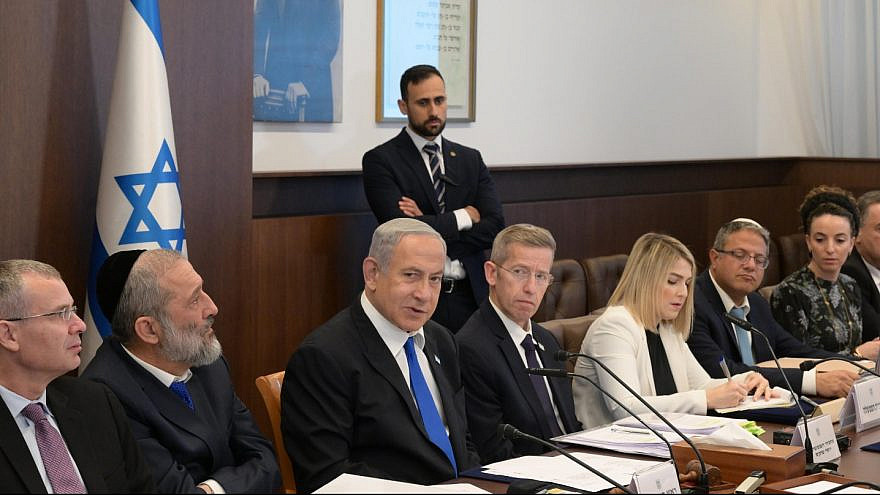 (January 15, 2023 / JNS) Israeli Prime Minister Benjamin Netanyahu on Sunday defended his government’s judicial reform plan and called on opposition leaders to stop threatening “civil war” and speaking of “the destruction of the state.”

Netanyahu began his remarks to Sunday’s Security Cabinet meeting by noting that in November “there was a huge demonstration, the mother of all demonstrations. Millions of people went into the streets in order to vote in the elections. One of the main topics that they voted on was reforming the judicial system.

“In recent days, I have heard about an attempt to claim that the public did not know what it was voting for. Then here is a quote, one of many, from me and my colleagues during the election campaign. This is my quote: ‘We will make the necessary changes in the judicial system, prudently and responsibly. We are going to change the system, to save it and not destroy it.'”

Words to this effect had been uttered in the past by both right- and left-wing governments, he continued, “and nobody thought then that it was the ‘end of democracy.'”

The true aim of the reforms is to “restore the balance between the authorities that existed in Israel for 50 years, and which is maintained today in all western democracies,” he continued.

“I must say that when we were in the opposition, we did not call for civil war and did not speak about the destruction of the state, even when the government made decisions that we vociferously opposed. I expect the leaders of the opposition to do the same,” he added.

Netanyahu urged opposition leaders to instead engage in “in-depth and serious dialogue” on the proposals in the Knesset and its associated committees, while urging the public to not “be swept away by inflammatory slogans about civil war and the destruction of the state.”

Netanyahu’s comments came after an estimated 80,000 to 100,000 Israelis took to the streets on Saturday evening for demonstrations in Tel Aviv, Haifa and Jerusalem against the proposed reforms.

Justice Minister Yariv Levin on Wednesday published a draft of his judicial reform bill. The proposed legislation, presented as an amendment to Basic Law: The Judiciary, has not yet been put before the Knesset.

The bill includes an “override clause” that would enable the Knesset, with an absolute majority of 61 members, to reverse Supreme Court decisions to overturn laws. It would also change the way judges are appointed, giving the majority on the selection committee to elected officials. In a related change, the bill calls for Supreme Court judges to be appointed in a public hearing.

Third, the bill eliminates the legal justification of “lack of reasonableness,” which critics argue is vague and has been used by the court to mean whatever it likes.

Israeli President Isaac Herzog said on Sunday that “profound” disagreement over the government’s judicial reform plan was tearing the country apart, and vowed to work towards averting a constitutional crisis.

“We are in the grips of a profound disagreement that is tearing our nation apart. This conflict worries me deeply, as it worries many across Israel and the Diaspora. The foundations of Israeli democracy, including the justice system, are sacred and we must strictly safeguard them, even at a time of fundamental arguments and debates about the relationship between the different branches of government,” Herzog said in a statement.

“I respect everyone who has been arguing and getting involved, protesting and demonstrating, and I appreciate the public engagement in this important debate. I respect the criticism towards me, but I am now focused on two critical roles that I believe I bear as president at this hour: averting a historic constitutional crisis and stopping the continued rift within our nation,” he continued.

Herzog added that he has been working “full time” to create “wide-reaching, attentive and respectful discussion and dialogue” between the relevant parties.

“I hope [this] will yield results. I humbly admit that I am not certain of this endeavor’s success,” he said. “There is still a long way to go and significant gaps remain.”