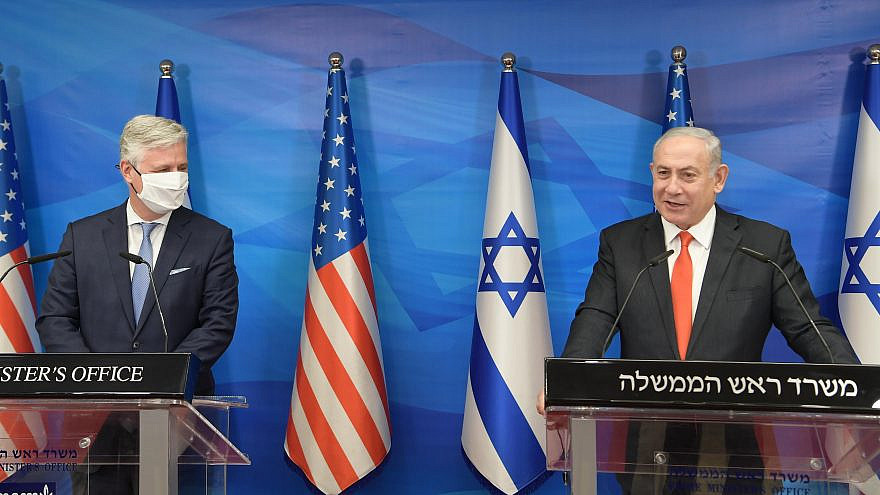 (December 14, 2020 / JNS) Israeli Prime Minister Benjamin Netanyahu met on Sunday in Jerusalem with U.S. National Security Advisor Robert O’Brien, who was in the city for a series of meetings with Israeli officials to discuss regional and security issues, as well as the Abraham Accords peace agreements with the United Arab Emirates and Bahrain.

In addition to Netanyahu, O’Brien met with his Israeli counterpart, Meir Ben-Shabbat, to whom he awarded the U.S. Department of Defense Medal for Distinguished Public Service, the highest honorary award given to non-U.S. citizens.

In his opening remarks, Netanyahu warmly welcomed O’Brien back to Jerusalem and thanked him for his “extraordinary” cooperation with Ben-Shabbat.

“Meir is shy, but I’m not shy about speaking about the great things he’s done with you, because working together, the two of you have helped produce incredible results for both our countries, and Meir Ben-Shabbat well deserves the American Department of Defense’s medal for Distinguished Public Service that you’ve just bestowed upon him,” said Netanyahu.

The Israeli premier went on to state that under the Trump administration, the U.S.-Israel relationship had grown closer than ever before, and the two countries had made “amazing progress” in various endeavors, prominent among them the peace agreements with states in the region.

“The Abraham Accords have brought about historic breakthroughs for peace with four Arab countries: the United Arab Emirates, Bahrain, Sudan and now with Morocco. This is creating enormous excitement in Israel. Israelis now are faced with a great dilemma. Where to go? Dubai or Morocco? Abu Dhabi or Morocco? I’m sure we’ll resolve that one. We’ll go to both,” he said.

The UAE and Bahrain signed the Abraham Accords with Israel at the White House in September; Sudan followed in October; and on Dec. 10, U.S. President Donald Trump announced that Morocco has also agreed to normalize relations with the Jewish state.

Such breakthroughs would not have been possible without both Trump and his team, said Netanyahu.

Noting that just two months had elapsed since his last visit with Netanyahu in Jerusalem, O’Brien said it was “wonderful” that such peace deals were becoming “a regular event.”

“When you think about the accomplishments, it’s amazing. Just days ago, on the eve of Hanukkah, we achieved an agreement between Israel and Morocco. Diplomatic relations between these two countries, [which] are tied together through familial and ancestral bonds, have now been restored. Normalized relations opens the door to cooperation in a large range of areas, from trade to tourism, and those will lead to economic prosperity for both Morocco and for Israel. What a wonderful thing,” said O’Brien.

In addition to the Abraham Accords, said Netanyahu, the Trump administration had proposed the first “truly realistic” plan for Israeli-Palestinian peace. Trump’s “Peace to Prosperity” plan, announced in January, was the first plan to take seriously and address Israel’s national and security interests, he said. “That’s why I think down the line it will be the only plan that will be implemented.”

Turning to Iran, Netanyahu praised Trump’s “maximum pressure” campaign, saying the fact that it was also “widely supported” across the Middle East was noteworthy.

“Both Israelis and Arabs praised President Trump when he pulled out of the failed Iran nuclear agreement, when he reimposed and beefed up tough sanctions on Iran, when he took out the Iranian arch-terrorist Qassem Soleimani. When Israelis and Arabs agree on so many things, it makes sense for the world to pay attention. After all, we live in this region. We know something about it,” he said.

“I say world peace because today, the Islamic Republic of Iran is still … a nasty neighborhood bully. But, if unchecked, tomorrow Iran will arm itself with nuclear-tipped ICBMs that can target Europe and America, and it will become a global bully, which will endanger everyone. All this must be prevented and all this can be prevented,” he said.

‘The future for the entire region is now bright’

O’Brien said that for now, the Iranian mullahs have been “contained.”

“What’s critical is their revenue has been reduced to the lowest levels in history by the largest economic pressure campaign ever instituted since the end of the Cold War,” he said.

The U.S. national security advisor concluded his remarks on an optimistic note, saying that “the future for Israel and the entire region is now bright.”

The United States, he said, believes other Arab and Muslim countries will follow the example set by the UAE, Bahrain, Sudan and Morocco and normalize their ties with Israel.

“A new era in the Middle East has truly begun,” he said.

“Nations in this ancient region are putting aside old ideas and old grievances, and they’re embracing a better future … based on shared goals and shared interests. So the United States looks forward to continuing its partnership with Israel and our partners to translate these agreements into tangible, sustainable gains towards peace. The momentum is now on the side of the peacemakers. May God bless Israel, and may God bless the United States of America.”