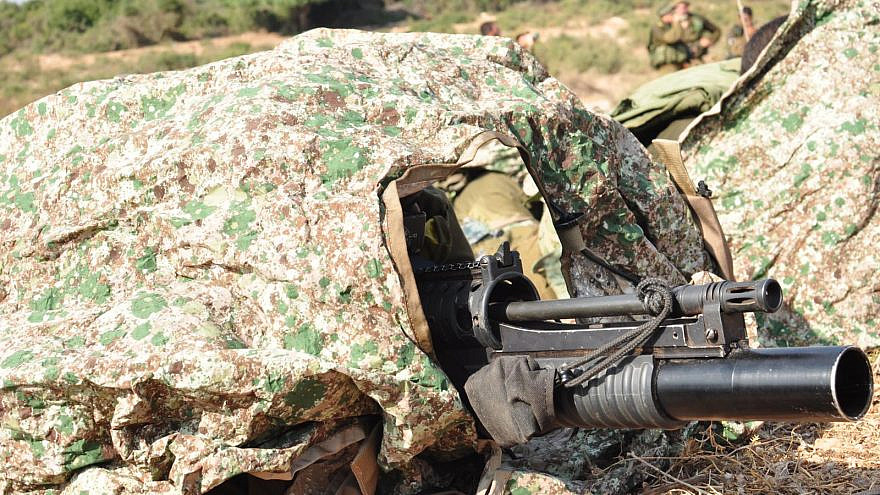 “Kit 300” was developed by Polaris Solutions using special Thermal Visual Concealment (TVC) material. This led to the development of a lightweight camouflage sheet that can also double up as a stretcher. Credit: Israeli Ministry of Defense.
Republish this article
627 WORDS
Spread the word.
Help JNS grow!
Share now:

(January 18, 2021 / JNS) A new camouflage kit developed by an Israeli survivability company in cooperation with the Defense Ministry can lead to a “revolution in the battlefield,” as it enables frontline soldiers to operate in the vicinity of enemy forces yet remain out of view, an Israeli defense official has said.

“Kit 300” was developed by Polaris Solutions using special Thermal Visual Concealment (TVC) material. This led to the development of a lightweight camouflage sheet that can also double up as a stretcher, Gal Harari, head of the Defense Ministry’s Detectors and Imaging Branch, in the Directorate of Defense Research and Development, stated.

The product successfully passed a pilot program involving Israel Defense Forces special forces. An army infantry brigade was then equipped with it. The IDF must now decide how many additional products it will procure.

Harari explained that while Israel’s adversaries have improved their ability to spot IDF soldiers using advanced cameras, including thermal cameras and night-vision equipment, until now there has not been a very large investment in camouflage in Israel.

In the Second Lebanon War of 2006, IDF field units experienced this challenge firsthand, noted Harari. “One of the personal lessons from combat soldiers on the ground is that this requires a solution,” he said, describing the motivation of Polaris Solutions to develop the new product. The company is made up of IDF personnel who took part in such battles.

“Their drive came from a painful place—field soldiers who understood that we can come up with better solutions than the existing equipment. They wanted to develop a solution for soldiers in the field so that they will not be so exposed,” said Harari.

The material’s nominal weight also means that units can “walk with it without sweating too much,” he added. “It lets soldiers conduct ambushes in the field and remain hidden.”

‘A highly unique and productive cooperation’

The cooperation between the Defense Ministry and Polaris Solutions represents an Israeli civilian-military partnership in which the Defense Ministry’s research and defense body responded quickly and attentively to a new idea from a small company located in a kibbutz.

Polaris Solutions first began its operations out of an agricultural warehouse. Today, it has turned into a company with its own production and supply capabilities.

“This is a highly unique and productive cooperation,” said Harari.

The traditional stretchers still in common use among infantry soldiers date back decades and have not changed much, said Harari, describing them as complex to operate and heavy. “The company said, ‘we can make camouflage material that is strong and that can also be used as a stretcher,’ ” he recalled.

The technological challenge came in finding the right material that lets soldiers blend in with nature and that blocks out their thermal output. The company developed ultra-strong micro-fibers blended with metals and polymers, creating true mechanical strength.

Every soldier equipped with the sheet also has a lightweight stretcher, allowing for rapid evacuation of the injured from the field.

The rainproof material also means that units can conduct an ambush or set up a surveillance point by joining the sheets together to resemble rocks that blend into the environment.

“Someone staring at them with binoculars from afar will not see soldiers,” said Harari. “One does not have to be an expert in camouflage to use it. Soldiers undergo a workshop lasting less than a day to learn how to use this advanced camouflage product.”

Each side of the material receives a different color scheme to match the conditions in Israel’s southern and northern arenas.

After years of inadequate investment, he said, “Today, we are changing this equation after our enemies equipped themselves with highly advanced capabilities.”