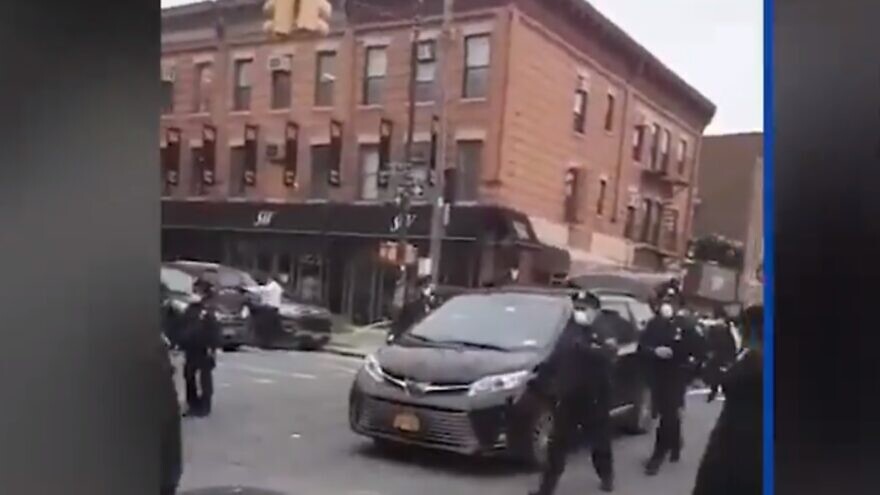 (May 4, 2020 / JNS) The New York City Police Department interrupted another crowded Jewish funeral procession on Thursday in Brooklyn, N.Y., the second one in a week, in an effort to crack down on social-distancing violators amid the coronavirus pandemic.

New York’s shelter-in-place order prohibits gatherings of more than 10 people, but a video from the scene shows dozens of people attending the afternoon funeral procession for a rabbi and Holocaust survivor in the Borough Park neighborhood.

An NYPD source told Yeshiva World News that police were told that a vehicle carrying a coffin would stop in front of a home in Borough Park so the family of the deceased could recite mourning prayers in front of the vehicle. Sgt. Jessica McRorie said the NYPD was present “to ensure social-distancing rules were being followed.”

Police only allowed family on the block; however, a large crowd gathered to watch, forcing officers to order the van carrying the casket to leave the scene. That led to altercations caught on video between the Chassidic onlookers and police officers.

Footage shows officers in protective masks chasing the van that carried the body, with the officers heard shouting at dozens of people marching behind it to get out of the street and onto the sidewalk.

A 17-year-old boy was taken into custody, but released shortly after and issued a summons for disorderly conduct after he was accused of pushing a police official, according to a police spokeswoman.

The confrontation came two days after New York Mayor Bill de Blasio upset many with a series of tweets about the Jewish community after hundreds gathered in the Williamsburg neighborhood in Brooklyn for the funeral of another rabbi. The synagogue that held the gathering later apologized for the crowd.