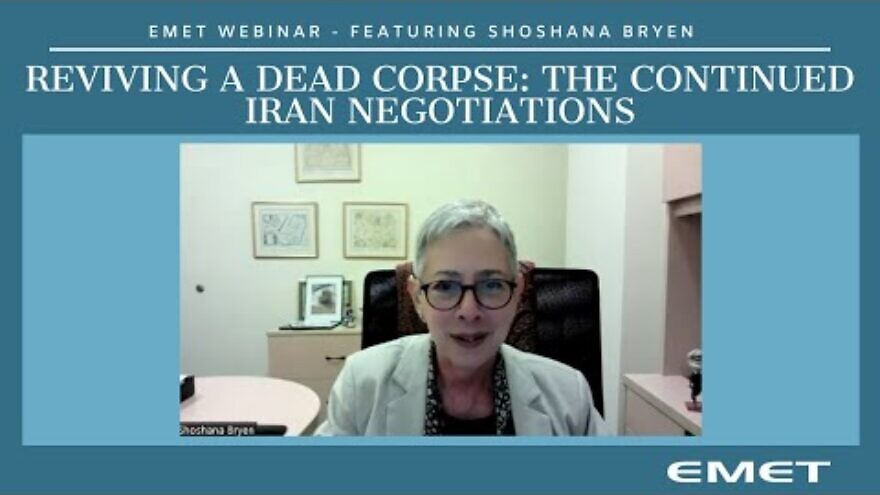 (August 28, 2022 / JNS) Why are negotiations between the United States and Iran still ongoing considering how the ayatollahs’ regime has behaved, and continues to behave, toward America and its allies?

And if an agreement between the parties is indeed reached, what will the consequences be for the Middle East and the world?

In a new webinar organized by EMET (The Endowment for Middle East Truth), analyst Shoshana Bryen, director of the Jewish Policy Center, addresses several key questions related to the efforts to revive the 2015 Joint Comprehensive Plan of Action.

Why the United States is pursuing the Iran deal

According to Bryen, there are only two possible reasons for the Biden administration to continue to pursue a deal. “Either they actually believe that negotiations will work,” or “they simply want out of the mess,” as was the case with Afghanistan, she says.

However, she argues that decades of attempts to reach a solution to the Israeli-Palestinian question through negotiations have proven the first assumption wrong.

“Robert Malley, our chief Iran negotiator, about a month ago when he was pessimistic, said that it could not be done,” says Bryen. “You can’t revive a dead horse.”

She added that the Iran deal has additional detrimental effects.

“It’s a great diversion,” Bryen says, explaining that it allows Tehran to have more resources and coverage to support its proxies in the region, from Hezbollah in Lebanon to the Houthis in Yemen.

Did you know? The Iran deal was not ratified by the Senate

Another unacceptable element of the 2015 agreement according to the analyst was that the Obama administration did not treat the deal as a treaty and therefore did not bring it before the Senate to be ratified, as the Constitution requires.

“The Obama administration tried to say that the JCPOA was not a treaty, although it had all the functions of a treaty since it did commit the United States government to do things on behalf of the American people,” Bryen explains. “Obama subverted the Constitution.”