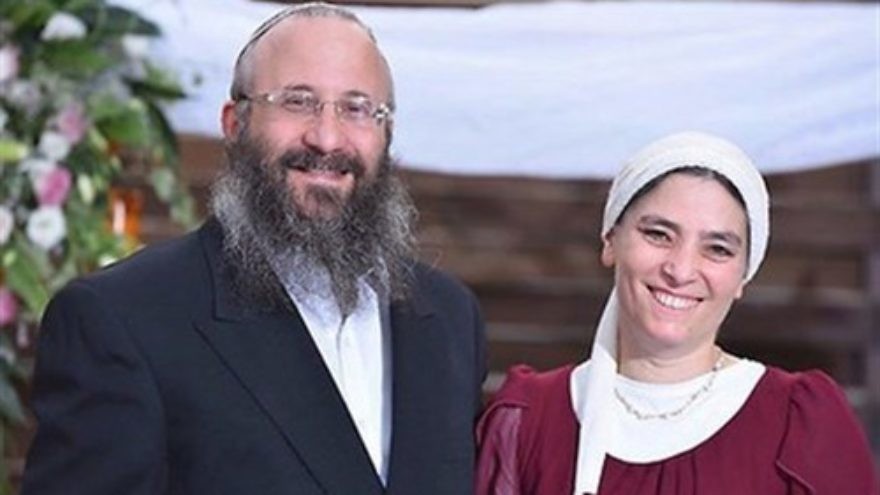 (August 9, 2016 / JNS) A Palestinian who offered assistance at the scene of a July 1 terrorist attack in Israel, in which a rabbi was killed, has been dismissed from his public service job in the Palestinian Authority.

J., whose full name has not been made public, was the first of two Palestinians who provided assistance to Rabbi Michael Mark, who was shot by Palestinian terrorists while driving on Route 60, an intercity road across Israel, Judea and Samaria between Nazareth in the North and Beersheba in the South. Mark’s wife and one of his daughters were wounded in the attack. The Palestinian man helped Mark’s children, who were in the car during the attack, escape the overturned vehicle.

“We saw an overturned car — I stopped my car on the right [side of the road] and we got out. I tried to open the door, but the car was completely locked. All the doors were locked in the front and the back,” J. told Channel 2 in a July interview.

“I saw two children inside screaming and asking me to help them. I put out my hand and for two minutes, I tried to open the door to get to the children who were suffocating in the car. I think that if they stayed there a little while longer, those children would have suffocated in the car. Out of the shock she felt, the young daughter spontaneously grabbed me and jumped onto me. I immediately put my hand on her head and spoke to her in Hebrew, of course. I told her, ‘Don’t be afraid, don’t be afraid, I will help you. Don’t worry,’” he said.

“I did what I did out of humanity. These are children. There were children inside. There were people inside. I didn’t hesitate at all,” he added.

Another Palestinian man, Dr. Ali Abu Sherech from the Hebron area, also stopped at the scene within minutes of the attack and provided medical care to the family. Both men initially believed they were at the scene of a vehicular accident, and did not immediately realize it was a terror attack until security forces arrived.

“As a doctor, I am committed to saving lives, whether Jewish Muslim or Christian” Sherech said. “The mother and father suffered the most serious injuries. I examined the father, and he had already died. The mother was suffocating because of the seat belt that had wrapped around her neck, and she suffered gunshot wounds to her upper body.”

“The girl was in shock, and when I examined her, I realized that she was not seriously injured. I tried to explain to her in English that we wanted to help them, but she did not understand me. My brother spoke to her gently in Hebrew and explained to her that I am a doctor and that we would help them. We told her that her mother and father would be OK and that medical help would arrive soon and they would be taken to the hospital, though I knew the father was no longer alive. I didn’t want her to panic even more,” the Palestinian doctor said.

The Palestinian Authority has declined to comment on its decision to dismiss J. from his public service job.

A relative of J.’s told Israel Hayom that “since it became clear that he was the first to arrive at the scene of the attack and that he helped the victims, he and his family have been subjected to a smear campaign and received threats.”

“He is not scared, but it bothers him that he and his family have become outcasts since the event. More than anything, it hurts him that he was fired from his job in the public sector of the Palestinian Authority. They told him that he was let go because of budget cuts, but he was the only one who was fired a few days after the incident,” the relative said, stressing that J. does not regret his decision to help the Mark family.

“Even in a war, you don’t hurt a wounded enemy and you provide assistance, and that is what he did,” he said. “If he could go back, he would do the exact same thing.”

Yochai Damari, the head of the Har Hebron Regional Council in Judea, wrote in a Facebook post, “J. arrived on the scene seconds after the attack and he worked to free the children from the vehicle and to release the seat belt that was strangling the mother, Havi. Afterward, he even watched over the children in his own car and saw to it that nobody hurt them or kidnapped them — this despite the fact that people in the dozens of cars that passed by threatened him and demanded that he refuse to help Jews.”

Damari said that he had met with J., who had asked him to help arrange an Israeli work permit for him. Following the meeting, Damari approached Israeli Defense Minister Avigdor Liberman asking for help.

“In situations like these, it is our duty as a Jewish nation to show gratitude toward people who behave like upstanding human beings,” Damari also wrote on Facebook.

Israeli Justice Minister Ayelet Shaked also commented on the issue during a visit to the Har Hebron area.

“I understand that the Palestinian Authority fired the person who helped the Mark family,” she said. “This is the behavior of [an organization] that encourages terrorism. I will demand of the U.N. secretary-general to take action to stop this abuse of someone whose only sin was to help injured Jews,” she said.

Mark’s wife, Havi, who was seriously injured in the attack, underwent surgery on July 8 at the Hadassah Ein Kerem Hospital in Jerusalem and is reported to be in good condition.

“The surgery was complex and related to the injuries from the attack. It went well and Havi is now awake and communicating with all of us,” Neurosurgery Department Head Dr. Yigal Shoshann said.

Mark’s 17-year-old daughter, Orit, said in July that her father “was a sacred man.”

“I am sure that for anyone who wants something, my dad will sort it out from above, because my dad is now healing my mom. My mom is healing in a way that no one would believe, and we are seeing miracles. Our mother, who almost died, is a courageous mother.” she said.

The Mark family has expressed gratitude to the public for the support and prayers it received.