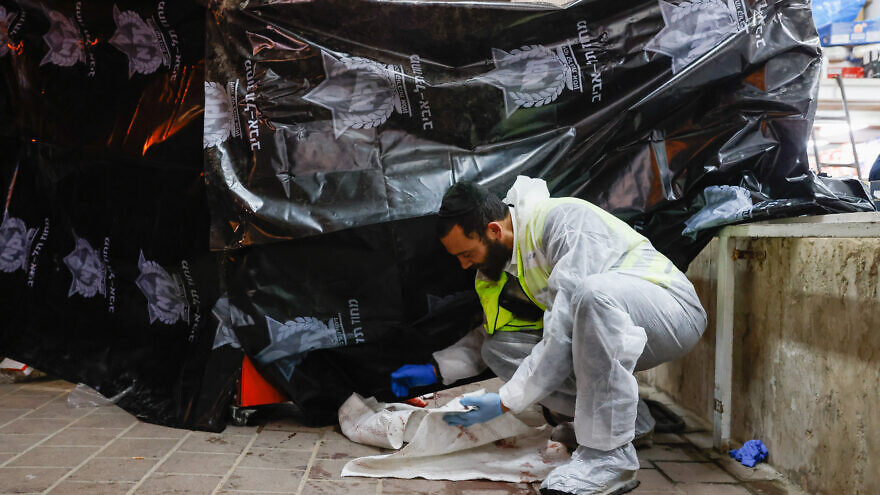 Members of the Zaka organization work at the scene of a shooting attack in Bnei Brak, March 29, 2022. Photo by Olivier Fitoussi/Flash90.
Spread the word.
Help JNS grow!
Share now:

(March 29, 2022 / JNS) Palestinian terror groups celebrated the latest Arab terror attack on Israelis that killed four people in Bnei Brak and one in Ramat Gan in postings on social media.

“The Islamic Resistance Movement (Hamas) blesses the heroic operation against the Zionist occupation soldiers in the so-called ‘Tel Aviv’ area, which led to the killing and wounding of a number of Zionist occupiers, and stresses that all the heroic operations carried out by our Palestinian people, in every inch of our occupied land, comes in the context of the natural and legitimate response to the terrorism of the occupation and its escalating crimes against our land, our people and our sanctities,” Hamas, the terror group that rules the Gaza Strip, wrote on its website.

Palestinian Islamic Jihad also praised the attack, saying “this is the harbinger of our people’s operations to come deep inside the [Zionist] entity.”

Meanwhile, photos on social media showed men in the Gaza Strip handing out sweets to passersby in celebration of the attack in central Israel.

A Palestinian man distribute sweets to people on the street after five Israelis were killed in shooting attack, in Deir al-Balah in the center of #Gaza strip, on March 29, 2022. Photo by Ashraf Amra pic.twitter.com/0UfaRTaMRb

“The cycle of violence shows that a comprehensive, just and stable peace is the shortest, most correct path to security and stability for both peoples,” he said.

A 27-year-old from the West Bank village of Ya’bad opened fire in Bnei Brak on Tuesday evening before moving on to nearby Ramat Gan, leaving five people dead in his wake. He was eventually shot dead by security forces.

As of Tuesday evening, Channel 12 reports that a suspected accomplice has been arrested.

Israeli Prime Minister Naftali Bennett said that he will convene a high-level security cabinet tomorrow to address the three terror attacks that have taken place in recent days.