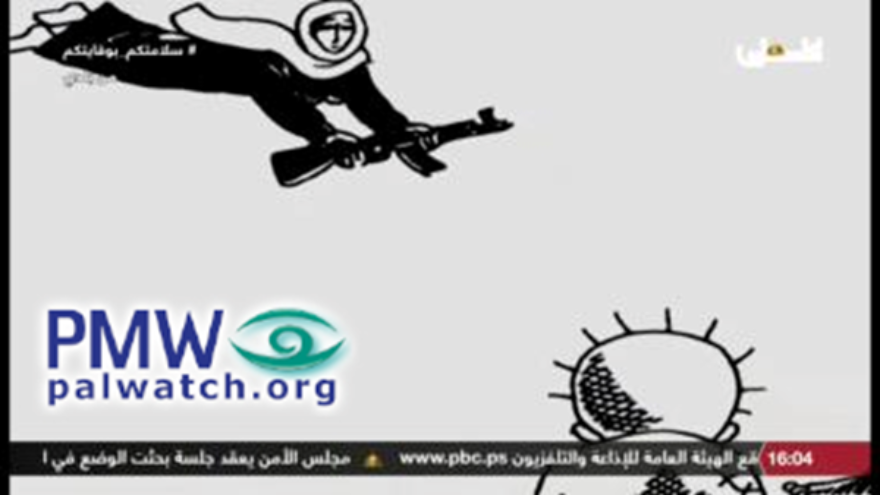 The cartoonist was famous among Palestinians for having invented the cartoon characters “Handala,” a boy who symbolizes the Palestinian refugee, and “Fatima,” a Palestinian woman.

One of the cartoons showed Fatima handing Handala an AK-47 rifle, according to PMW, while another showed Fatima with roots growing out below her dress connecting her to the ground, handing out rocks to children. One of the children, a girl, can be seen throwing a rock at an Israeli/Jew with a large nose and a Star of David on his hat who is covering his head. 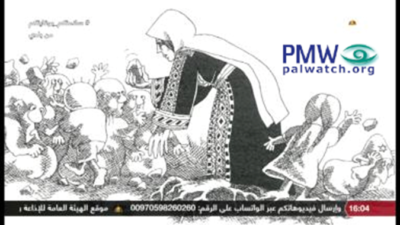 A children’s program on official PA TV that commemorated the late cartoonist Naji Al-Ali showed a selection of his cartoons, several of which promoted violence to kids. Credit: Official P.A. TV via PMW.

The girl narrator on the program explained that Fatima symbolizes the strong Palestinian women:

“Naji [Al-Ali] invented the character of Handala, who was in his drawings regularly and represents a 10-year-old boy who turns his back to the viewers. … Naji had another character who returned again and again in his drawings as the figure of the Palestinian woman, whom Naji called Fatima. She is a character who is not humiliated. Her vision is very clear on everything regarding the cause and the way to resolve it.”