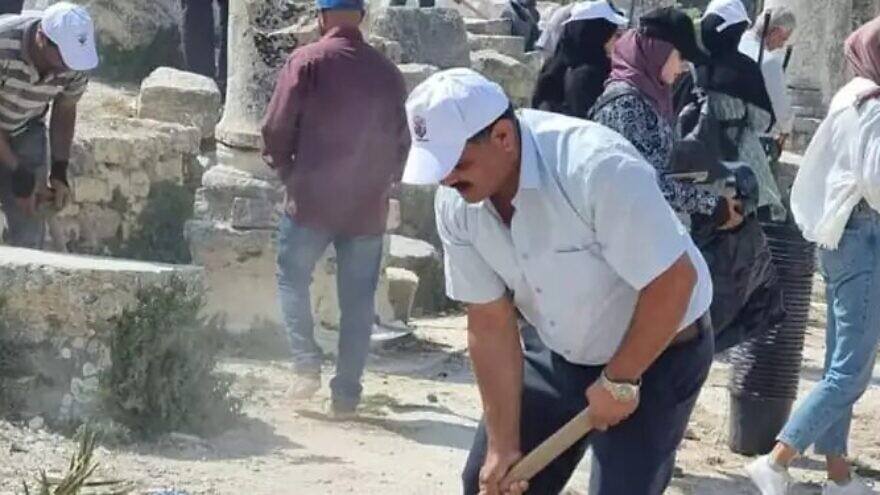 Palestinians take part in the deliberate destruction of the remains of the capital of the Kingdom of Israel. Screenshot: Facebook/Sebastia Municipality.
Spread the word.
Help JNS grow!
Share now:

(December 21, 2022 / Israel Hayom) Over the past few days, dozens of Palestinians have descended on Samaria National Park to carry out “repair works” in which they deliberately destroyed antiquities.

They built a giant flagpole right next to the ruins, on which they hoisted a Palestine Liberation Organization flag. They also hung other flags all over the site.

Samaria National Park, located in Area C (which is under full Israeli control according to the Oslo Accords), contains important historical remnants from the First Temple Era, which are attributed to the capital of Samaria from the time of King Ahab of Israel. Ancient Samaria was the Kingdom of Israel’s capital. According to tradition and the Bible, it was built by King Omri of Israel, who bought the place.

During the early Roman period, the city was expanded and fortified by Herod the Great, who renamed it “Sebastia” in honor of Emperor Augustus (Sebastos is Greek for Augustus).

Archaeological excavations revealed the remains of a magnificent palace, one of the largest in the region. According to the accepted research opinion, the palace was built by Omri and his son Ahab.

The 218-dunam (approximately 54 acres) archaeological excavation site was declared a national park, and the Israel Nature and Parks Authority runs it. Remains from different eras can be seen, especially those of public buildings and worship centers from the Herodian/Roman period and sections of Hellenistic fortifications and towers.

In addition, there are remains of a column-lined road (the Roman cardo) that served as a commercial center.

Dozens of Palestinians carried out the vandalism as part of a move organized by the Palestinian Authority. In a post published on the Facebook page of modern-day Sebastia (a Palestinian village), they took pride in the defacement, published photos of it, and wrote: “Sebastia is thriving. Its administration has proven that it can face challenges and strive towards flourishing even more.” Later they wrote: “We are continuing.”

‘This is irreparable damage’

The Samaria Regional Council, which exposed the vandalism, reacted harshly to the repeated attacks on the site.

Yossi Dagan, head of the council, defined it as the eradication of the Jewish heritage: “The Israeli government has forsaken the Jewish nation’s most important heritage sites. It is unacceptable that rioters are vandalizing the Jewish nation’s history in the heart of the State of Israel. This is an attack on Israel’s heritage. This is irreparable damage,” he said.

Dagan added: “We all hope that the new government and the Jerusalem and heritage minister-designate [Meir Porush] will halt the lawlessness in this area. I call upon them: Take the safeguarding and rehabilitation of the heritage sites upon yourselves as a national project. I also call upon Israel’s security establishment and the IDF to guard the site and prosecute the perpetrators. This is a war on the Jewish nation’s history; we cannot stand by idly.”

This archaeological destruction continues a series of previous acts of vandalism and attacks on the national park in Sebastia and other historical heritage sites in Samaria. Several months ago, large areas of the Sebastia ruins were burned down and much damage was caused to its antiquities and archaeological finds. In addition, the place was graffitied in Arabic.

Adi Shragai, the activities coordinator of the Shomrim Netzach organization, said: “The audacity to shamelessly perform piratical work in the light of day in the national park—a site clearly of the ancient Kingdom of Israel—undeniably testifies to the incompetence of the Israeli government and civil administration. We implore Prime Minister-designate Benjamin Netanyahu: Stop this lawlessness! It is not decreed by fate. Declare now a national emergency plan for the protection of our heritage.”