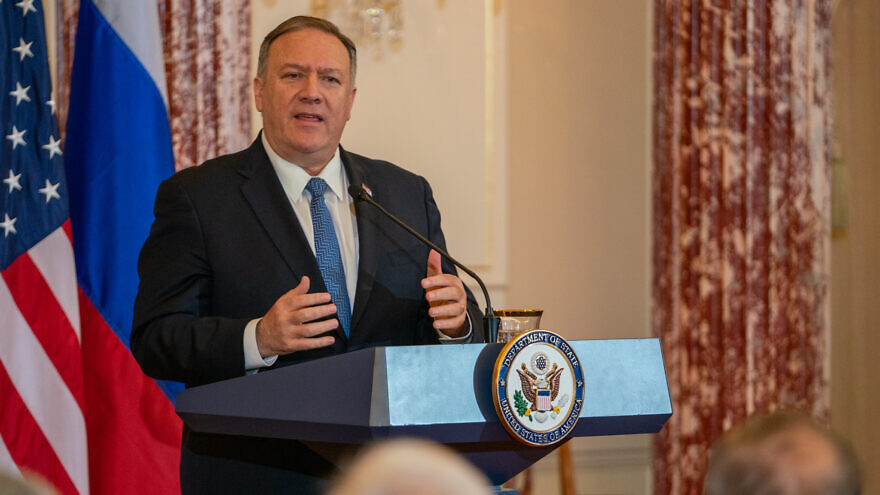 (August 5, 2020 / JNS) The United States will present a resolution at the U.N. Security Council next week to extend the U.N. arms embargo on Iran, announced U.S. Secretary of State Mike Pompeo on Wednesday.

“Of course, the conflict in Yemen has raged in large part because of the Islamic Republic of Iran’s illegal arms transfers to the Houthis,” Pompeo told reporters. “And so next week, the United States will put forward a resolution in the Security Council to extend the arms embargo on Iran.”

“The Security Council’s mission is to maintain ‘international peace and security,’ ” he continued. “The council would make an absolute mockery of that mission if it allowed the No. 1 state sponsor of terrorism to buy and sell weapons freely.”

The 2010 arms embargo is set to be lifted on Oct. 18, in accordance with the 2015 Iran nuclear deal. The Trump administration withdrew from that agreement in May 2018, reimposing sanctions lifted under it, along with enacted new financial penalties against the regime.

The resolution calls on U.N. members to cease all weapons sales to and from Iran, and to not provide “technical training, financial resources or services, advice, other services or assistance related to the supply, sale, transfer, manufacture, maintenance or use of arms” to the Islamic Republic, reported Bloomberg, which acquired a copy of the draft resolution.

U.S. Ambassador to the United Nations Kelly Craft noted on Tuesday that Russia and China are likely to veto any resolution, which would extend the embargo indefinitely. Like the United States, China and Russia are permanent veto members of the Security Council.

The Russians have already stated their intention of resuming the trade of arms to the Islamic regime.