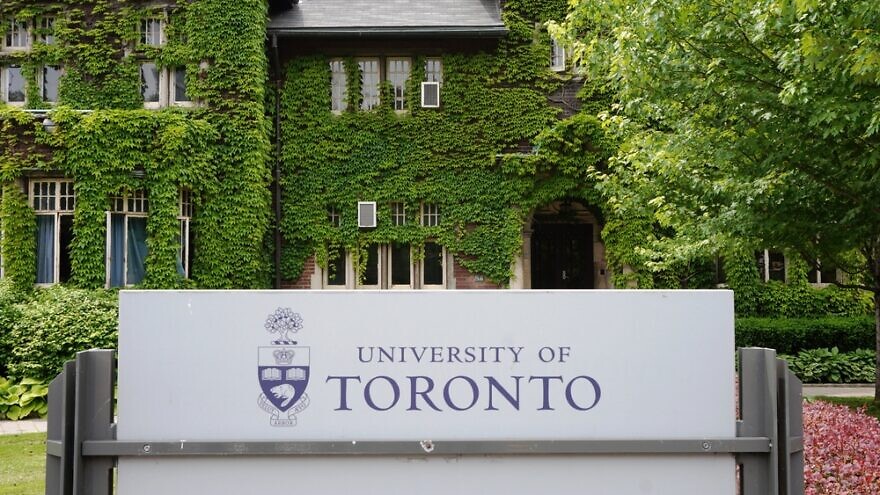 (December 14, 2022 / JNS) One Canadian medical school is certainly not immune to the current epidemic of rising antisemitism, Dr. Ayelet Kuper has revealed.

Kuper, an associate professor in the Department of Medicine at the University of Toronto, last week published her findings from a year spent investigating antisemitism experienced by students and faculty.

From June 2021 to June 2022, the professor served as senior advisor on antisemitism for the Temerty Faculty of Medicine (TFOM), a position created in response to increasing antisemitism on campus.

On Dec. 5, her findings were published in the Canadian Medical Education Journal. In her article, Kuper describes antisemitic statements and viewpoints she experienced herself, and notes her family’s need to conceal their Jewish heritage when not in Jewish settings.

She writes, “My husband and I, as well as our three Jewish school-aged children, are white-passing in appearance; I increasingly use that privilege to hide our Jewish identities under professional and personal circumstances when we are outside the Jewish community, including on or near the U of T campus.”

Kuper relates how COVID-19 exacerbated antisemitic conspiracy theories, prompting antisemites to blame Jews both for the virus and for promoting vaccines.

However, she also cites another rationale: “I was told dozens of times that the current environment of growing antisemitism at TFOM was triggered by the war in Gaza in the spring of 2021, which implies (as was sometimes said to me explicitly) that the cause of TFOM’s ‘antisemitism problem’ is Israel government policy.”

Kuper disputes this timeline, pointing out that rising Canadian antisemitism preceded Israeli actions in Gaza. She writes, “From my personal experience and that of Jewish friends and colleagues at TFOM with whom I used to commiserate prior to taking on the Senior Advisor role, hateful attitudes about Jews have been on the rise at TFOM for at least three years.” Kuper links this rise in campus antisemitism to an increase in antisemitism in Canada as a whole. She points to the 2,799 reported antisemitic hate crimes in Canada in 2021 and notes this was the sixth year in a row to see an increase in incidents.

“I personally experienced many instances of antisemitism, including being told that all Jews are liars; that Jews lie to control the university or the faculty or the world, to oppress or hurt others, and/or for other forms of gain; and that antisemitism can’t exist because everything Jews say are lies, including any claims to have experienced discrimination,” Kuper writes.

She describes a “now-common strategy” in which Jews who counter antisemitism are accused of racism and lying in order to harm Palestinians. The term “Zionism,” she writes, is frequently redefined by opponents of the Jewish state as inherently racist—in an attempt to deny the belief held by 86% of Canadian Jews (according to her findings) that caring about Israel is either essential or important to being Jewish. Given this redefining of Jewish nationalism, Kuper identifies documented instances at the University of Toronto in which Jewish students were required to define their beliefs about Israel and Zionism before being permitted participation in campus activities.

She also points out the trend of some Jews at the university supporting antisemitism.

“Some of those self-identified Jews have said discriminatory things to me about Jews; some of them have also described to me a deep embarrassment at being Jewish,” she writes. Utilizing those of Jewish identity to launder racist sentiments is known as “Jew-washing,” as it enables a denial of antisemitism.

Conspiracist fantasies of Jewish power have also penetrated the university. Kuper reports, “I have heard it said (in person and on social media) within TFOM that Jews control CaRMS (the Canadian Residency Matching Service, which manages the residency selection process), Jews control faculty hiring, and Jews control TFOM’s promotion decisions.”

She also reveals antisemitic fears that “the Jews” can destroy faculty members’ careers. And what are those who stand up for Jews on campus hearing when they seek to counter these falsehoods? They are accused of being “bought by the Jews.”

David M. Litman, senior analyst at the Committee for Accuracy in Middle East Reporting in America (CAMERA), said, “Dr. Kuper’s reflections shed greater light on the extent of the problem that CAMERA’s Education Institute has been working to counter: the pervasive and deeply embedded antisemitic beliefs in academia. Instead of learning about the harms of antisemitic conspiracy theories, it is apparent that in places like the University of Toronto, community members are inculcated with new expressions and formulations of the same old antisemitic conspiracy theories.”

Kuper also documents that stereotypes of Jewish wealth are alive on campus, writing, “For example, almost all TFOM faculty members are physicians, and so by definition are some of the highest earners in Canadian society; nonetheless, it is my experience that Jewish physicians who have comfortable lifestyles are sometimes talked about by other faculty members (as I have sometimes been) as having those lifestyles because they are Jewish, not because they are physicians.”

She reports having personally experienced microaggressions of antisemitism, being told that Jews are “pushy,” “demanding,” “in charge” and only looking out for other Jews.

Kuper explains how academic theories of race and racism have been used to blunt claims of antisemitism.

“I have been repeatedly told by people who are otherwise well-versed in critical race theory and other forms of equity theory that my skin tone alone means I’m white,” she writes. “I therefore have all the same privilege and ease in the world as any white person, and that I therefore can’t possibly understand oppression.”

Kuper writes that colleagues have insisted that her refusal to denounce Israel as a Jewish state means that she is a racist and that any antisemitism she experiences is deserved. One faculty member even told her that Ontario’s Human Rights Code should not protect Jews from antisemitism, claiming the Jew-hatred “isn’t real.”

Another popular academic theory has been employed to silence Kuper and other Jews on campus—that of “cultural appropriation.” Kuper is a child and grandchild of Holocaust survivors, and she has “been berated over the past several years (by non-indigenous colleagues who claim to be acting as allies to indigenous people) for using the concept of intergenerational trauma and told that Jews are ‘appropriating’ the term.”

Such a broad range of arguments and ideas across the spectrum of antisemitic thought has left Kuper without easy solutions for countering hatred on campus. She concludes, “Even as an experienced educator, social justice scholar, and leader, I was frequently at a loss as to how to escape from the circular reasoning that dismissed my experience of discrimination while dehumanizing me, calling me out as racist for defending myself against racism, and ascribing to me sinister, hidden power.”

Jay Solomon, the chief communications and public affairs officer for Hillel Ontario, the largest regional Hillel system in the world, commented, “Hillel Ontario is aware of a Canadian Medical Education Journal article, written by Dr. Kuper. The article details disturbing and unacceptable challenges facing Jewish faculty, staff and learners at the Temerty Faculty of Medicine at the University of Toronto. We commend Dr. Kuper for her willingness to give voice to examples of antisemitism that have become all too common on university campuses across the province.

“For some time, we have been working with U of T administrators to ensure meaningful action would be taken to counter antisemitism on campus. Those efforts are now more important than ever. To that end, we have communicated with the dean of TFOM, and expect to hear what steps the faculty will be taking to address Dr. Kuper’s findings,” Solomon said.

“It is the Jewish Student Alliance at the University of Toronto’s opinion that Dr. Ayelet Kuper’s experiences and reflections, as mentioned throughout her article, though extremely disheartening and nothing short of the truth, are not unique to U of T’s Temerty Faculty of Medicine,” said Maytal S. Lazarovic, founder and president of the group.

“Felt by Jewish students across the U of T campus, antisemitism is a pervasive poison which shapeshifts and molds to fit modern-day narratives. We hope that the lived experiences in this paper further encourage U of T students, staff and faculty to recognize the importance of listening to their Jewish counterparts, validating their experiences, and making sure not to define antisemitism or Jew-hatred on Jewish peoples’ behalf. As hate crimes against Jewish people in Canada continue to soar, breaking records year after year, we urge people to take on allyship in order to remind Jewish students, staff and faculty on campus that they are recognized, valued and protected,” Lazarovic said.

JNS reached out to the school’s administrators for comment but did not receive a response by press time.