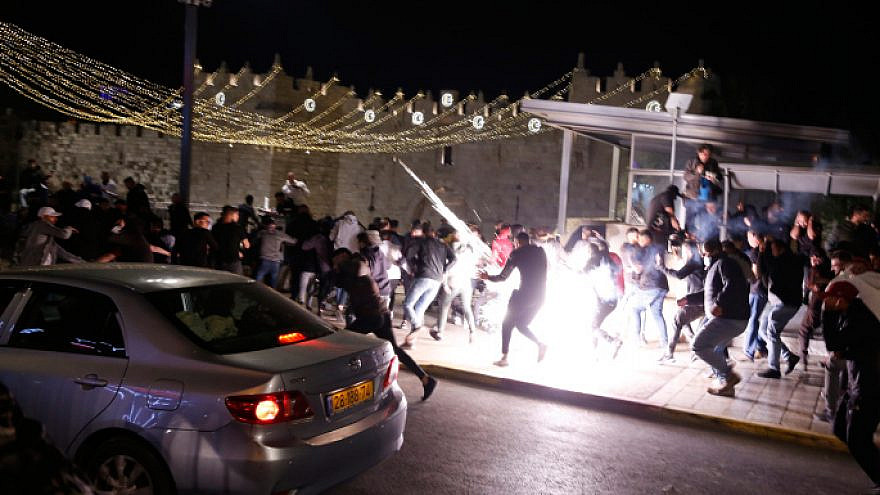 (May 10, 2021 / JNS) In the wake of clashes in Jerusalem that left some 200 Arabs and 17 Israeli police officers injured, Palestinian Authority leader Mahmoud Abbas’s Fatah Party called on Saturday for increased violence in the city, Palestinian Media Watch (PMW) reported.

“The Fatah Movement with all its elements and leadership calls to continue this uprising … Fatah calls on everyone to raise the level of confrontation in the coming days and hours in the Palestinian lands, the points of friction and the settlers’ roads,” the Fatah Central Committee announced in a statement.

The statement, which opened with a quote from the Koran, was posted to numerous official Facebook accounts, including those of Fatah, the P.A. Presidential Guard, Fatah deputy chairman Mahmoud al-Aloul and Fatah Central Committee member Rawhi Fattouh, according to the report. It was further disseminated through WAFA, the official P.A. news agency, and in the official P.A. daily Al-Hayat Al-Jadida, as well as in private news agencies.

Addressed to the Palestinian residents of Jerusalem, the statement lauded rioters as war heroes: “We bow to you in admiration and honor before your sacrifice and your stand that are being expressed in this heroic battle in Jerusalem.”

It goes on to state: “The Fatah Movement with all its elements and leadership calls to continue this uprising and stand against the occupation forces, the settlers, and their terrorist organizations that are working with the support of the right-wing fascist Israeli government.”

Accusing Israel of a number of provocations, it calls for “a comprehensive confrontation in all the Palestinian lands” and appeals to Palestinians to gather on Monday, May 10, for “a day of action.”

According to PMW director Itamar Marcus, the timing of the current wave of violence comes as no surprise.

“After canceling the Palestinian elections because his Fatah party faced certain defeat, Abbas was at his lowest popularity ever, with no legitimacy to continue ruling. He was desperate to redirect Palestinian wrath from him to Israel. So, as he has done in the past, Abbas created a crisis over Jerusalem and the Al-Aqsa Mosque. Palestinians are going out to fight and attack Israelis in the name of protecting the Al-Aqsa Mosque, but the only one they are protecting is Mahmoud Abbas, from impending political demise,” he said.

Abbas announced on April 30 that the Palestinian parliamentary elections, which had been scheduled for May 22, would be “indefinitely delayed.”

According to PMW, Saturday’s announcement was not the first time Fatah has incited the current violence in Jerusalem.

In early May, on the same day that three Israeli teens were shot in a drive-by attack on a bus stop in Samaria, Fatah posted to Facebook an old song: “O self-sacrificing fighter, make sure your bullets hit the ‎target.” One of the victims, Yehuda Guetta, 19, later succumbed to his wounds.

Fatah was also quick to refer to riots in Jerusalem as “an uprising and intifada,” and a 2014 video of Abbas calling on Palestinians to “defend Jerusalem with our lives” was re-broadcast numerous times.

According to senior PMW analyst Nan Jacques Zilberdik, while many in the international and even the Israeli media have singled out Hamas as being behind the current wave of violence in Jerusalem, it is Abbas and the P.A. that bear primary responsibility.

“As Palestinian Media Watch has exposed, Abbas himself, his Palestinian Authority and his Fatah Movement, which is part of the PLO, were the ones who initiated the incitement to violence and terror,” she said, adding, “only afterward did Hamas join in.”

Abbas, the P.A. and Fatah have been “unequivocal” in their support for the ongoing violence in Jerusalem, she said.

“Abbas has not wasted one moment during the riots, utilizing every opportunity to express support for the rioters and ‘salute’ them for their resolve ‎against the Israeli plans to take control of the holy city,” she said.