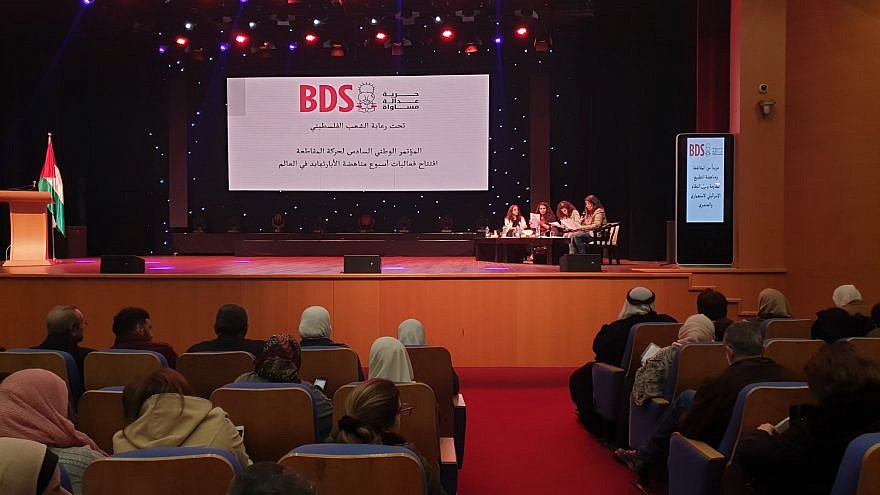 (April 25, 2019 / JNS) At the sixth BDS National Conference on March 16 in Ramallah, the BDS National Committee presented a comprehensive 2019-2020 strategic plan for the movement, focusing on expanding boycott practices, implementing a strict “anti-normalization” policy with Israel and seeking to lobby key international organizations such as the European Union against Israel.

Conference workshops were focused on BDS policies, labor sectors and trade unions, normalization standards and BDS efforts in the Palestinian territories. Raising eyebrows within the Jewish and international community, the conference was supported and promoted by the terror-affiliated Palestinian National and Islamic Forces, and attended by leaders of the Popular Front for the Liberation of Palestine and the Palestinian Liberation Front.

According to BDS experts Brig. Gen. (res.) Yossi Kuperwasser and Dan Diker, project director for the Program to Counter Political Warfare and BDS at the Jerusalem Center for Public Affairs, the organizers’ affiliations and cooperation with terrorist groups indicate that BDS is aimed at annihilating the Jewish state—the political form of terrorism.

Currently led by Omar Barghouti, founding committee member of the Palestinian Campaign for the Academic and Cultural Boycott of Israel, the BDS movement “globally exports political warfare and support for terrorism as evidenced by co-equal membership by international Palestinian, Islamic and Arab terrorist organizations on the BDS National Committee,” Diker told JNS.

“BDS is the complementary activity of the terrorist organizations,” similarly stated Kuperwasser, director of the Project on Regional Middle East Developments at the Jerusalem Center for Public Affairs (JCPA), and formerly director general of the Israel Ministry of Strategic Affairs and head of the Research Division of IDF Military Intelligence.

“With heavy involvement of terrorist activists, BDS is supporting the same goals as terrorism—delegitimizing Israel—with a different way of action,” he told JNS.

‘Something that should be fought against’

Conspicuously, both Diker and Kuperwasser agreed that by promoting anti-normalization, BDS clearly shows that it does not aim to help the Palestinians, as the Palestinians are the ones who gain the most by normalizing and working together with Israelis, whereas Israel would do just fine without cooperating with the Palestinians in business.

Kuperwasser noted that 100,000 Palestinians work in Israel proper and tens of thousands more in joint projects with Jews in the West Bank industrial zones. Thus, he said, enforcing anti-normalization would mean that many Palestinians would lose their livelihoods and income.

“The Palestinian working public has demonstrated a deepening interest in working closely with Israel, proving that BDS does not represent the 30,000 Palestinian men and women working in 14 industrial zones of Area C of West Bank, together with Israelis and protected by Israeli labor law,” said Diker.

“What we witnessed through the BDS National Conference is an even greater suicidal tendency of the Palestinian NGOs in the BDS movement by showing they would prefer to destroy the Palestinian political and economic future in service of destroying the Jewish state,” he added.

With such overt and negative implications and affiliations, Kuperwasser maintained that it’s becoming easier and easier to see through the BDS movement’s true intentions. Even notorious critics of Israel like Norman Finkelstein and Noam Chomsky have come out against BDS, saying “we can be critical of Israeli policies, but we are not in favor of destroying it.”

“Many people around the world and in the mainstream have come to the conclusion that BDS is something that should be fought against,” said Kuperwasser. “Neither conservatives nor liberals want to collaborate with terrorists, and now understand that BDS aims to destroy Israel and represents the new face of anti-Semitism.”

Diker noted that U.S. House Reps. Rashida Tlaib’s (D-Mich.) and Ilhan Omar’s (D-Minn.) reliance on anti-Semitic tropes to make their cases in support of BDS, together with the spike of anti-Semitic assaults and harassment from college campuses to the public square in the name of BDS, has triggered larger questions about the BDS movement.

These questions have led to growing condemnation by European leaders of BDS as a demonstrably anti-Semitic crusade—from British Prime Minister Theresa May to German Chancellor Angela Merkel to French President Emmanuel Macron, “who have all said that BDS is simply a repackaged anti-Semitism,” continued Diker.

However, he argued, this perspective has not yet filtered through to the European public, whose blind support for Palestinian leadership has left them in a “fantasy world, believing that BDS is a grassroots, peaceful organization dedicated to pave the way to a Palestinian state next to Israel.”

“This is false,” said Diker. “BDS maintains that there should be no political coexistence with a Jewish entity, and anything short of replacing Israel with the 23rd Arab, Palestinian and Islamic state is a loss. And BDS leaders are radical activists whose sole objective is to isolate, delegitimize and dismantle the state of Israel as we know it today.”

Following the national conference and in order to expose the BDS movement for what it is, Diker suggested that American and Jewish mainstream, as well as European, leaders must “hold up the evidence of BDS’s active support for terror and political warfare against the Palestinians’ Jewish neighbor.”