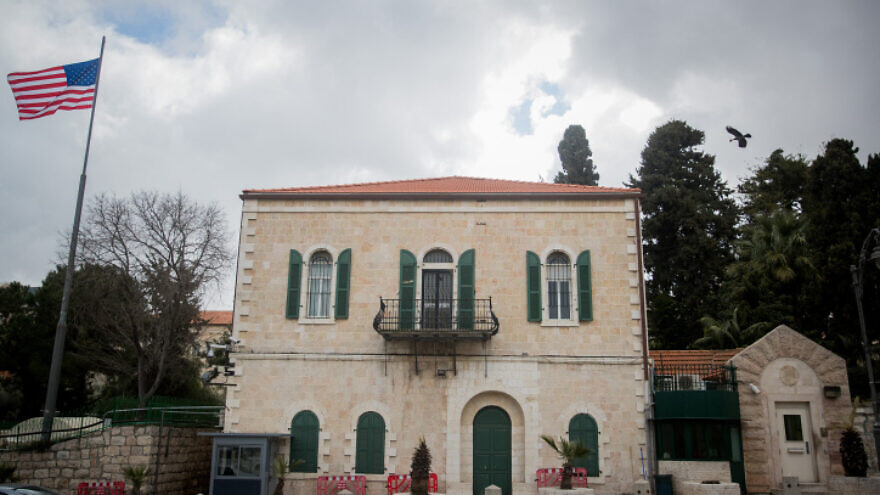 (December 24, 2021 / JNS) All indications are that the administration of U.S. President Joe Biden has given up, at least for the foreseeable future, on efforts to reopen its consulate to the Palestinians in Jerusalem. The facility on Jerusalem’s Agron Road, by all indications, will remain the Palestinian Affairs Unit of the U.S. Embassy to Israel.

For practical purposes, it makes little difference. But, symbolism is everything in this situation.

Earlier this week, State Department spokesperson Ned Price was asked multiple times for an update on the matter, but said repeatedly that he had nothing to offer. Tellingly, when asked to confirm simply that the State Department was still committed to the consulate’s reopening, Price repeated that he had no update available.

The fact that Price no longer feels comfortable affirming what had been a written-in-stone position of the administration since before Biden even took office sums up where the issue stands. The consulate, long the de-facto line of communication between Washington and Ramallah, was downgraded in 2019 by the administration of then-U.S. President Donald Trump, as payback for Ramallah’s recalcitrance in helping Washington advance its peace plans for the region, and Palestinian Authority leader Mahmoud Abbas’ derogatory comments toward Trump. Instead, the State Department relabeled the consulate as a Palestinian Affairs Unit and subsumed it to the larger U.S. Embassy to Israel, placing it under direct control of then-U.S. ambassador David Friedman, a noted critic of – and foe to – the P.A. government.

Since the spring, when U.S. Secretary of State Antony Blinken notified Abbas of plans to reopen the consulate, Washington has offered no timeline for the process and no signs that it has advanced its plans. Instead, it met a thunderous pushback from across the Israeli political spectrum.

A pair of Israeli government sources say Israeli Foreign Minister Yair Lapid sent initial signals that the government of Israeli Prime Minister Naftali Bennett was open to the reestablishment of the consulate, in an effort to get into the good graces of the Biden administration. Those messages, the sources say, ran contrary to Bennett’s position on the matter, and were a result of lack of coordination between the prime minister and his alternate in the early days of an oddly-structured government. Those sources indicate that Lapid asked for enough time for the Bennett government to pass a mandatory budget by mid-November in order to keep the Knesset from dissolving, and to keep the fraught issue of the consulate reopening off the government’s plate until then. That only fueled growing public pronouncements by the Biden administration that it would fulfill its campaign pledge, in an effort to reestablish ties with the P.A. that Ramallah cut during the Trump administration. Abbas had demanded the reopening of the consulate as a condition for resuming regular high-level communication with the Americans.

Hendel’s message reflected a wide-ranging clarification among Israeli officials around that time in their dealings with their American counterparts on the consulate issue: Don’t expect anything to change after the budget passes and don’t expect anything to change if the composition of the government should be altered. Just a week earlier in Washington, Lapid sat in the same room with Blinken as the latter publicly repeated the pledge to reopen the consulate. Behind closed doors, sources indicate Lapid was in subtle walk-back mode on his initial pronouncements to Blinken. It is up to the Israeli government, under diplomatic norms, to approve any foreign diplomatic mission on its sovereign soil, giving it leverage in this standoff. Meanwhile, a number of U.S. legislators point to the widely-approved Jerusalem Embassy Act of 1995, which calls for an undivided capital of Israel, as a basis that the reopening of the consulate to the Palestinians would violate the spirit – if not the letter – of American law.

Over the last two months, those Biden administration pronouncements, once loud and often, have dwindled and quieted, leading to Price’s notable lack of affirmation on Monday.

Jake Walles, the U.S. consul general and chief of mission in Jerusalem from 2005-2009, recently said that, for almost all practical matters, it makes little difference in the end whether the sign above the door reads, “U.S. Consulate” or “Palestinian Affairs Unit.”

“That’s sort of a part of a larger question, which is: What actually changed in all of this? Which is not that much. Most of the people that sit in the building on Agron Road in Jerusalem are still dealing with the Palestinian Authority. So, in terms of reopening the consulate, I think of two things. One is that you would again have a consul general. A senior official will be in charge of the affairs with Palestinians and would have a direct line back to Washington. That’s a full-time job that needs to be done by a senior person. The ambassador to Israel doesn’t have time to do his job dealing with Israel and the Palestinian job,” Walles said.

George Noll — a career member of the Senior Foreign Service, who currently serves as assistant deputy chief of mission and head of the Palestinian Affairs Unit at the U.S. Embassy to Israel — was given a direct line to Washington in the tradition of former consuls general, bypassing the ambassador’s office, The Times of Israel recently reported. The State Department would not confirm the report. That rumored measure, though, may buy Washington some time and grace with Ramallah.

U.S. National Security Advisor Jake Sullivan and Acting Assistant Secretary of State for Near Eastern Affairs Yael Lempert both met with Abbas earlier this week. Nothing in the readouts of those meetings mentioned the consulate issue, let alone deemed it a priority, giving another indication of its de-emphasis in the larger American-Palestinian relationship.