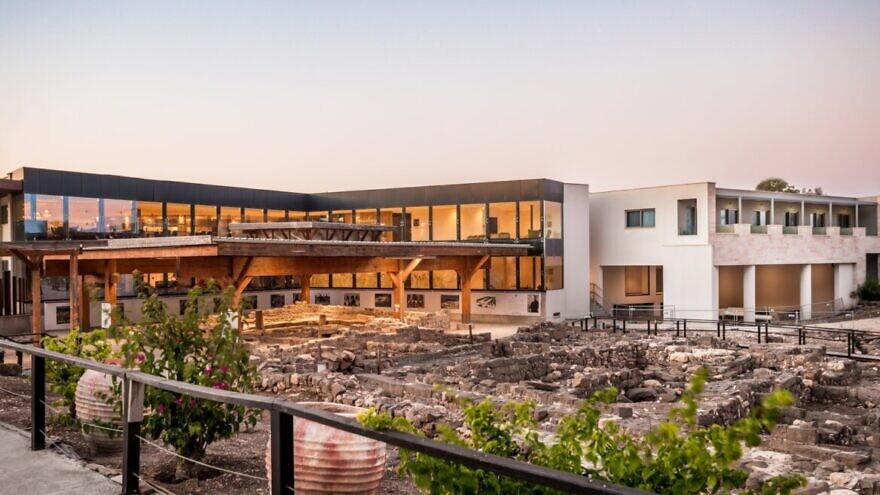 This is the idea behind the Magdala Center on the shore of the Sea of Galilee. It’s a place where tourists can stay in the brand-new Magdala Hotel, swim in the pool, stroll the lovely grounds—and have a meaningful spiritual experience.

The hotel is situated next to one of the most significant archeological finds in the past 50 years: the Magdala Stone.

In 2009, when workers began to dig the foundation for the hotel near Migdal Junction, near Tiberias, they discovered the ruins of a synagogue dating from the first century. It is the oldest synagogue excavated in the Galilee, and one of only seven first-century synagogues discovered in Israel. 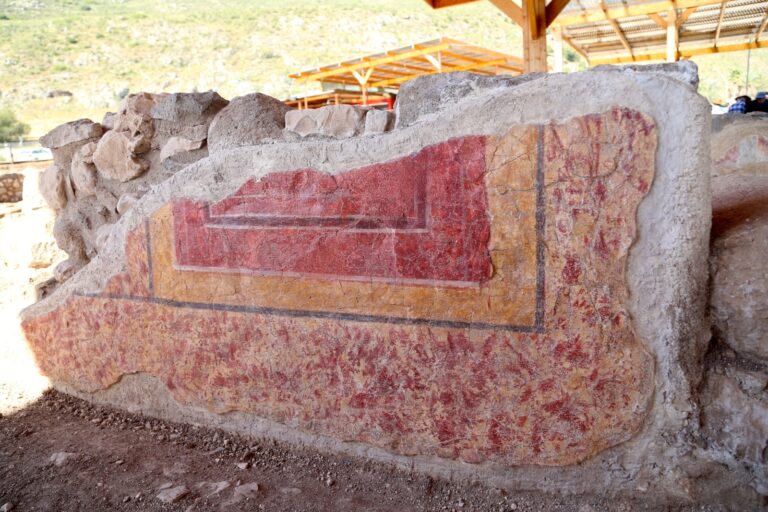 Archeologists uncovered colorful frescoes and mosaics along with stone seating areas and columns.

After more digging in a small room off to the side of the synagogue, they found the Magdala Stone. 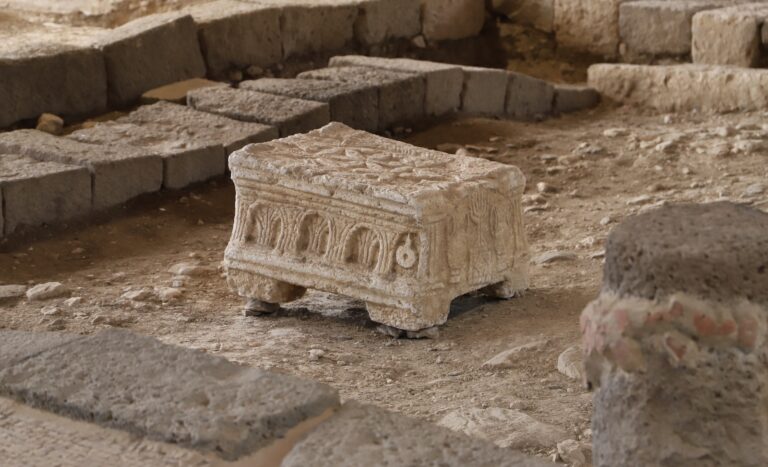 The Magdala Stone where it was uncovered. Photo by David Delgado.

The stone’s carvings include a seven-branched menorah similar to the one in the Jerusalem Temple, oil or wine jugs, a chariot, and a six-petal rosette design on top of the stone.

Completely accidental? People at the Magdala Center call it heaven-sent.

When the Rev. Juan María Solana, the papal appointee in charge of Notre Dame of Jerusalem Center, a pilgrimage guesthouse, decided to build a retreat center in the Galilee, he envisioned a place where tourists and pilgrims could enjoy comfortable accommodations in a spiritual atmosphere.

Little did he know that his early concept of spiri-tourism would spark an archeological discovery.

“I think the fact that Solana wanted to build the Magdala Center here before the discovery is providential,” said David Delgado, marketing and development director of the center.

“The discovery of the ruins allows the project to gain much more value in a historical, cultural and spiritual sense.” 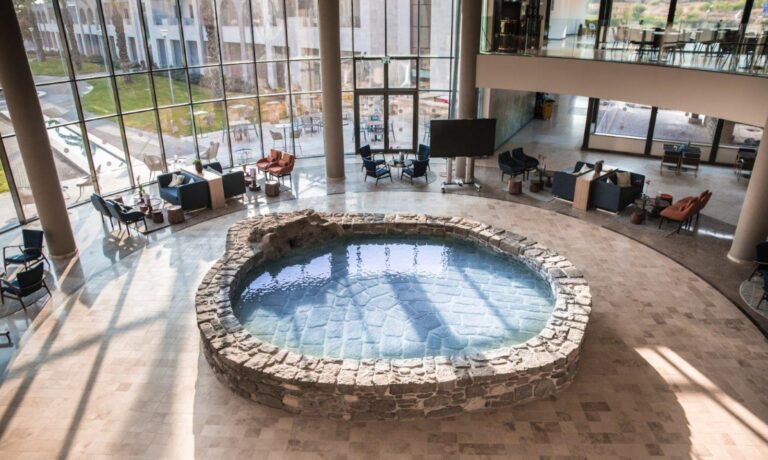 A fishpond restored from the ancient village in the center of the Magdala Hotel lobby. Photo courtesy of Magdala Tourism Center.

Dating from Alexander the Great

During a tour of the archeological site, Magdala Center guide Father Eamon Kelly painted a portrait of life in the ancient town of Magdala.

Scholars believe the seaside town was established in the Hellenistic period, starting in 332 BCE when Alexander the Great conquered the land. It became a thriving town.

“You can imagine the shopkeepers, fishermen and townspeople,” Kelly said. 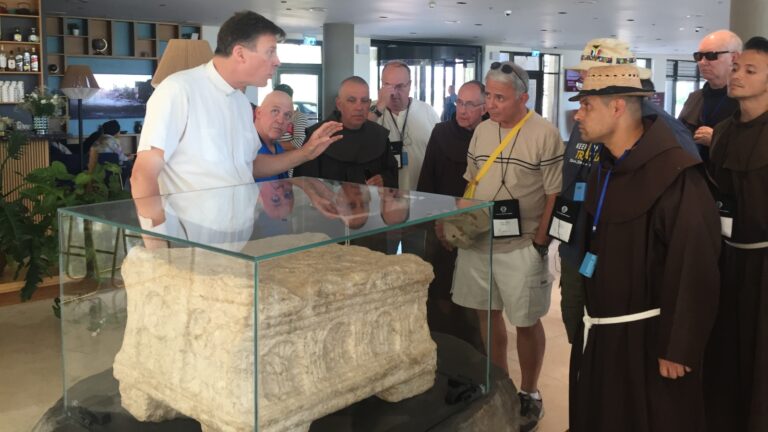 The Rev. Eamon Kelly in the lobby of the Magdala Hotel, speaking to a group of pilgrims by the Magdala Stone. Photo by Diana Bletter.

The archeological park contains the ruins of a large marketplace with more than 20 rooms where produce, fresh-caught fish, pottery and woven goods were sold.

Although archeologists have so far uncovered just 10 percent of Magdala, they also discovered mikvaot (Jewish ritual baths) fed by underground springs that continue to function today. 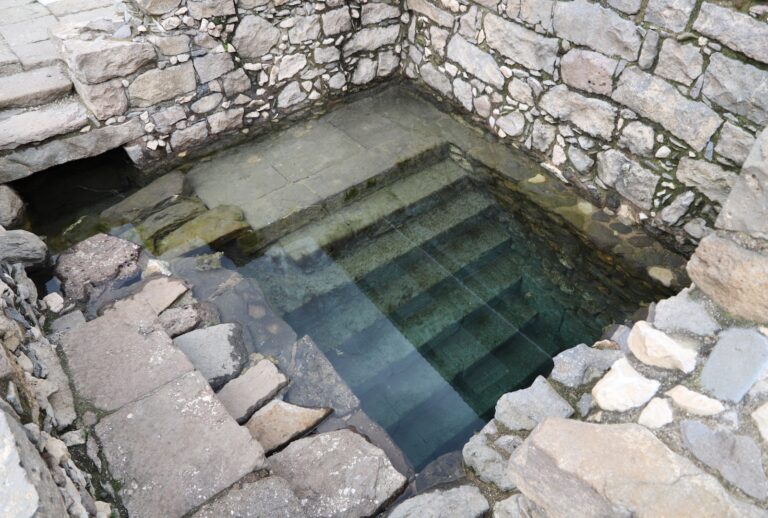 There is also a cluster of houses arranged in a grid, as if by a modern urban planner, and a fishermen’s work area, where hooks and weights for fishing nets were found.

By the seashore, there is a wharf with a mooring stone that indicates the level of the sea centuries ago.

Magdala was situated on a major commercial trade route, the Via Maris.

Since the site is called the “crossroads of Jewish and Christian history,” Kelly also mused, “Who else might have walked along the road?” 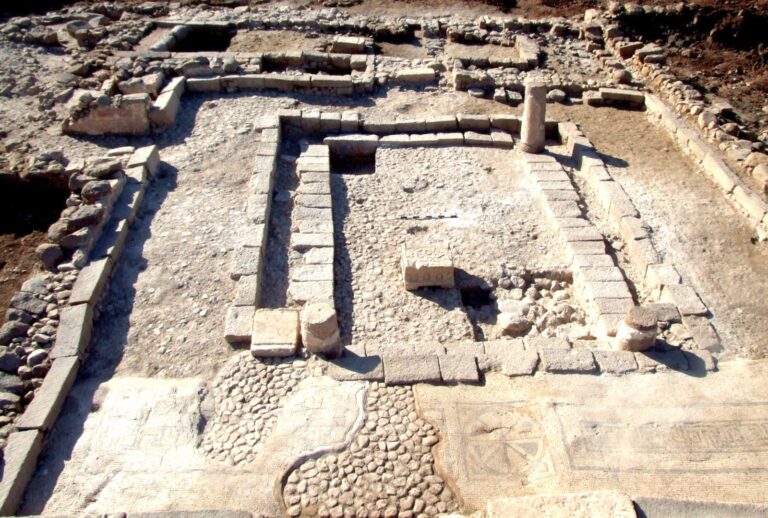 Aerial view of the remains of a first century synagogue in Magdala. Photo courtesy of Israel Antiquities Authority

Some scholars speculate that this was the hometown of Mary Magdalene, a Jewish woman sometimes called Mary of Magdala. According to the Christian Gospels, she traveled with Jesus as one of his followers.

Other researchers believe that “Magdalene” could have been an honorific title from Hebrew and Aramaic words meaning “tower” or “magnified.”

The goal of the Magdala Center is to simulate a first-century Galilee experience in the 21st century. 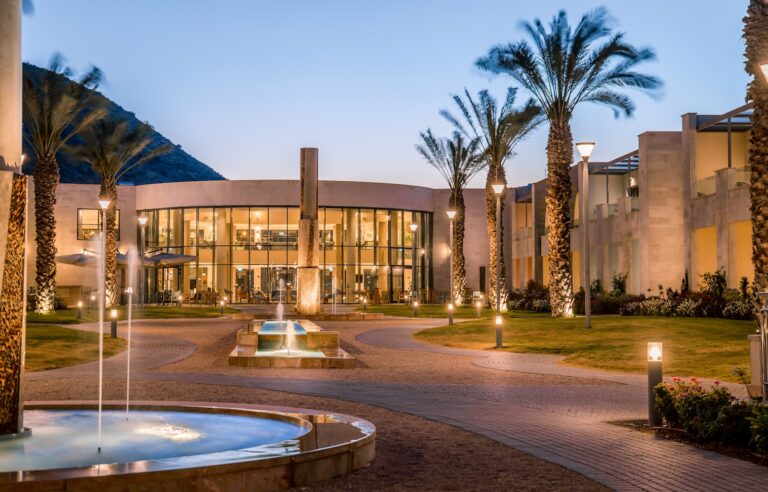 For Christian pilgrims, this is an authentic location to walk where Jesus might have visited and taught, connecting visitors with the life of Jesus and his followers.

The Magdala Center’s founders hope that the site will build positive relationships with diverse Christian believers and help foster reconciliation between Christians and Jews, providing what Pope Francis calls “the culture of encounter.”

“It’s a challenge to live in the real world,” Kelly said. “We’re trying to heal prejudices.”

The archeological site draws visitors from around the world, and the staff at the hotel include Jews, Christians, Muslims and Druze. Kelly recently welcomed a group of Franciscan monks from abroad.

The impressive chapel on the center grounds is called Duc in Altum, Latin for “put out into the deep.”

Kelly explained that those were “the words that Jesus said to Peter, prompting him to go into deep water.” It’s also a call for people to look for deeper meaning in their lives. 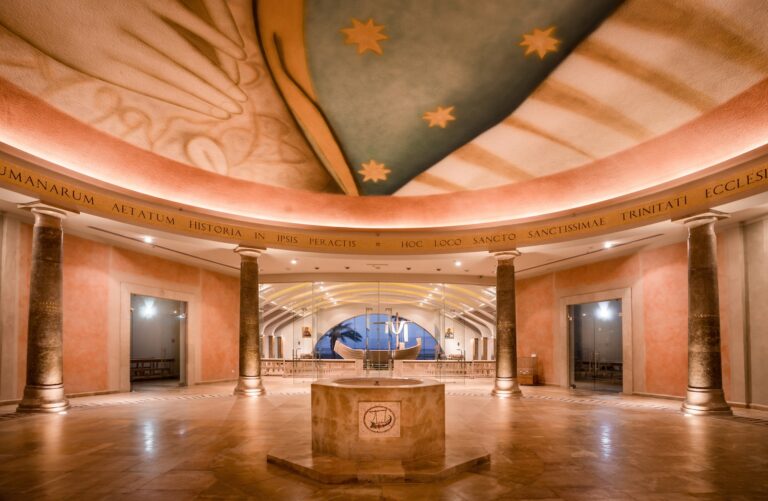 The Duc in Altum Chapel in Magdala, with its boat overlooking the ancient port. Photo courtesy of Magdala Hotel

Its atrium is dedicated to women, with seven pillars representing women who followed Jesus and an eighth pillar to honor “women of all faith.”

There’s a large boat in a wide arched window overlooking a port from the first century to replicate where Jesus preached, Kelly said.

“You wouldn’t believe how many people have had amazing spiritual experiences here,” Kelly said. “It’s life-changing.”

Click here for information on visiting the Magdala Center and hotel.