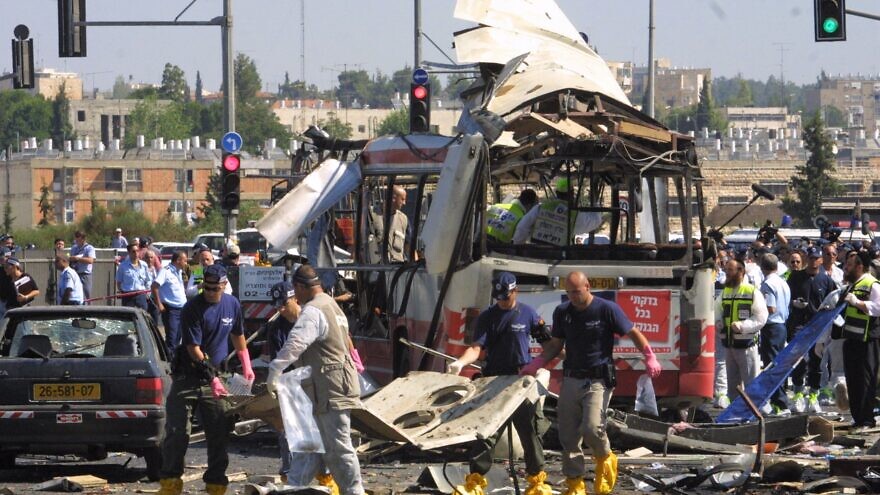 Paramedics and police at the scene of a suicide bombing that killed 19 and wounded 74 on a bus in Jerusalem. Hamas claimed responsibility for the attack, June 18, 2002. Photo by Flash90.
Republish this article
1660 WORDS
Spread the word.
Help JNS grow!
Share now:

The Turkish diplomat, who served as consul general in Jerusalem (and “ambassador” to the Palestinian Authority) between 2010 and 2013, assumed the position four years after President Recep Tayyip Erdoğan withdrew Turkey’s ambassador from Israel and ousted Jerusalem’s top envoy amid fighting between the IDF and Palestinians along the Gaza border.

On Dec. 27, Erdoğan received the credentials of Ambassador Irit Lillian of Israel at the presidential complex in Ankara.

Following over a decade of tension between the two countries, a further attempt at rapprochement is underway. Yet there is a huge elephant in the room: Since January 2013, Hamas terrorists have operated freely in Turkey.

On Monday, journalist Yoni Ben Menachem reported for the Jerusalem Center for Public Affairs that “Hamas spies on Israel for Iran from Istanbul.”

In fact, the year 2022 marked the 10th anniversary of the official establishment of the Hamas terror organization’s offices in Istanbul.

In December 2021, the Jerusalem Center for Public Affairs published a report titled “Hamas’ Istanbul Headquarters Has Directed Hundreds of Terror Attacks Against Israelis and Laundered Millions of Dollars.” It states:

“Turkey collaborates with terror organizations on both the ideological and operational levels. Terrorists working on Turkish soil establish infrastructures and plan terror attacks against Israel. Hamas senior officials (most former inmates in Israel for terrorism who were released in a prisoner exchange) are operating from Turkey against Israel….

“Despite the official Turkish claims, not only Hamas’ political activity is involved. According to the Shabak (Israeli Security Agency), [aka the Shin Bet], over the years, the Istanbul headquarters, branches and operatives have directed hundreds of terror attacks and attempted attacks in Israel and the West Bank in particular.”

The report also sheds light on Hamas’s companies and money laundering in Turkey.

“The Shabak’s investigation revealed extensive Hamas money laundering in Turkey under the supervision of Zaher Jabarin, with the authorities turning a blind eye to the source of the funds. The investigation also found that Hamas operatives owned a company named Imas, which served Hamas by camouflaging money-laundering activity involving sums of millions of dollars that were transferred to Gaza and different countries.”

Some of the Hamas terrorists who operated in Turkey and even murdered Israelis were, according to the report:

“Mahmoud Atwan, originally from the east Jerusalem neighborhood of Sur Baher, freed in the Shalit deal, member of the cell that kidnapped and murdered Border Police officer Nissim Toledano in 1992; Majid Abu Katish, originally from Anata, also a member of that cell; Taiser Suleiman, expelled in the Shalit deal, murdered an Israeli soldier; Fahad Sabri Barhan al-Shaludi, appears from time to time on Turkish television; Walid Zakaria Akel, a founder of Hamas’ Izzadin al-Qassam Brigades, was given 21 life sentences; Haroun Mansour Yakoub Nasser al-Din, boasted in the past that Turkey grants former Hamas prisoners full freedom to come and go as they please; Ayman Mohammad Abu Khalil; Bakri Hanifa, a senior economic figure in Hamas claimed to have transferred millions of dollars from Qatar to Hamas via Turkey; and Maher Abid, a member of Hamas’ Political Bureau and senior financial operative, reportedly in charge of Hamas’ international relations until 2016.”

A role in the Palestinian arena

“It appears that despite the talk about Turkey imposing restrictions on Hamas, the Palestinian Islamist group and some of its leaders continue to operate in Turkey. Turkey has not officially and publicly distanced itself from Hamas. Hamas, on the other hand, says its relations with Turkey remain strong despite the rapprochement between Ankara and Jerusalem. Obviously, Erdoğan does not seem to be interested in totally cutting off his ties with Hamas, because he sees the group as a means for Turkey to play a political role in the Palestinian arena.”

During a visit to Ankara in 2022, Israel’s then-defense minister, Benny Gantz, asked his Turkish counterpart to oust Hamas from the country—a request Turkey rejected.

“We did not meet a demand regarding Hamas. We do not see Hamas as a terrorist organization,” said Turkey’s Minister of Foreign Affairs Mevlüt Çavuşoğlu in November 2022, according to the Sözcü newspaper.

In fact, some Hamas terrorists can freely travel across the world with their Turkish passports. Ankara granted citizenship to at least 12 high-ranking Hamas members and was planning to grant it to other members, the Telegraph reported. This was confirmed by Roey Gilad, chargé d’affaires at Israel’s embassy in Turkey.

In 2020, a Czech member of the European Parliament, Tomáš Zdechovský, submitted a question to the legislature regarding Turkey’s granting citizenship to Hamas operatives, saying:

“This information raises concerns that the Palestinian group will have greater freedom in planning attacks on Israeli citizens around the world. Turkish citizenship will allow Hamas members to use Turkey as a base for their operations. At the same time, the USA and the European Union consider Hamas to be a terrorist organization, and so the security of the entire E.U. is at stake.

“1. In light of the foregoing, is the [European] Commission aware that the security of the European Union is at stake?

“2. Is the EU conducting a debate with Turkey in this regard?” Zdechovský asked.

The presence of Hamas companies in Turkey has been confirmed by the U.S. government. On May 24, 2022, the United States imposed sanctions on a Hamas finance official as well as a network of financial facilitators and companies that generated revenue for the terror group.

The sanctions target Hamas’s Investment Office, which holds assets estimated to be worth more than $500 million. This includes companies operating in Turkey, Sudan, Saudi Arabia, Algeria and the United Arab Emirates.

“Today’s action targets the individuals and companies that Hamas uses to conceal and launder funds,” said Assistant Secretary of the Treasury for Terrorist Financing and Financial Crimes Elizabeth Rosenberg while in Israel to discuss countering terror financing.

The news site Nordic Monitor reported on June 6, 2022, that a Jordanian Hamas financier, Hisham Younis Yahia Qafisheh, who co-owns a Turkish real estate company sanctioned by the U.S. Treasury, has acquired Turkish nationality and changed his name to a Turkish one:

“Hisham Yunis Qafisheh, who played an important role in the transfer of Hamas funds and managed several companies on behalf of the militant organization, is listed as one of the board members of Turkish real estate investment firm Trend Gayrimenkul Yatırım Ortaklığı A.Ş.

“In 2021, he “apparently assumed the Turkish name Haşmet Aslan and obtained a Turkish national identification number, which means he acquired citizenship in Turkey.”

Financial and military cooperation between Turkey and Hamas also involves the Iranian regime and Hezbollah. According to a 2021 report by the Nordic Monitor:

“A Turkish company set up by Hamas operatives to funnel funds from the Islamic Revolutionary Guard Corps-Quds Force (IRGC-QF) and Hezbollah to the Qassam Brigades dissolved itself after it was designated by the U.S. Treasury as a sponsor of terrorism.”

Turkey seems to be the main lifeline for Hamas terrorists. This alliance appears to stem from the ideological affiliation between the government of Turkey and Hamas, as Erdoğan openly declared in 2017 when he targeted the Jewish people by referring to a hadith (a traditional account of Islam’s prophet Muhammad’s deeds and sayings) about Judgment Day.

Erdoğan at a “Human Rights Day” event in Ankara on Dec. 10, 2017: “Those who think they are the owners of Jerusalem today will not even be able to find trees to hide behind tomorrow.”

Erdoğan‘s comment came in response to the Trump administration’s recognition of Jerusalem as Israel’s capital. According to the hadith, for “the coming of the hour,” “the Jews must suffer a violent death to the last one.”

The Hamas Charter  refers to the same hadith:

“The Day of Judgement will not come about until Moslems fight the Jews (killing the Jews), when the Jew will hide behind stones and trees. The stones and trees will say O Moslems, O Abdulla, there is a Jew behind me, come and kill him. Only the Gharkad tree would not do that because it is one of the trees of the Jews.”

In line with their genocidal ideology, Hamas terrorists have carried out attacks that include shootings, suicide bombings and standoff mortar and rocket attacks against civilian and military targets.

Yet Hamas, which has the blood of hundreds of innocent people on its hands, is not a terrorist organization according to Erdoğan, who posted on Twitter in 2018:

“Reminder to Netanyahu: Hamas is not a terrorist organization and Palestinians are not terrorists. It is a resistance movement that defends the Palestinian homeland against an occupying power.”

Turkey, whose president openly issues threats against Jews, also rewards antisemitic officials with promotion. For instance, Kenan Yaşar, a judge who was elected by Turkey’s parliament to the Constitutional Court, had posted an antisemitic statement on Twitter. In 2012, Yaşar wrote on Twitter that Jews are “people who can burn the [whole] world to cook two eggs.”

The government of Turkey proudly enables Hamas in its military and financial endeavors. Its terrorists then go on to plot attacks and kill Israelis in an attempt to destroy the Jewish state. Those terrorists enjoy the privilege of Turkish citizenship, adopting Turkish names, traveling internationally with their Turkish passports, opening Turkish bank accounts, operating under the cover of Turkish companies or offices, and laundering millions of dollars. Hamas leaders are received by Turkey’s president in official meetings before the eyes of the whole world and speak at congresses of Turkey’s ruling party.

Uzay Bulut is a Turkish journalist formerly based in Ankara. She is also a research fellow for the Philos Project.