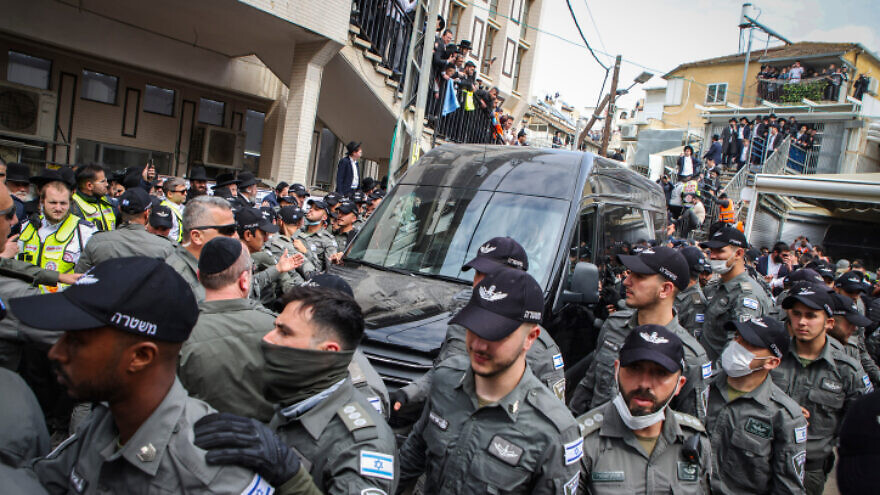 Mourners attend the funeral of Rabbi Chaim Kanievsky at the cemetery in the city of Bnei Brak, on March 20, 2022. Photo by David Cohen/Flash90.
Republish this article
836 WORDS
Spread the word.
Help JNS grow!
Share now:

(March 20, 2022 / JNS) Israel held its collective breath on Sunday as hundreds of thousands converged on Bnei Brak to take part in the funeral of Rabbi Chaim Kanievsky, 94, one of the most prominent scholars and influential leaders of the haredi world.

Almost a year after 45 haredi men and boys were trampled to death at a ceremony commemorating the anniversary of the death of Rabbi Shimon Bar Yochai in Meron during an annual Lag B’Omer festival, rabbis implored their followers to behave carefully to prevent a similar tragedy.

Israeli Prime Minister Naftali Bennett implored the public to safeguard one another stating, “I call on those attending the funeral not to crowd and not to push. The trauma of the Mount Meron disaster is still fresh for us. This tragedy cannot recur. I ask everyone to show personal responsibility, and mainly to watch over the children.”

Schools in the Tel Aviv area reverted to online learning for the day while commuters were told to stay home. Route 4, a major highway in the Tel Aviv area was closed to traffic for most of the day to accommodate more than 1,800 buses from every part of the country that ferried mourners in and out of the area.

Hundreds started arriving in the city of Bnei Brak on Saturday night to stake out positions as close as possible to either the Kanievsky home on Rashba Street or the cemetery less than a mile away.

On a regular day Bnei Brak, situated just outside Tel Aviv, is Israel’s most crowded city. Police estimated that more than 350,000 people descended on the area’s narrow streets Sunday to listen to the eulogies and to attempt to escort the revered rabbi to his final resting place.

Men and women stood on separate streets as they strained to hear the eulogies. Every rooftop and balcony were crammed with people, well beyond safety recommendations.

Kanievsky and his late wife raised their eight children in a two-bedroom home and were renowned for their modest lifestyle. Family members, easily distinguished by their torn shirts as the sign of mourning, appeared at the top of the stairway leading to the apartment to listen to the eulogies.

All three eulogies were heartfelt and delivered in the melodic, Yiddish-inflected Hebrew that marks haredi leaders.

As cameras panned the masses in their black jackets and hats and white shirts assembled below, it was clear that for many of the youngsters this was a permitted social gathering.

Family members and close associates of the rabbi scuffled for a position as Kanievsky’s body was carried down the stairs on a stretcher wrapped in a prayer shawl to a waiting black ambulance van.

Border Police lined up five deep on either side of the van in a vain attempt to prevent the masses from rushing forward to try to touch the vehicle carrying the revered rabbi. Crawling through the surging crowds, the van somehow managed to traverse the distance to the cemetery in about twenty minutes.

Police kept the public out of the large cemetery while the twenty close associates vied with each other to pull the stretcher out and bring the body to the waiting gravesite. The older pallbearers joined hands and circled the grave chanting psalms as police officers tried to hold back hundreds of men and youths who had broken through the barricades and ran in between the hundreds of gravestones to get closer to the action.

Bags of earth were quickly broken open to fill the grave as the emotional crowd pushed forward. One elderly man with a long white beard took off his jacket, climbed onto a neighboring grave, raised his arms to the heavens and exhorted the younger men to calm down.

Family members recited Kaddish and were escorted out. By then, several hundred were pushing to touch the grave and once the ceremonial aspects were concluded, the Police and Border Police withdrew to the sidelines leaving chaos at the site.

Meanwhile, a lone worker from the Magen David Adom (MDA) ambulance corps created a corridor that allowed the men to bend down, touch the ground of the grave and then be pushed out of the chaos.

Interviewed on Israeli TV Channel 11, a spokesperson for the police said that the situation remained “under control.”

As the crowds dispersed and streamed out in their thousands to the row of buses that stretched for almost a mile, political analysts were quick to pivot from the story of an overcrowded funeral, towards predictions of who would pick up the mantle of political power in the important voting bloc of the haredi world.