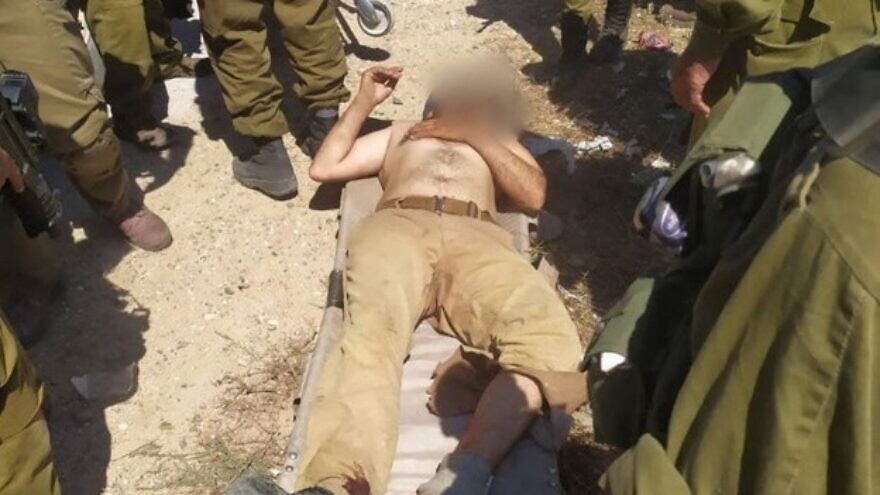 A terrorist who attempted to attack Israeli soldiers near the settlement of Yitzhar, in Samaria, lies with a gunshot wound to his ankle, July 14, 2021. Source: Yitzhar's Spokesperson's Office.
Spread the word.
Help JNS grow!
Share now:

(July 15, 2021 / JNS) The Israel Defense Forces shot and wounded a Palestinian terrorist who attacked soldiers near the settlement of Yitzhar in Samaria on Wednesday.

The suspect, a resident of the village of Madama near the city of Nablus, approached the soldiers and tried to injure them, reported Israel’s Channel 12 news. In the process of apprehending him, the soldiers shot him in the ankle.

Residents of Yitzhar claim that the attacker, who had a knife on him, was a released terrorist who had been violent before.

The incident followed an attack on Tuesday night when an Israeli security guard was lightly injured in a drive-by shooting at the Qalandiya checkpoint north of Jerusalem. The terrorist fired several rounds from a passing vehicle at a group of border guards and civilian security guards.

Video from the incident shows how the terrorist stopped his vehicle near the soldiers and guards, shot at them and fled, according to Channel 12. Soldiers returned fire at the escaping vehicle but the terrorist escaped.

Israeli Border Police and regular police carried out a dragnet search, and a short time later arrested the suspect, a 36-year-old from Aqab, a village north of Jerusalem.